When Republicans swept in the Tea Party election of 2010, they not only retook the House of Representatives and gained ground in the Senate. They also replenished the ranks of GOP governors with a new class (which, by the way, means there will be a much higher caliber of GOP presidential candidates in the years to come).

But the winners quickly found themselves in a tight spot. They were elected in the middle of the economic doldrums known as the Obama recovery, and they were elected on a promise to make things better. Expectations were pretty high, and they would be difficult to meet.

Moreover, because Republicans won in some pretty difficult states, it was clear from day one that they would have a tough time of it in 2014. So how are they doing?

Easy calls: If you’d been guessing at that time, you probably would have expected Ohio’s John Kasich to have a rough go of it. That seemed especially likely after a popular referendum reversed his attempt to reform public-sector unions. He later moved to the center, expanding Medicaid in an effort to shore up his prospects, but it was probably unnecessary from a political perspective. Democrats have put up an unelectable candidate against him. He will win in a walk.

Some of the easy winners are a bit less surprising. At one point, Democrats seemed to have an outside shot at ousting Iowa Gov. Terry Branstad, R, but his Democratic opponent has essentially given up, cutting off all television advertising. Their chances of beating New Mexico Gov. Susana Martinez, R, seem to have evaporated, a combination of her strength and the weakness of her ambitious opponent. They even talked up their chances of beating South Carolina Gov. Nikki Haley, R, who was last seen headed for a 60 percent victory. No Democrat of note could be bothered to take on Gov. Brian Sandoval, R.

Not-as-easy calls: A few Republican governors are in tough races, but still favored to win. The most important in this category is Gov. Rick Snyder, R-Mich., who dared push through a right-to-work law in Michigan, the union heartland. He may well live to tell the tale, as at this point he appears poised to win an uncomfortably narrow victory and a second term.

Georgia Gov. Nathan Deal, R, is also in a bit of trouble, thanks mostly to ethical problems, although he maintains a slim lead in most polls. His opponent, Jason Carter, D is cautiously framing himself as a moderate.

Although there is no public polling to support it, Republicans in Idaho express slight concerns about Gov. Butch Otter, R, who has a bit of a tougher race on his hands than expected against Democrat A.J. Balukoff. Otter, who is seeking a third term, is not Mister Popular — he survived a close shave in his primary, winning just 51 percent of the vote.

On the Precipice: Who would have thought that Kasich would skate by without a race while Sam Brownback, R, would face the wrath of Kansas voters? Brownback’s new school funding formula and his ongoing feud with moderate Republicans in his state have created the perfect storm and he now trails in the last four polls. He’s not done yet, but Brownback is the underdog at this point against Democratic attorney Paul Davis. He has a few cards up his sleeve, although they may not be aces.

In Alaska, Gov. Sean Parnell, R, also trails in a two-way race against independent candidate Bill Walker, who brought on the former Democratic nominee as his running-mate. Parnell is performing poorly in the same polls that show the Republicans’ Senate nominee, Dan Sullivan, leading incumbent Sen. Mark Begich, D, and that’s not a good sign.

In Pennsylvania, Gov. Tom Corbett, R, the moderate attorney general who won his current post in 2010, is a political dead man walking. This is in part due to his own mistakes, and in part due to a very active campaign by someone he isn’t even running against. The state’s Democratic attorney general, Kathleen Kane, tried hard to fuel the perception that Corbett had dragged his feet in investigating Jerry Sandusky at Penn State for political reasons. Her office eventually released a report that said it wasn’t so, but the damage was done and it can’t be undone. Corbett can’t win on this issue — on the other side, many Penn State fans still blame him for the death of Joe Paterno.

Still in the hunt: Three of the governors whose situation seemed extremely precarious after the 2010 election are still very much in the game.

The least surprising of these is Wisconsin Gov. Scott Walker, R, who won narrowly in 2010 and went big right away. His union reforms quickly created a legacy accomplishment — and brought upon him enduring union hostility. He then survived the resulting recall election and a rather bald-faced attempt by Democratic prosecutors to destroy him. His race is currently about where you’d expect it to be — as close as it gets. He will not get less than 47 percent of the vote, nor more than 53 percent. This race is especially important, because a victory makes Walker an excellent bet as the consensus candidate for 2016.

In Maine, the foul-mouthed and proud Gov. Paul LePage, R, is neck and neck with Rep. Mike Michaud, D, but the incredible thing is that he has any chance at all. His party lost its legislative majority in 2012, and he only won the first time with the unwitting help of others — Democrats nominated an abysmal candidate, who split the left-leaning vote with the vote-sucking independent candidacy of the liberal Eliot Cutler. Democrats found a good candidate this time in Michaud, who will at least finish in second place (unlike Libby Mitchell, the Dem nominee in 2010), but Cutler is still pulling enough of the vote away to help LePage once again. He will need to score nearly 20 percent for LePage to pull off a surprising upset victory.

In Florida, Gov. Rick Scott, R, seemed a sure bet to lose just a few months ago, but he has since proven to be surprisingly resilient. He isn’t out of the woods yet, but he appears to be in the lead — with the exception of one outlier poll — thanks to superior campaign resources and a deeply problematic opponent in former Gov. Charlie Crist, D. Crist, formerly a Republican, has changed his views on pretty much every issue, but he hasn’t changed his habit of blowing big leads in the polls, as he did in his 2010 Senate primary against Sen. Marco Rubio, R.

A few other governors’ races that are interesting, for one reason or another:

Massachusetts: Yes, it’s Massachusetts, but it’s actually unusual for it to have a Democratic governor. The exiting Deval Patrick, D, is actually the first since Michael Dukakis. And the Democratic nominee this year is Attorney General Martha Coakley, best known for choking in her epic 2010 race against Republican Scott Brown. Three of the last four polls — including a Boston Globe poll — show her trailing. Democrats have seen this show before, she’s on the verge of blowing it again.

The Republican nominee, Charlie Baker, is a liberal Republican, to be sure, but that’s also typical of Massachusetts governors.

Rhode Island: I know, right? But the state has not elected a Democrat as governor since 1992, and there is a serious possibility the streak will hold up through 2018.

Gina Raimondo, the Democrats’ nominee, has a few nagging problems. One is that the unions are not enthusiastic about her, due to her endorsement as state treasurer of a pension reform plan that could have been proposed by a conservative. The other is money — her campaign is in bad enough shape that her state party may have broken Rhode Island’s stringent campaign finance laws in order to run an ad on her behalf.

This ad contains a brief cameo by Sen. Jack Reed, D (who is in no danger of losing re-election) for the sole purpose of circumventing state campaign finance law, which allows parties to spend no more than $25,000 on behalf of candidates for state office.

With her support flagging the with the public employee unions, Raimondo has aggressively courted social liberals, even calling for re-legalization of partial-birth abortion, which has been illegal for more than a decade.

The problem is, this is not necessarily the wisest tack in Rhode Island. It’s a heavily Democratic state, but it is also more pro-life than your average Democratic state, and its voters have not generally treated abortion as a litmus test as in other Democratic states. Many Rhode Island Democrats belong to that endangered species — the white ethnic blue-collar working-class Democrat. For a candidate who has lost the good will of the state’s unions, this is actually a bit risky. The state’s voters have previously elected pro-life Democrats and Republicans (such as Gov. Don Carcieri). For what it’s worth, Allan Fung, the Republican nominee, calls himself a moderate on the issue.

New York: No, the race isn’t that interesting, as Republican Rob Astorino trails by a massive margin. But he has nothing to lose, so you know what they say — YOLO! Oldsters might get the reference here: 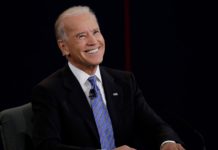 Trump would have been blamed for Texas

The seven Republican senators who voted to impeach