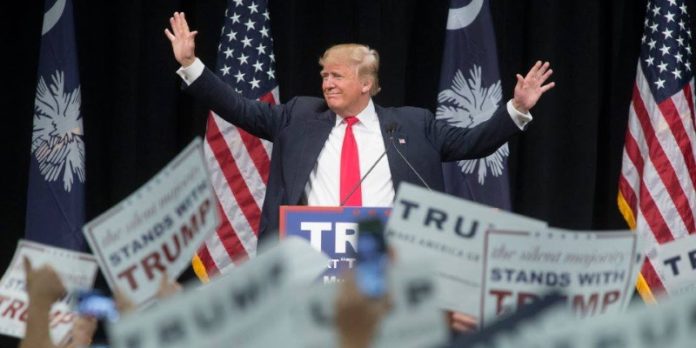 Happy Presidents’ Day to all our readers.

This, from his comments last week, is going to be a big part of President Trump’s pitch for re-election.

It echoes the old complaint about the Democrats of the 1970s: that they were the party of the three A’s: “Amnesty, abortion, and acid,” in the then-anonymized words of the late Democratic senator Thomas Eagleton. Eagleton’s complaint was an observation about what would happen to the party if George McGovern were nominated.This time, it’s Trump pointing it out, but it’s no less true for that.

In 1972, the Three A’s referred to the drug LSD, universal pardons for draft-dodgers, and the killing of the unborn. As the Democrats shifted leftward during the Nixon era, the three A’s helped turn millions of ethnic working-class northern voters into Nixon supporters, if not into Republicans in the long run. This led immediately to the 1972 landslide and eventually to the 1980 Reagan Revolution.

So never mind another landslide: Can the Democrats’ excesses lead to a Trump majority in 2020 as well? Or is that well dry at this point? Are American voters finally buying into the new cultural radicalism? Can Trump make this thing work?

That last question is the hardest to answer. So many doubted in 2016 that Reagan Democrats were even still a thing. Trump managed to prove everyone wrong with his stunning victory.

Obviously, now Trump is hoping take Democrats’ excesses — driving away jobs from their own states and districts, supporting live-birth abortions, and pulling down border walls — to replicate Richard Nixon’s 1972 success. And Democrats, with their growing extremism on immigration, abortion, and other issues, seem determined to make this retro experiment happen.

Some conservative supporters of Trump are furious over his

giving in to House Democrats on the border funding deal. Instead of the roughly $6 billion he was demanding, Trump actually settled for less money than he could have gotten in the first place.

Did he chicken out and back down? Or was his mistake in inviting this confrontation in the first place?

Frankly, the issue is somewhat overblown. This was a loss that Trump probably had to be talked into taking. But it’s the only course that makes sense in the long run.

The first thing to keep in mind that the fate of Trump’s border wall depends entirely on his re-election. Democrats are currently embracing an agenda openly in favor of open borders, zero deportations, and no border barriers, and they’ll follow through on that if they win. So if Trump goes down in history as the president who kept the government shut for months or a year, it just puts them that much closer to attaining their goal.

For Trump, this was a loss. But it was also not the moment to die on this hill. He accepted the deal in the knowledge that he would be making the emergency declaration shortly thereafter, to find money and build the wall anyway. Although it will be challenged in court, this means Trump can say he kept his word — and that’s important as his re-election battle approaches.

Second, with Republicans certain to take the blame for any further government shutdowns, House Democrats (as well as Senate Democrats) had absolutely no incentive to give Trump the money he wanted for the wall. They would have had every reason to refuse it, and Trump had no leverage to use against them.

So from Trump’s perspective, why die (politically speaking) on this hill while approaching re-election, if you can get the funding in any other way?

Trump can now enter the campaign phase blaming Democrats for being unserious about border security. And he’ll now have better evidence for this point than he did when he made the same point in 2016.

Will it work? Well, nobody thought it would work then, either.

Kelly is by far the stronger candidate of the two Democrats, and his enormous fundraising haul immediately upon entering the race could help him clear the field.

The same poll suggests that McSally, despite losing last year’s Senate race, has good approval numbers in the state so far.

Georgia: Both before and after her Democratic State of the Union response, Stacey Abrams had been considering a run against Sen. David Perdue, R, in 2020. She is set to make up her mind in March.

National Democrats really want her to run and put this seat into contention. But this may not be the best choice from her own perspective. Yes, it could be a good race to run below the presidential line, given that Trump underperformed badly in Georgia in 2016. But Abrams came up just short in 2018, but that was in a good Democratic year against a weak Republican candidate (Republican Gov. Brian Kemp). A rematch with Kemp, already somewhat unpopular, has to be more attractive than a fight against Perdue, a wealthy self-funding incumbent with an inoffensive record and a net 18-point positive approval rating.

Republicans absolutely cannot afford to lose this seat. Their prospects of a continued Senate majority depend on it — and that goes doubly if Trump loses re-election and a Democratic vice president presides over the Senate.