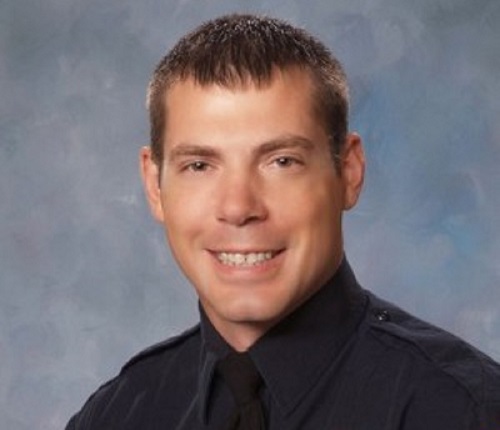 Lansing Firefighter Dennis Rodeman survived a tour of Iraq while serving his country as a Marine, but the 35 year old was ambushed and killed Thursday on American streets, targeted by an upset man in a truck who ran him over after a brief argument.

Rodeman, a seven year veteran of the Lansing Fire Department, was collecting donations at a Lansing intersection for Muscular Distrophy when an argument ensued with a passing motorist.

According to the Lansing State Journal:

Police said there was a verbal exchange between the suspect and Rodeman moments before the incident.

“The suspect came by, was upset for whatever reason (and) circled back around” before running into the firefighter, Kraus said. “The preliminary investigation is that he deliberately hit the firefighter who was standing in the road, collecting for the charity.”

Rodeman was married just a few months ago and his wife is preagnant with the couple’s first child.

Witnesses say the hit and run was clearly deliberate.

“Tionna Davis said she was driving south on Cedar Street when a northbound vehicle swerved from the right lane into the left lane and hit the firefighter. One of the boots the firefighter was wearing hit her car, she said.

“He literally tried to hit him,” she said, referring to the suspect.”

Lansing Mayor Virg Bernero praised Rodeman for his service to Lansing, and to America.

He served his country with great pride, bravery and ability, having survived a tour of duty in Fallujah, Iraq, one of the most dangerous places in the world, It is beyond comprehension that this American hero lost his life on the streets of Lansing while collecting charitable contributions for children afflicted by muscular dystrophy.

The suspect is being detained on suspicion of murder and charges may be filed imminently.

>>>A “Go Fund Me” account has been set up to help his family and has raised over $10o,000 in just a few days. The page can be viewed HERE