Clinton and trade: “You can not endorse for president. That’s conceivable if both candidates weren’t interested in raising wages.”

This threat, coming from AFL-CIO bigwig Richard Trumka, clearly refers to a

general election, not a primary. He is threatening to withhold his mega-union organization’s endorsement if Hillary Clinton comes out in favor of the Trans-Pacific Partnership trade agreement that she quite openly endorsed while serving as secretary of State. The union’s contention is that foreign competition drives down wages, and that somehow this can be avoided by setting up obstacles to free trade.

The threat puts Clinton in a bit of a difficult position. Not an impossible one, but a difficult one.

One might be inclined, based on events so far, to think that election 2016 is only about juicy Clinton scandals. Not so! In fact, there are real issues to be discussed as well, and this is one that loom large for at least the rest of 2015, if not well into next year.

At this point, though, no one believes Hillary can be blocked from the Democratic nomination. The only leverage that Democratic-leaning constituencies have against her is the fact she needs them to become president, and she is definitely not a shoo-in for the general election. So Trumka’s threat is no small matter. No presidential campaign can afford to write off an important base constituency — especially when it’s a constituency that provides most of the party’s get-out-the-vote shock troops.

This is an under-discussed issue within the Democratic base. Discussions of Hillary Clinton’s weaknesses as a presidential candidate usually involve the likelihood that black voter turnout will recede in 2016 from its Obama-era levels. This seems almost inevitable, given the unique nature of Obama as the first black national-level politician with realistic presidential ambitions (in 2008), and then as the first black president seeking to retain his office (in 2012).

A look at vote margins in the last four presidential elections illustrates not just how critical the black vote is for the party, but also what it means for Democrats if it returns to pre-Obama turnout levels and voting patterns:

The bottom row shows the overall victory margin in the popular vote. The top row shows black voters’ contribution to that margin — in each case, larger than the margin itself. But the main point here is the difference between the black margins in 2000/2004 and those in 2008/2012. A reversion to pre-Obama voting patterns among blacks would shave 3 or 4 points off the Democrats’ overall advantage before a single shot is fired. The chart also shows that Democrats can thank the Obama-era boost in black voting for nearly all of their 2012 popular vote victory margin.

Now, Trumka’s threat to Hillary brings up the question of labor unions. They are also a big part of the Democratic demographic story, but a less triumphalist and therefore less-discussed part. Union households make up a declining segment of the electorate, comprising 26, 24, 21, and 18 percent of the vote in the last four presidential elections, chronologically. Here are the overall margins within the national electorate that union households have been giving to Democrats:

Again, the bottom row is the overall Democratic margin in the last four presidential races, and the top row shows unions’ contributions to that margin. These numbers provide further evidence (in addition to the statistics released annually by the Department of Labor) that unions are dying on the vine. But they also illustrate where Democrats stand at the margins. In a trend that predates Obama (and really has nothing to do with him), Democrats have lost about 2.5 margin-points since 2000, even amid declining Republican performances, because of declining numbers and declining Democratic partisanship among union households.

This is one of the factors offsetting and preventing whatever racial/demographic miracle Democrats have been expecting since the 1990s to make them a permanent majority. (The decline of union political influence is probably also contributing to white voters’ increasing Republican lean. Two other potential factors: The old-age deaths of white Democrats who lived through the FDR era and of the last die-hard Southern Democratic voters for whom voting Democrat was a statement of Southern nationalism.)

One could argue that this chart makes the case that Trumka cannot afford to snub Clinton, so is he really in a position to make this threat at all? Organized Labor’s net value to Democrats is small and shrinking, at least in terms of votes. If he sidelines the AFL-CIO in 2016, Trumka might be left with no meaningful endorsement to confer in 2020. With the federal courts cracking down on union chiseling from welfare programs, and Midwestern states suddenly adopting right-to-work laws, union membership and union influence are sure to continue declining.

Then again, one cannot overestimate the value of the union contribution to Democrats in terms of muscle and manpower — those phone banks and canvassing drives don’t man themselves. Moreover, every little bit is going to matter for Hillary, especially if black turnout sags as expected.

The trade issue is a particularly complicated one for Democrats to negotiate — a microcosm, if you will, for the Democrats’ typical problem of a base fragmented between so many constituencies with little in common. Believe it or not, most Democratic voters are actually soft supporters of free trade — a recent Pew poll found them to be even more supportive of trade agreements than Republican voters (perhaps in part because of Obama’s current influence). Hispanic voters — representatives of that critical growing demographic — are, by far, the most supportive of free trade agreements.

But an important hard core of the Democratic Party detests free trade, and because its preference is so much stronger, it must be pandered to.

During the 2008 election, then-Senator Obama played a bit of a two-faced game

on trade. He spoke in public (especially in places like Ohio) about how he wanted to renegotiate NAFTA. Simultaneously, he sent advisors to tell NAFTA trading partners (that is, the Canadian government) that he was being insincere and they had nothing to worry about. The advisors were, of course, telling the truth, as Obama is not only a defender of NAFTA but also angling to create new trade agreements.

Clinton probably can do no better on the issue now than Obama did then. She has to fine a minimally plausible way to prevaricate and leave it at that until trade becomes a moot point.

It hurts Clinton even more that she vocally supported the TPP as secretary of State, calling it a “gold standard” in terms of the various excuses unions use to subvert free trade agreements — human rights for foreign workers, for example. And frankly, she would look ridiculous at this point if she reversed herself on the deal now.

So she will have to find a new reason to oppose it — to assert that it is now somehow different than when she voiced such gushing praise for it in her official capacity as a cabinet secretary. Either that, or expect an extremely uncomfortable silence on the issue for quite some time to come.

Foreign policy: If trade is awkward for Democrats, how about foreign policy for Republicans? Sen. Rand Paul, R-Ky., used a television interview on Morning Joe to blame Republican neocons for the rise of the Islamic State, on the grounds that their military interventions had left so many weapons for ISIS to seize.

This was not necessarily the strongest statement of the libertarian worldview, but 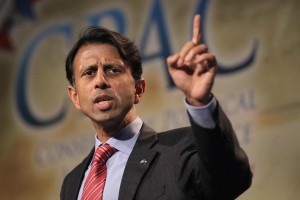 it was scathing. And other Republicans’ responses were scathing as well. For example, Louisiana Gov. Bobby Jindal called Paul “unsuited” to be president, and compared him not only to liberals, Democrats, and attendees of Georgetown cocktail parties, but also to commentators on al-Jazeera.

Perhaps it seems ugly, but this is actually a healthy debate for Republicans to have right now. With some Republicans struggling to offer either a coherent defense or an apology for an Iraq war that is pretty much universally regarded as a mistake today, Paul serves a purpose by rocking the boat, even if his accusation is a bit too broad and his level of collegiality less than ideal. Republicans must address Iraq in some way, as it represents the undoing of George W. Bush’s administration and is largely responsible for the rise of Obama.

In the future, Republicans will need to unite (more or less) around a more judicious foreign policy. Even those who support the use of American military might to advance various goals have to acknowledge that there are limits to where it should be used, and that those limits properly established would probably preclude a repeat of the Iraq War, were it presented as a possibility again today.