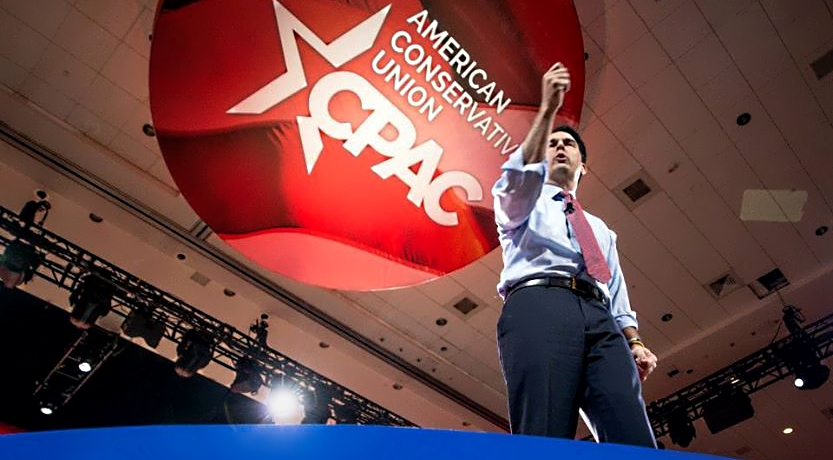 To: Our Readers
From: David Freddoso

This is the Scott Walker moment — how long it will last is anyone’s guess.

Before his reelection, the Wisconsin governor was usually an asterisk in the way-too-early presidential polls. He posted a gentleman’s sixth-place in the straw poll at CPAC last year. Now, he’s the frontrunner in Iowa, the mainstream Jeb Bush alternative, and the media’s number one target.

We’ve described Walker’s advantages here previously: He’s demonstrated his conservative bona fides to the point that he probably doesn’t have to pander much (although he might anyway). He’s demonstrated his ability to win independent voters in a purple state. He has survived a veritable inquisition, and it seems unlikely that any damaging stone has remained unturned. He is a governor, a close friend of the RNC chairman, and he has the potential to unite the conservative and establishment segments of the Republican Party.

Up to now, Walker had been many conservatives’ second choice. His biggest problem was his need to win reelection. Without winning a second term, he could hardly lay a claim on the big prize. With that test behind him, Republican primary voters are giving him a more serious look, and liking what they’re seeing. He is scoring well in poll after poll, despite having lower name recognition than most of his rivals. That leaves plenty of room for growth in support. And Walker will get even more attention this week when he signs legislation making Wisconsin the 25th right to work state.

Then again, it wasn’t long ago that New Jersey Gov. Chris Christie was being talked about the same way. Nothing is permanent — but can it last for a full year before Iowans caucus?.

Nearly all of the viable Republican hopefuls for president showed up to speak at the Conservative Political Action Conference over the weekend. A few thoughts on the prospects of top contenders based on what happened there.

At a conference where hawkish speeches were the norm, Paul stood out. And his speech on Friday, though delayed by a vote in the Senate, was very well-received.

Paul also won the straw poll, but by a margin much smaller than he has in the past. Close finishes tend to be rare — last year, for example, Paul nearly tripled his nearest rival’s tally at 31 percent. He owned that CPAC. This time he got just 25.7 percent to Scott Walker’s 21.4 percent. The audience gasped audibly when it was announced from the stage that the top two finishers were so close.

In terms of the nomination, the CPAC straw poll is not really indicative of much. But it tests the pulse ofthe community of the most active conservatives. Paul has three-peated in the CPAC straw poll by getting out the vote out at CPAC (which includes helping bring in supporters), and also by being the favorite of the younger conservatives who typically attend. (Half of this year’s CPAC-goers were under age 25 — both a cause and an effect of Paul’s grip on the conference.)

As always, Paul’s supporters were evident throughout the venue the entire time. The Paulotroopers especial made themselves seen and heard around the time of his speech on Friday afternoon.

The narrow win isn’t bad news for Paul. (A loss would have been rather embarrassing.) But the outcome illustrates that Paul is not the hands-down default choice among hard-core conservatives to stop Jeb Bush.

The straw poll did, however, contain what might be considered a pleasant surprise for Paul. He was the second choice of 16 percent — far more than one might have expected. This suggests that his potential base of support — among the active Right, anyway — is not at all limited to the die-hards who showed up for the main purpose of voting for him. (It could be, however, that the polling software allowed people to choose the same candidate twice, in which case this is much less impressive.) When second choices were added in, Paul’s lead over Scott Walker narrowed by only two points — 42 to 40 percent. If mainstream GOP primary voters are anywhere near as open to Paul’s ideas as the non-Paul trooper CPAC-goers were, then his chances are significantly better than the conventional wisdom suggests.

Even so, Paul has the more difficult task of selling Republicans on ideas they might consider unorthodox. Others only need to sell themselves as the true conservative in the race. 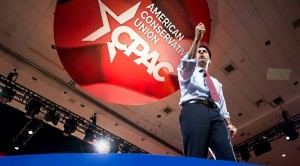 He’s the loser of the straw poll but the big winner of CPAC. Walker finished four points behindPaul after attendees enthusiastically received his speech (even though it was only so-so), and buzzed about the brutal, unfair treatment he had lately received from liberal media outlets. During CPAC, Walker was tendentiously hammered for making a point about his personal fortitude (it was construed as a comparison of his critics in Wisconsin to ISIS) and falsely accused of going easy on rapists on college campuses. The first story stuck to some degree in the media universe, the second was hurriedly retracted when proven false.

A quiet formal effort to turn out Walker supporters apparently did exist at CPAC 2015, but you wouldn’t have known it. It was so stealthy that it is very hard to think it was solely responsible for the result. Not a single Walker 2016 sticker could be seen (even Cruz and Carson had stickers everywhere); not a single Walker t-shirt was on display; no throngs of identifiable Walker foot soldiers roamed the halls or showed up just in time to pack the hall for his speech (as they did for both Paul and Jeb).

Simply put, there are many conservatives who do not want to nominate another Bush and are at least somewhat wary of Paul’s foreign policy views. For them, Walker seems like the most obvious choice.

Walker’s weaknesses were on display at CPAC as well. He still needs polishing. He is light on details about foreign policy. He tends to force his delivery and take on airs while speaking. He should probably be doing the opposite — just being himself, playing up the everyman persona that makes him so unlike Mitt Romney.

There is time for working on all that. In the meantime, as the polls in Iowa suggest, Walker is clearly the man to beat. 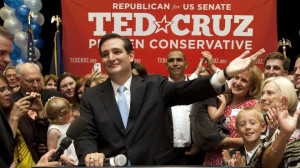 Cruz, who finished a distant but respectable third place with 11.5 percent, was clearly admired by people at CPAC. He was warmly received, and during the final recap video, his repeated appearances on screen drew cheers. But evidently, people there don’t think of him as a presidential candidate.

Cruz did have an organized campaign on scene — “Cruz Crew” paraphernalia was present, if not as ubiquitous as Paul’s or even Jeb’s supporters. 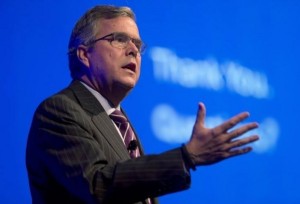 He wasn’t completely wiped out — and that’s better than a sharp stick in the eye. Yes, he bussed in supporters from downtown D.C., but who doesn’t? Bush at least beat expectations with his fifth-place finish (8.3 percent), even if it wasn’t a very impressive tally in the abstract. In 2014, Jeb delivered one of the keynote speeches at CPAC, and they left him off the straw poll — which was exactly what he wanted. He was going for a non-embarrassing result. This time, he got it. And he handled his Q&A with Sean Hannity quite well.

That didn’t mean he was spared rough treatment. The general tone and attitude toward Jeb at CPAC was actually quite hostile. Laura Ingraham’s one-liner about his wife’s spending habits probably went beyond the comfort zone of most attendees, but in general they and several speakers had little nice to say about Bush. A small walk-out was also staged when he took the dais.

It is strange to see so much revulsion on the Right toward a governor who had such a conservative record in office. But the straw poll revealed that Common Core and immigration reform were, respectively, the second and third most common dealbreakers for those in attendance. It’s a problem that will surely haunt him right up until the Iowa caucuses. 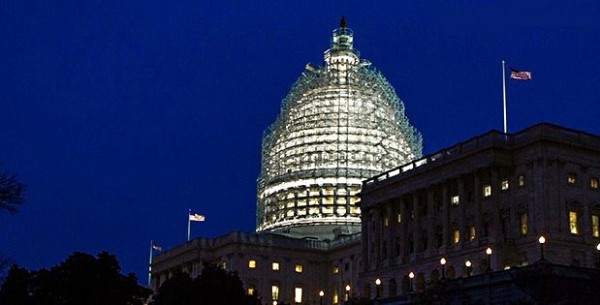 Voters in New York and Mississippi will head to the polls in May to fill vacant seats in Congress.

Michael Grimm, R, left a vacancy when he resigned from the House after winning re-election, due to his guilty plea on tax charges. The May 5 ballot already appears to be set in stone, with nominees chosen by party bosses — Daniel Donovan, the district attorney on Staten Island, will be the Republican, and Vinnie Gentile, a former state Senator from southwest Brooklyn and a current city councilman, will be the Democrat.

Donovan’s failure to obtain an indictment against the policeman who choked Eric Garner was very unpopular nationwide — not so in Staten Island, a.k.a. Cop City.

Gentile was not the Democrats’ first choice. He not only comes from the wrong part of the district (the Brooklyn side) and has a bit of baggage (a sexual harassment claim by a male staffer he now calls a “disgruntled employee”) but he faces an extremely formidable opponent in Donovan. The DCCC, recognizing this, released a poll several weeks ago showing Donovan to be almost bulletproof — a nice excuse for the committee to save some money by staying out.

The jungle primary election to replace the recently deceased Rep. Alan Nunnelee, R, will take place May 12. The field is sure to be crowded,, with Republicans overwhelmingly favored to hold the seat. The filing deadline is March 27, at which point the state of the race will become clearer. But as Roll Call reports, the potential certainly exists for another brutal Tea Party versus establishment smackdown, complete with involvement from state Sen. Chris McDaniel himself.