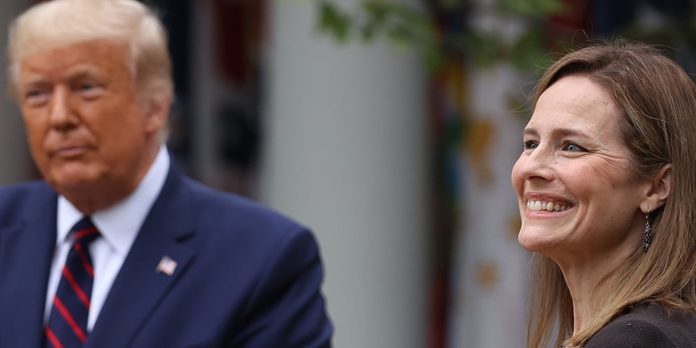 President Trump, we observed last week, needed a complete change in the dynamic of the presidential race in order to survive. With the nomination of Amy Coney Barrett to replace the late Justice Ruth Bader Ginsburg on the Supreme Court, he may be creating his own October Surprise.

The presidential race was shaping up as a near-certain loss for Trump. He trailed (and the polls have not changed yet in this regard) in many key states. It seemed unlikely that he could make up the difference through any sort of conventional campaigning or even through a catastrophic Joe Biden failure in the coming debates.

Yet with the coronavirus preventing the traditional elements of a campaign from coming together, a Supreme Court fight will almost completely subsume all presidential coverage. It will force a completely different sort of confrontation that will substitute for the presidential race and call all partisans back to the trenches for a fight that matters.

New dynamic: An ugly, anti-Christian Supreme Court confrontation between Democrats and a judge capable of winning over public opinion will have the effect of turning the entire presidential election from a referendum on Trump’s temperament and leadership into a referendum on wokeness and cultural decline.

Barrett, who to all accounts seems bulletproof against charges of impropriety, incompetence, or racism (her black adopted children would surely differ), could just be the ideal person to go to war over. An accomplished professional woman, a devout Christian from a large denomination (Catholic) whose adherents Trump must win over, and a true-blue conservative judge whose appointment means a sea-change for the Supreme Court, she is the pitch-perfect nominee.

What’s more, Trump would not have picked her without Mitch McConnell’s assurance that the votes are there to confirm her.

Perhaps it won’t guarantee him re-election, but Trump has picked exactly the right fight here, just as we suggested last week. Not only does he have nothing to lose, but in fact this is good for his electoral chances. He can only benefit from such a confrontation. It changes the presidential race to something less unfavorable to him than what existed before.

Resignation? Democrats have had a relatively muted official reaction so far. The Biden campaign is lamely raising money by claiming that Barrett’s confirmation to the court will be bad for healthcare. This evinces deep fears over a culture-war confrontation focused mostly on abortion, transgenderism, freedom of religion, and the like. Are Democrats proud of tying up the Little Sisters of the Poor in court for a decade (and still losing)? Or are they a bit ashamed of themselves for this, recognizing that voters might not be quite so excited about such a dubious accomplishment?

The big question — the thing to watch for during the early October hearings — is whether Sen. Kamala Harris, Biden’s running mate, plays a large role from her position on the judiciary committee in trying to derail Barrett’s nomination. If she takes a secondary role or even backs out with the excuse that she needs to be campaigning, it is a sign that Democrats recognize this fight as toxic to their chances in 2020. If she takes an outsized role, on the other hand, it could be a sign that Democrats relish this fight and want to have it here and now, recognizing a potential to raise money from it that they judge outweighs any toxic electoral effects.

Court-packing: The real danger behind Barrett’s nomination, as some would argue, anyway, is that Democrats will win the subsequent elections for president and Senate, then retaliate by abolishing the filibuster, then adding four additional justices to the Supreme Court, then appointing four leftists.

Although this is possible, the chances that they will actually follow through with such a plan are less than you might expect — especially in the 50-50 Senate that seems like a perfectly plausible result of the coming election. With Biden already non-committal, it is unlikely that, given a chance to cement his popularity with early, unifying gestures, he will move rapidly to pack the court after being sworn in this coming January.

Sept. 29 Debate: There has been an exaggerated expectations game surrounding this Tuesday’s debate. The media keep raising the question of whether, by over-hyping Biden’s supposed senility, Trump hasn’t made it too easy for the former veep to succeed. At this point, they argue, Trump has overdone it such that Biden will win the debate  if he can only manage not to drool all over himself.

This is all probably too clever by half. There is indeed a point to Trump’s repeatedly drawing attention to Biden’s loss of mental acuity. It means that if Biden stumbles, even slightly, people watching on Tuesday will not be able to miss it. They will not be able to avoid connecting it, in their minds, to his approaching senility and to the possibility that they are actually electing the far more radical Kamala Harris if they vote for him.

And frankly, the chances that Biden will have a few bad moments seem enormous, given the quality of his public appearances to date.

Biden’s campaign called a “lid” — i.e., announced that he will not appear in public any further for the day — before 10 a.m. several days last week. The best explanation for Biden is that this was debate prep time, but it is astounding how much he seems to have taken. Otherwise, such an early lid presents other unflattering ideas about his campaign work ethic and his ability to handle the rigors of the presidency.