A happy President’s Day to all our readers. On the occasion of George Washington’s birthday, we are thick in the season of the very sort of factionalism and party politics that he most abhorred.

Never-Sanders: Bernie Sanders’ win in New Hampshire came with less than 26 percent of the vote.

This showing, just a hair ahead of Pete Buttigieg and just six points ahead of Amy Klobuchar,  helps explain why Democrats are not necessarily at the point of giving up on saving their party from socialism — or at least from a “socialist” label that Sanders embraces, which could destroy them up and down the ticket in certain key states.

At this point, Joe Biden has performed so poorly that his campaign is over, he just doesn’t realize it yet. Even his lead in South Carolina is now vanishing, as the black voters who had been supporting him look for a viable alternative. The only reason Biden remains in the race now is the massive delay in reporting of Iowa results. This all works to Sanders’ benefit.

So does the rise of the obscure Klobuchar, who at this point is probably the Democrat whom Republicans fear most as a candidate but would be most comfortable having as president if they had to choose from the real contenders. Her surge came too late for Iowa, but again, the delay meant that this didn’t matter.

Her strong third place in New Hampshire last week could help split the moderate Biden-second-choice vote going forward. This is especially important now, as the primaries approach in which former New York City Mayor Michael Bloomberg is spending untold millions. If Bloomberg successfully frames himself as the alternative to running under a socialist banner, he could bring many Democrats to his side. However, if he defeats Sanders by massively outspending him, all the while dropping hints and even far-fetched possibilities pointing to himself as the “Clinton candidate,” then the resulting bitterness will be palpable.

Contested convention: On the other hand, if Bloomberg fails to unite the center-left — his comments and record on stop-and-frisk could harm him in Southern primaries where blacks cast most of the votes — then the possibility of a contested convention looms — a convention where Sanders would likely lose and bad feelings on the Left could be worse than ever before.

Okay, fine — contested conventions are always predicated and never occur. But this is a much stronger possibility than it ever was in 2016. Unlike the Republicans, Democrats allocate most of their convention delegates proportionally according to the percentage of votes won in a state. Sanders’ underwhelming 26 percent victory in New Hampshire could thus be a sign of things to come. If multiple non-Sanders candidates keep getting more than 15 percent of the vote in multiple states, no one will be able to assemble a delegate majority.

The current delegate leader is actually Buttigieg. But he is expected to perform very poorly with Southern black voters in coming primaries, both due to his homosexuality and due to his controversial record on race as mayor of South Bend. Yet  he may do very well in California — the locus of much of his fundraising and already a spot where he’s focused his campaigning — and some other Super Tuesday states on March 3. A strong California performance keeps him in the race beyond Super Tuesday.

And this is where the traffic jam occurs. Just imagine the scenario where Sanders keeps winning various states with 30 percent of the vote, while Buttigieg, Klobuchar, and Bloomberg keep winning their share of delegates. This sets the stage for a July convention where, on the second or third round, unelected super-delegates, freed from earlier obligations, choose the nominee, and it isn’t Bernie Sanders. How will his supporters react? Do they dread another four years of Trump so much that they’ll overlook a second such slight?

The same question could be asked of establishment Democrats if Sanders does get the nomination. Will Democrats try to distance themselves from an unconventional and potentially dangerous nominee, as some Republicans did from Trump in 2016? Will they regret doing so? How will Democrats maintain unity under such circumstances?

Nevada: Democrats in Nevada will caucus on Saturday, Feb. 22. The big story so far has been Biden’s collapse — he once held a sizeable lead, but the only poll taken this month shows him falling off and Sanders opening up a lead with 25 percent support. Again, this could result in a modest Sanders plurality victory of the sort that raises the specter of a contested convention.

As many as six candidates are within striking distance of qualifying for delegates in Nevada (this is a state where the otherwise-irrelevant Tom Steyer has spent a lot of his money), and Mike Bloomberg isn’t even one of them. That’s a big problem if you’re rooting (as many Democrats are) for the field to consolidate and for the party to get behind someone at last, to focus on taking out Trump.

Wisconsin Supreme Court: One other note. This spring, both parties will have an opportunity to test their electoral armies and weapons in the crucial swing state of Wisconsin.

Voters will select two nominees for the state Supreme Court on Tuesday, February 18. Currently, the court has a 5-2 conservative majority, of which Justice Daniel Kelly, an appointee of former Gov. Scott Walker, R, is part. This stage of the race is not necessarily the most crucial — it’s just a top-two primary — but the general election on April 7 is a must-watch affair and could say a lot about how President Trump performs this fall.

Kelly is a shoo-in for one of the top-two slots to appear on the general election ballot. He will face either Marquette law professor Ed Fallone or Dane County (Madison) Circuit Court Judge Jill Karofsky, both of whom promise to join the court’s liberal wing if victorious.

The significance of this office came to national attention in 2011, right after Scott Walker came to power, passed and signed the revolutionary Act 10, limiting state employee union privileges. In April 2011, the race between conservative David Prosser and JoAnne Kloppenberg ended very narrowly in Prosser’s favor, preserving the court’s 4-3 conservative majority and guaranteeing that Walker’s reforms would be permitted to take effect.

The reforms proved wildly popular and tremendously benefited local governments especially. This has resulted in a political sea change that has included Republican victories in the state legislature, for president in 2016, and in most statewide elections since 2010. Despite Walker’s narrow loss in his 2018 bid for a third term, Republicans found themselves newly invigorated after a decade of Democratic dominance.

In short, state Supreme Court races matter. A lot. Pennsylvania provides a counterexample. Democrats seized the court there in 2015 when Republicans were caught napping. The new liberal majority would eventually overturn the congressional map drawn by the Republican state legislature, helping Democrats win back the U.S. House in 2018. Note that former U.S. Attorney General Eric Holder’s Democratic gerrymandering non-profit spent a tidy six-figure sum backing the liberal candidate in 2019, hoping to bring about a similar result there.

The Wisconsin court has been in conservative hands since 2008. But the surprise victory of conservative Brian Hagedorn in 2019 boosted the conservative majority to 5-2. This means the Left cannot win the court back this year even if one of the Democratic candidates wins this race in April.

Fallone, who has previously run for state Supreme Court, is something of an iconoclast but not to the point of being a perennial candidate. He is taken seriously enough on the Left that he does have prominent Democratic officeholders supporting him. Karofsky’s support, however, is much broader within the Democratic Party, and with $413,000 raised as of early this month, she has badly beaten Fallone in fundraising.

Kelly, meanwhile, had raised nearly a million dollars as of the beginning of February, and will probably begin the general election cycle later this week having already raised more money than either of the 2019 Supreme Court candidates raised in their entire election race.

Again, this election will provide Democrats and the Trump campaign an opportunity to put their turnout machinery to the test in a crucial presidential-year state. Expect to see it hotly contested. Turnout will be easily north of the 1.2 million who voted in 2019 — probably also higher than the record-setting 1.95 million who turned out for the Supreme Court race in 2016. 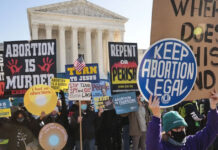 Dems, looking for a lifeline, lean into abortion 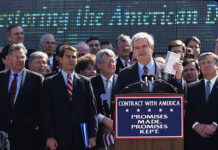 How bad could things get for House Dems?