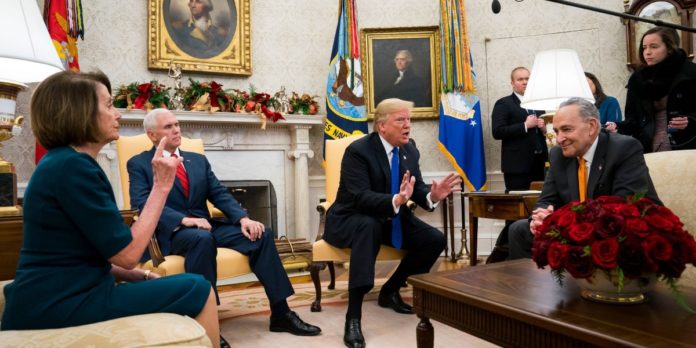 When President Trump squared off last week in the Oval Office against Nancy Pelosi and Chuck Schumer, he said at least one thing that most presidents wouldn’t. He pre-emptively owned the government shutdown he threatened in the event that he didn’t get the $5 billion he wants for his border wall.

If you know anything so far about Trump’s presidency, you have to wonder whether he won’t just go ahead and do it. Trump has been willing to do so many things that no other president would. That includes, for example, moving the U.S. embassy to Jerusalem after promising to do so. It also includes many of the conservative policy changes and deregulatory reforms of the Trump administration.

So why wouldn’t Trump just defy the conventional wisdom about government shutdowns — that they are politically suicidal — and just take full responsibility for a shutdown over border security.

Would it work? That’s another question altogether. But would Trump try it? Well, what’s to stop him? Trump has repeatedly kept the Democrats (and other Republicans) off-balance by defying expectations and doing what no one before him would. If he really does take things all the way with a shutdown, he could test everything people think they know about government shutdowns.

Democrats will soon take over the House, but their majority will not be a large one. Republicans will have either 199 or 200 seats, leaving them just 18 or 19 short of a majority.

This week, we look at five more districts — after five others last week — that Republicans will be looking to flip in 2020 as they seek to take back the House. This week’s seats are some of the ones that Democrats will find at least moderately difficult to defend, if not difficult.

Just one thing, though. As Curbelo pointed out, he outperformed DeSantis in his own district.

The fact is, it’s a tough seat for Republicans — a Cuban-dominated seat that has changed hands a few times since 2010.

Although the district isn’t the kind that will naturally improve for Republicans when Trump leads the ballot, it’s a very close and competitive district. Republicans may well be able to win it back if the 2020 environment is less politically toxic for the GOP.

Illinois-6: Although Republicans gave up early on Rep. Pete Roskam, R, he still managed to come within 8 points. That may not sound very impressive, but it’s better than it sounds in a strong Democratic year, in a state where Republicans had no reason to show up and vote. Note that Gov. Bruce Rauner, R, was a dead duck to begin with, having lost the confidence of most of the state’s Republican voters. Although Chicago’s suburbs have taken a pronounced tilt toward Democrats, this would not be the first seat of its kind in the area to flip back and forth.

South Carolina-1: Kate Arrington, R, defeated Rep. Mark Sanford for the Republican nomination, but in the process made too many Republican enemies and — even worse — put herself on the wrong side of an important local issue. That’s how she ended up losing the seat.

The fact is, Arrington ran a miserable campaign. She lagged her opponent badly in fundraising and appealed constantly to the national GOP for money to win a district that President Trump carried by 13 points in 2016.

A few things Arrington did probably didn’t help. Her pro-Trump message may have served her poorly in some suburban parts of the district. She also took a stand in favor of offshore drilling that rubbed many voters the wrong way.

The good news for Republicans is that this district is much more heavily pro-GOP than most of the other seats that flipped. It shouldn’t be a very easy one for the Democrats to hold, especially in a presidential year. Assuming they nominate a credible candidate, this should be one of the easier seats for Republicans to claw back in 2020.

Utah-4: Rep. Mia Love, R, lost Utah’s only competitive seat by a few hundred votes. Republicans will be sure to target this seat in a state that Republicans dominate from top to bottom. Although Rep.-elect Ben McAdams, D, is one of the strongest possible Democratic candidates in the Beehive State, no Democrat can have an easy time holding on to this seat if Republicans nominate a strong candidate.

Here’s the trouble, though. As with many of the other seats Republicans want to flip, there’s a big looming question: Is this district still within reach, or have its voters revolted against Trump Republicanism to the point that the district is becoming long-term irretrievably Democratic?

Virginia-7: In a strong Democratic year, Rep. Dave Brat, R, very narrowly lost what should be a solid GOP district. His loss came after a race in which he made a couple of damaging and unforced efforts. Leftists got to him by protesting his town halls.

Despite her win, and Virginia’s continued lean to the Left, Democrat Abigail Spanberger will not have an easy time holding on to this seat. Republicans are sure to compete for it in 2020. 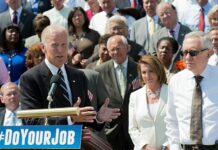 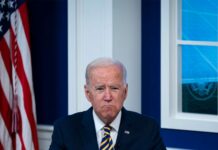