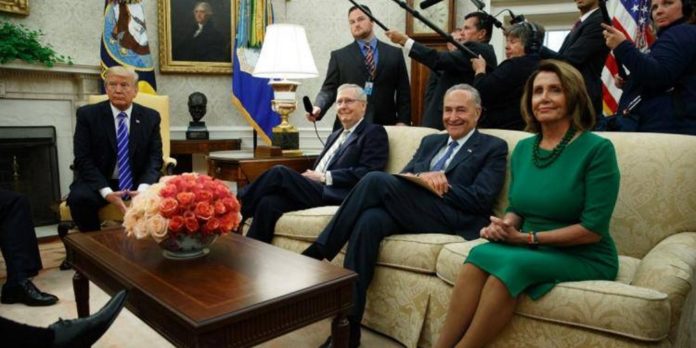 Once more on Obamacare? Senate Republicans are now aiming to take one last stab at Obamacare in the U.S. Senate — and they are working on an important time deadline. The current reconciliation bill still has not passed the Senate, and must do so by the end of fiscal 2017, which is September 30. The aim now is to pass the Graham-Cassidy health care bill through reconciliation by that date, after which it could be backed through the House.

The bill is not as ambitious as earlier repeal efforts, but it has the backing of at least one and possibly two Republican senators who voted against the last repeal bill. The basic idea is to create block grants that would free the states up to create their own health care policies. They could keep Obamacare in place as is if they wanted, or find another way to run their state programs and marketplaces. Meanwhile, the employer and individual mandates would be eliminated, although certain subsidies for insurers would be preserved at least temporarily.

Some conservative groups have embraced this as a last-ditch effort to do something, save face, and come away with a badly needed win.

Senate Majority Leader Mitch McConnell has made clear that he is willing to put this at the top of the list, provided that there are 50 votes for it. Expect to see more in the next two weeks. The vote, if it occurs, will be next week, the last week of September, just getting the bill under the wire.

Slightly aiding the push: The CBO’s admission that once again there will be double-digit premium increases next year, to the tune this time of 15 percent.

Deal or no deal? Nancy Pelosi and Chuck Schumer claimed last week that President Trump had offered them a deal: They would all accept a legislative version of DACA — the program legalizing childhood arrivals — without any funding for Trump’s Mexico border wall. It seemed to many of Trump’s supporters like he had gone soft. He had negotiated away his most important priority and was about to waste DACA, his best bargaining chip on immigration policy.

Some have suggested, by way of explanation, that there’s much less to this “deal” than meets the eye. At least one of Trump’s most dogged defenders believed the reports of a deal, but incredibly blamed it all on Republicans’ failure to cooperate with Trump, which supposedly forced him to do it.

But let’s just say there is a deal — because there is likely to be some kind of deal soon in any event. It’s worth thinking in advance about just how far Trump can go before he starts losing support with his actual voting base.

Trump’s appeal is based mostly on his personality, and not necessarily on ideas alone. This is evidenced by his willingness, throughout the 2016 election, to take multiple sides of many issues. What’s more, Trump hinted during the election both that the Mexican border wall might not be a true wall (at least not all along the border) and that he was interested in coming up with a deal to legalize childhood arrivals. Trump also took multiple sides on issues such as trade, abortion, and the government role in healthcare.

Neither this nor any of his other ideological inconsistencies and departures from conservative orthodoxy really hurt Trump with his base at any point during the election.

And for all the same reasons, there’s no basis for believing that it will hurt him now. Trump’s base continues to love him, even as his overall popularity remains in dangerous negative territory. His supporters will be satisfied to revel in the absurdities of Hillary Clinton’s new book and its claims about why she lost in 2016, rather than to focus on obscure debates about what exactly constitutes “amnesty.”

The 2016 election was a true eye-opener for many mainstream conservatives because it changed their ideas about what most conservative voters care about. It turned out that they care less about ideas and more about personalities than a lot of people thought.

By the same token, the new set of conservative-leaning media and activists that defend the new Trump-establishment may be surprised to discover that the average Trump enthusiast really wants to see Trump humiliate Democrats, and is far less interested in what constitutes an “amnesty” or other fine points of immigration policy.

Of course, in the end, Trump needs a majority in Congress for any such deal. Republicans can prevent anything he negotiates with Democrats, if they want to.

Oklahoma: Once again, the Democratic advantage in enthusiasm and turnout makes itself felt. The Oklahoma legislature is nowhere near flipping or anything of the sort, but last Tuesday, a Democrat managed to pick up an open Republican state House seat in Oklahoma by a rather shocking 21-point margin. The incumbent had simply quit to take a job with a non-profit. The same candidate who had lost to him in 2016 defeated the GOP nominee in this special election race.

As we’ve argues previously, this is a problem that Republicans underestimate at their own peril. Yes, of course, they hung on to all the congressional seats that were up for grabs this year. But there will be a lot more at stake next November, and all at once, both at the federal and state level. They will have to improve their turnout figures across the map without the sort of ludicrous campaign spending that a one-at-a-time special election can sometimes allow.

Michigan: President Trump has taken sides early in Michigan’s gubernatorial primary, endorsing state Attorney General Bill Schuette over Lieutenant Gov. Brian Calley. The apparent reason is that Calley severely criticized Trump during the presidential race — in particular, he called on Trump to drop out of the race after his infamous Access Hollywood tape was released in October 2016.

Considering that Michigan is an actual Trump state, his endorsement in a GOP primary surely carries some value, and Calley surely has a lot to lose being on the wrong end of Trump’s endorsement. Republicans will be seeking to hang on to this open position after the term-limited Republican Gov. Rick Snyder leaves office.

Michigan-11: Last week, we mentioned how Republican House retirements were pointing to trouble for the GOP House majority. Then Rep. Dave Trott, R-Mich., announced his retirement after just two terms in a suburban Detroit district. This seat, historically Republican, is not impossible for Democrats to win, and gave only 49.7 percent of its vote to President Trump last November.

It is worth noting that most members of Congress try to serve at least three terms, because their health benefits don’t kick in until five years of service. Does Trott see trouble on the horizon? Do the various other Republicans in vul