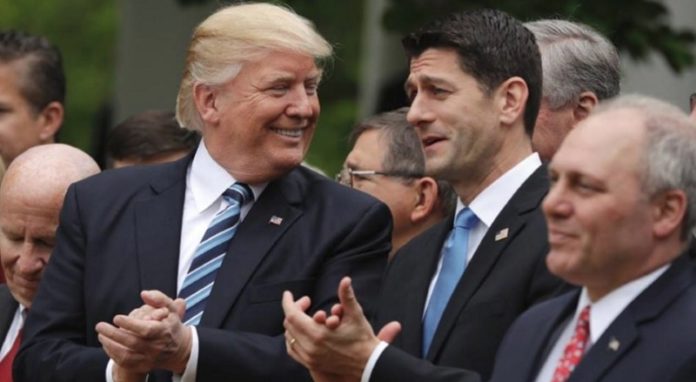 Health Care: The Republicans did it. And after all the negative press they got the first time for not doing it, you’d think they’d be getting a bit more positive ink now. No such luck, though.

The Trump administration racked up a big and much-needed legislative win with the passage of the House Obamacare repeal/replace/repair bill. The House compromise, which included a surprising but critical buy-in from the famously picky Freedom Caucus, flipped the script on the earlier failure to pass a bill.

That fiasco had been viewed as a Republican disaster, and a sign that the party cannot govern, as well as a black mark on the Trump administration’s competence in working with congress. Last week’s victory should have marked a clear rollback of that narrative. And perhaps in the public mind it has — but you’d hardly know it from the shrieks and dire warnings that this Republicans will surely lose control of Congress as a result.

To be fair, such a thing can never be ruled out. People are famously risk-averse, unwilling to give up what they have for fear that the replacement will be worse. The reaction to Obamacare’s abolition could thus, and for the same reasons, end up being just as ferocious as the 2010 wave that emerged in response to its passage.

But for now, that theory is not strongly supported by any of the polling that’s out there. Republicans still appear to be surprisingly strong on various generic ballot surveys, given the current circumstances. The RealClearPolitics average, giving Democrats a mere five-point advantage, would be good enough in most years for the GOP to gain seats, given that measurement’s historic skew toward Democrats.

Despite the astroturfed townhalls, flooded by left-wing activists, the current political environment is probably not much like that of late 2009, when the first version of Obamacare passed.

The hysterical reaction to the American Health Care Act’s passage has been telling. Democrats and their media allies have gone live and even viral with claims that are not just hyperbolic, but clearly false —  that people with pre-existing conditions will simply be dropped from the rolls; or worse, that being a rape victim would be considered a pre-existing condition under this bill.

This is all nonsense — more hyperbole being mouthed by the same people who insincerely promised health care nirvana under Obamacare. Conservatives are generally unhappy with the content of this bill mostly because it seems to fix an Obamacare-like system without really abolishing it. The reality, though, is that we just don’t enough information to know much at all about what the repeal bill will do. As with Obamacare, far too much is left to the regulators to be sure.

The text of the bill itself says nothing at all about what constitutes a “pre-existing condition.” Moreover, discrimination against rape victims (as if that were a medical condition) is illegal in nearly all states, and isn’t practiced even in the six states where there isn’t a law prohibiting it.

There are a few hundred thousand Americans who would be “uninsurable” without Obamacare’s protection for pre-existing conditions, or one like it. And as it turns out, this bill has something like it, guaranteeing them access to health insurance, but the precise mechanism is different and will likely vary by state. It isn’t necessarily clear whether the potential mechanisms will be a better or a worse deal for most customers with pre-existing conditions, or whether it will depend on their income level, or whether they will even notice a difference.

A lot depends on how the various states handle the establishment of subsidized and/or “invisible” high-risk pools, the latter of which Maine used with great success to bring its then-out-of-control insurance premiums down in 2011, before Obamacare took effect.

To be sure, some of the current beneficiaries of Obamacare would lose out — particularly lower-income households currently receiving large subsidies for Obamacare premiums. But at the same time, many of the middle class insurance customers who lost out when Obamacare passed (generally, families with an income close to $70,000) will be clearly better off, paying less and receiving a tax credit.

Even so, the Senate has promised to draft and pass something completely different, and in fact the White House is leaning on Republican senators to make dramatic changes. There’s also no guarantee that anything whatsoever will ultimately pass both houses of Congress

But even beyond that, even if the exact House bill were to pass, an awful lot of its effect will depend on regulatory decisions that take place long after a bill passes. That could be taken as a shortcoming of the bill, but it should also create some doubts about the conclusory statements about its effects.

Georgia-6: Having dodged the bullet, Republicans aren’t quite out of the woods yet in suburban Atlanta. The polling available so far for the runoff election to be held next month shows it quite close, with a small lead for Republican Karen Handel that’s within the margin of error. That’s not a great sign, given that Democrat Jon Ossoff did clearly outperform his numbers in the public polling from the first round.

It’s a neck-and-neck race, and still the Democrats’ best chance to show that their obviously fired-up base can make a difference in big elections. Still, the Republican has the upper hand over Ossoff, whose failure to reach 50 percent in April after nearly $10 million in campaign and outside spending guaranteed the GOP a second shot at a seat that has voted heavily Republican until recently.

Ossoff had the benefit during the first round of the election of being able to advertise for weeks without anyone contesting him on air. He also had the benefit of a fractured GOP field that was spending as much time and effort (if not as much money) trashing one another as it was trying to rally around the Republican cause.

He isn’t enjoying either of those advantages this time. He is, however, running in a district whose zeal for Donald Trump is not exactly overwhelming (he carried the seat by less than two points in November), and whose educated, suburban population is clearly the next Democratic demographic target.

Montana-At Large: Mike Pence and Donald Trump, Jr. will both be involved in the effort to save this House special election, which Republicans are favored to win even in the current environment. The Democratic Party, responding to pressure to get involved has committed a total of $600,000 to the race, for which mail-in ballots already went out last week. Speaker Paul Ryan’s SuperPAC has spent $2 million.

If anything, GOP chances here are much better than the ones they face in Georgia. A recent nonpartisan poll gives Republican Greg Gianforte a 15-point lead and support above 50 percent. A Republican pollster pegged him over the weekend at eight points ahead after showing him 13 points ahead a week earlier. A Democratic poll taken by Harry Reid’s SuperPAC (huge grain of salt) gives Gianforte only a six-point lead (49 to 43 percent). Election Day is May 25.

Pennsylvania-10: Rep. Tom Marino, R, citing a family medical issue, has withdrawn his name from consideration as President Trump’s new drug czar — a move that no doubt comes with some encouragement from the House GOP leadership, which has surely had enough of special House elections this year already. When you can appoint anyone to an executive branch post, why appoint someone in the House and risk losing that potential deciding vote on something that needs to go through the House?

South Carolina-5: Republicans Tommy Pope and Ralph Norman advanced Tuesday to the May 16 primary runoff to replace OMB director Mick Mulvaney. GOP turnout in the primary was about twice as large as turnout in the Democratic primary — by no means determinative, but probably a good sign that GOP voters are engaged. The primary runoff is May 16, with the winner facing Democrat Archie Parnell on June 20. Trump carried the rural and suburban Charlotte district by 19 points, making this a far less attractive target for Democrats hoping their base is energized in the Trump era.