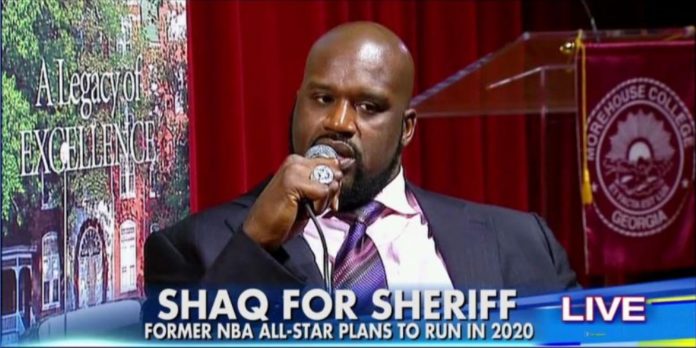 Former NBA player Shaquille O’Neal announced that he’s planning on running for sheriff in 2020. The 15-time NBA All-Star told an Atlanta TV Station that he has not decided where he will run, but that he is planning on doing so. O’Neal could make a run in Georgia or Florida, being a resident of both states.

WXIA reports, “When asked why he would run, Shaq had a quick and ready answer.

“This is not about politics. This is about bringing people closer together,” Shaq said. “You know, when I was coming up, people love and respected the police, the deputies. And, I want to be the one to bring that back, especially in the community I serve.”

Shaq says he’s perfect for the job, because he can relate to everyone. “I can put on a suit and have a conversation with Bill Gates. I can go in the hood and talk to the homies, and talk to the children.”