Say whatever you want about Donald Trump, you have to give him credit for knowing how to manufacture massive amounts of free media.

The entertaining showman has racked up more than $50 million in “earned media” in the few short months since he announced his campaign for president, according to an analysis conducted by Conservative Intel.

The bulk of that earned media comes from the near-constant coverage of Trump on the major cable news channels. In addition, Trump has earned millions in free marketing using his Twitter and Facebook accounts.

Of course, not all of the coverage of Trump has been positive. But even negative coverage so far Trump has managed to convert into positive poll numbers.

How much is Donald Trump’s earned media worth to his campaign? Can we put a dollar amount on it? If Trump’s airtime on Fox News is “free advertising,” how much would that time have cost him? According to ad buyers, a 30-second primetime ad runs between $30,000 and $45,000.

Media Matters, obsessed as they are with Fox News, have been keeping tabs on how much airtime Donald Trump has gotten since he entered the race in June. According to their report, it is about 10 hours, 20 minutes. This comes out to around 1240 30-second primetime ads. It would have cost the Trump campaign between $37 million and $55 million.

Similar numbers were not available for actual airtime on CNN or MSNBC, but Trump has raked in massive amounts of “free advertising” from those networks as well, according to the GDELT Project, which created a ‘2016 Campaign Television Tracker’ to keep tabs of the number of mentions have been made of presidential candidates on cable news since the beginning of 2015. 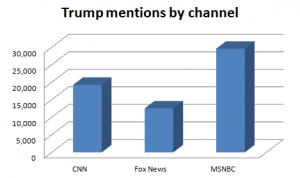 CNN’s coverage of Donald Trump has been so wall-to-wall complete that network president Jeff Zucker has heard complaints from his own newsroom.

And it is not just the Republican Primary that Trump is utterly dominating. He is also dominating the general election coverage. Despite being considered a candidate for less than half the year, Trump has nearly caught Hillary Clinton for most mentions: he has 74,000 and she is at 80,000.

Trump has also been mentioned about as often as all other candidates combined since his entry into the race.

While it is difficult to determine exactly how much cable news network mentions are worth, one thing that is clear is that this value combined with Trump’s airtime is worth far more than $37 to $55 million.

Social media is another area where candidates can both pay for advertising and benefit from other people talking about them and seeing them. Political campaigns in recent years have directed a lot of time, energy and money into building social media outreach campaigns. Trump apparently has not.

Still his Twitter performance has been unparalleled by his opponents. He was mentioned 1.5 million times in August alone. Since his entry into the race, he has gained over 1 million new followers – from just under 3 million at the end of May to about 4.1 million today.

The cost of Twitter advertising is difficult to calculate – it depends greatly on what you’re trying to do and how you do it – however the cost per engagement of a general sort tends to range between $0.50 and $2.00. Follows cost more on average than, say, retweets, at $2.50 to $4.00.

Using those numbers as an estimate, Trump has received at least $2.5 million in new followers and $2.25 million in engagements since early June. As Trump’s Facebook likes have gone up about 1.9 million – from the 1.7 million he was at in mid-June to his current 3.6 million – his Facebook presence would also be costly to match through paid advertising.

Between his Fox News airtime and his Twitter performance alone, Donald Trump’s earned media could easily be over $50 million. Taking into account his performance on Facebook, time on CNN and mentions by all cable news networks, it can be projected much higher.

This makes a HUGE difference, as Trump might say, as his is one of the least spending campaigns in the election.