Many in the Washington beltway would like to downgrade Rand Paul’s presidential chances – and not without motive. He’s an outsider unlikely to bend to the wishes of DC or lobbying interests and he wants to seriously shrink government, i.e. his election would do the most to eliminate many of the jobs in – and those where people work to influence – the federal government.

The mainstream media has certainly done their best to push the narrative that Paul’s candidacy isn’t going anywhere. Politico suggested, in a thinly- and anonymously-sourced piece, that his campaign is in a “downward spiral.” In Mother Jones, Kevin Drum suggested that because Rand is not as libertarian as his father Ron, he has “waffled” in his beliefs and isn’t drawing the same passionate following.

In reality, however, Rand had a great week and has several reasons to be optimistic.  I’ll cover five here.

First, contrary to what people like 538’s Harry Enten has written, Rand has been gaining in the polls, particularly in the past week. As the results from a Reuters/Ipsos rolling poll show below (Rand’s numbers are in yellow), he has steadily climbed since July 23 – or about the same time the horrifying Planned Parenthood videos broke. 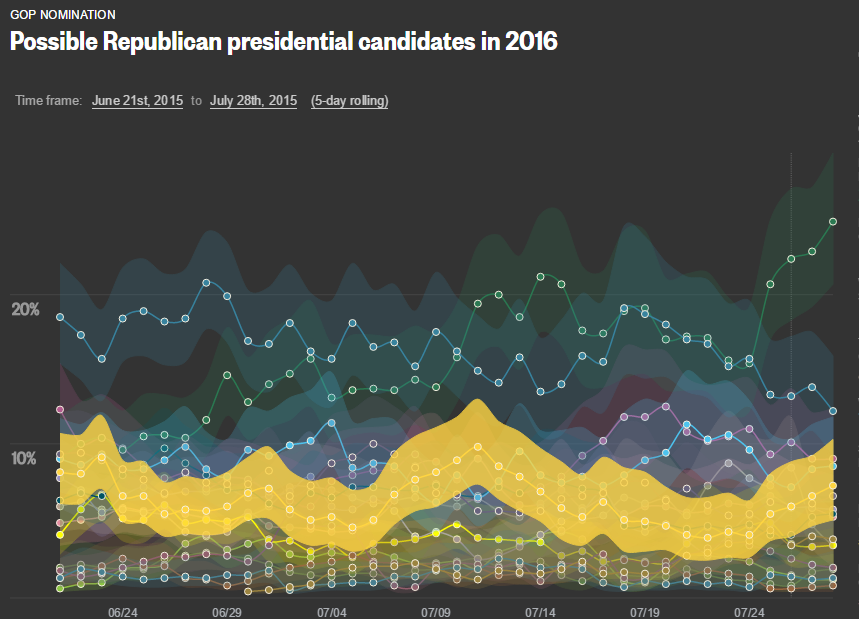 Aside from Rand, only Trump gained in the past week in the polls; all the other Republican candidates fell. (This happened despite the simultaneous drop of the leading Democrat alternative Hillary Clinton.) While the Trump-obsessed media’s headlines will focus on Donald’s gains, there are other forces at work here.

Unsurprisingly the American people like action, not just words, and are relieved to see someone taking the stand on this organization that they’ve been calling for. Rand, of course, reacted strongly to the Planned Parenthood revelations, introducing an amendment to defund Planned Parenthood of federal dollars and then working to get it around the Republican leadership that didn’t consider it a priority.

Two more reasons not to discount Paul can be found in Matthew Boyle’s fantastic in-depth report on his presidential campaign machine.

In the first place, as Boyle writes, “Everyone in Paul’s inner circle – an eclectic collection of talent from across the political spectrum – has at least one thing going for them: they’re winners.”

They have engineered or helped with the victories of everyone from Republican governors in Midwestern blue and purple states, such as Illinois’ Bruce Rauner and Michigan’s Rick Snyder to south and southwest governors such as Texas’ Rick Perry and Florida’s Rick Scott.

It is a diverse group with a deep understanding of what it takes to win all over the country. And that’s important for the second point to glean from Boyle’s report: Rand is in for the long haul.

Perhaps it is a cliché but the cliché in this case turns out to be true – presidential campaigns are marathons, not sprints. Numerous attempts at the nomination have been constructed around the strategy of winning one or two early states and hope that it generates a large cash flow. In other words, one or two primary elections are make or break – a couple months into 2016 and it’s time to go home, all of the time and effort put into the run notwithstanding.

Boyle, of course, reminds readers of the 2012 Republican candidates who surged momentarily only to disappear just as fast. Michele Bachmann and Rick Perry are obvious examples.

In 2008 as well, Fred Thompson got everyone excited about his candidacy – until he actually got into the race, only really showing up in one of the last debates. Too little, too late.

John McCain was another story, going from frontrunner status, to being written off by virtually everyone, to becoming the eventual nominee. Slow and steady wins the race.

There is no reason to expect anything different this time around with candidates as diverse as Jeb Bush – who is losing his once strong support in New Hampshire – and Donald Trump – the man who quickly swept away Bush’s support.

In such a crowded field and with so much potential for see-sawing frontrunners, candidates will have to bide their time until less serious contenders drop out as a result of the internecine sniping that will go on throughout debate season and into next year. Paul, whose core support is solidified and not split with others in the race, is in the best position to do this – and he and his team know it.

Reason #4: the primary calendar has been condensed to move more caucuses up earlier in the process.  The Republican National Committee move to change their rules to condense the calendar and help establishment candidates actually had the opposite impact.

This just adds to the list of significant states with caucuses, such as Iowa and Nevada. Caucuses worked in Ron Paul’s in favor in 2012 and are likely to for Rand this time around. No wonder the RNC backed a (failed) move to change Nevada’s caucus into a primary, as Conservative Intel noted in an earlier story.

But maybe the most interesting reason that Paul’s chances cannot be sold short is that he checks off one of the most important criteria in right-of-center voters’ minds: he can beat Hillary Clinton.

A Rare piece from yesterday shows what those following the polls already know: in head-to-head matchups with Hillary, Rand consistently comes out a leader among the competition in terms of his likelihood to win.

Hillary has been dropping in the polls for the past few weeks, but taking a look at Real Clear Politics’ ‘Paul versus Clinton’ average, it is clear that no one is gaining ground faster than Paul and no one other than Bush comes within the margin of error of beating her in more than one.

Clinton’s decline in the polls demonstrates serious dissatisfaction with her among Democrats. Some of the donors she was counting have turned to Bush, as Conservative Intel reported earlier this week, but more money in the predictably well-funded Bush machine – and Democrat money at that – is not so much noteworthy for his chances as it is for the fate of the Clinton machine, and it is certainly not going to endear him to the conservative base who already see him as too similar to Hillary.

Rand, on the other hand, is bringing in a lot of cash from grassroots donors, i.e. the people who go door-to-door and show up to vote. Again, this is the attraction of a Paul candidacy: he appeals to regular people – and a wide range of them.

Paul works from solid base in his effort to bring his message to people who may never have heard his brand of politics before. That takes time and the debates will certainly help, but if there is anything this election has taught so far, it is that there is widespread discontent with the Washington establishment all over the spectrum.

A candidate of strong principles and convictions has the unique opportunity to keep such a coalition together.