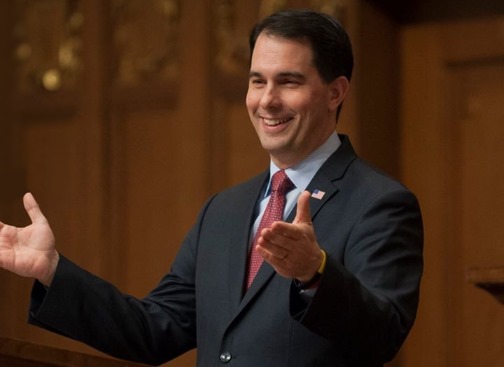 Wisconsin Gov. Scott Walker’s electoral record is arguably the most impressive among the growing list of potential Republican nominees. With three victories in the last six years against one of the most organized and well-funded Democrat machines in a generation, his blue-state credentials are unmatched. The question concerning his presidential aspirations, however, concerns his personal appeal.

But at a major Republican gathering in Iowa this weekend, Walker’s performance pushed back against the doubt over whether he has that necessary charisma to pull off a dark-horse bid for the GOP nomination, as Cameron Joseph reports for The Hill.

Playing to the crowd with a nearly-hoarse voice, Walker declared:

“There’s a reason we take a day off to celebrate the 4th of July and not the 15th of April. Because in America we value our independence from the government, not our dependence on it.”

Walker reminded the crowd of his victory as a Milwaukee County official in an area that voted for Obama by a 2-1 margin. “If you get the job done the voters will actually stand up with you,” he challenged.