After the August bombshell with a surprise Friday announcement by a grand jury that Texas Gov. Rick Perry was being indicted on abuse of power charges, the question was whether his prospects for a 2016 White House bid were over.

But coming out of the corner swinging, Perry and company pushed back with charges of political corruption and that he was a victim of a justice system gone awry, and it seems to have worked.

According to a new Texas Lyceum poll, Perry’s job approval ratings haven’t taken a hit at all since the news went national over a month ago.

Remaining steady at 57%, the numbers reflect the consistent approval Perry has enjoyed long before the 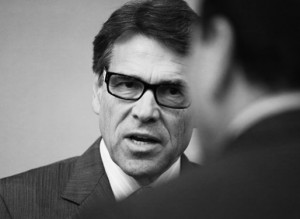 indictment came down. And what is clear is that his brand continues to grow in popularity as his tough stand against the convicted DA in the incident showed Perry as a man of principle in the eyes of voters.

Add that to his consistent media forays on all things international, whether on the immigration conundrum or the so-called ‘ISIS crisis’, and we have the makings of an early potential frontrunner in the hunt for the 2016 GOP presidential nomination.

All eyes are focused on November 5th, which will be the unofficial beginning of the 2016 election cycle—that is assuming control of the U.S. Senate is decided by then.