As if the race to retain her Louisiana seat in the U.S. Senate were not already under the gun, Democrat Sen. Mary Landrieu has made another misstep in a long list of tactics that have only added to the ammunition in the gun of her surging Republican opponent Rep. Bill Cassidy.

In her latest campaign ad, Landrieu attacks Cassidy as being weak on border security and portrays herself as pro-border fence and pro-border control.

With voter sentiments high in favor of securing the border and increasingly not high on any form of amnesty, this tactics might have been considered a smart move.

But the number one rule in campaign politics is never make a charge to which cannot anticipate the reply, and specifically don’t make a charge that opens up question about your own record. Alas, that’s precisely what Landrieu has done.

The Cassidy campaign quickly pounced on the opportunity to point out in a speech last year on the Senate floor, Landrieu wasn’t so hot on border security. In the speech Landrieu said,

“I voted for the dumb fence once. I’m not going to do it again because I learned my mistake when I went down there to look at it and realized that we could build two dumb fences or three dumb fences, and it’s not working. So I am simply not going to waste the money to do something that I know will not work.”

Having fueled more criticism of her growing reputation as out-of-touch, Landrieu must surely be mulling whether to pull the ad altogether in hopes that the damage to her failing campaign can be minimized. But with 56 days until the November 4th election, it may be too late. Recent polls have her trailing Cassidy in the possible runoff election in December. 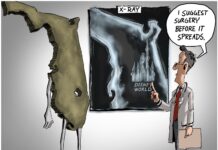