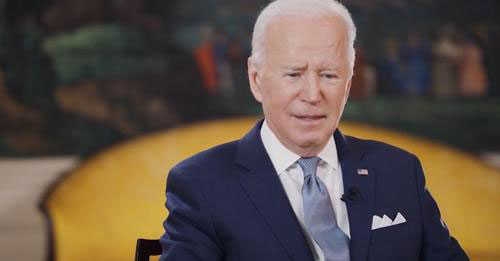 Is America delusional, or is Biden? President Joe Biden is now telling friendly U.S. audiences — in this case a left-wing YoutTuber — that in fact, all of his shortcomings are strengths that they are too stupid, deluded, or depressed to recognize.

Americans’ perception that the economy is poor, that he is incompetent, and that the nation is headed in the wrong direction — perceptions shared by vast majorities of Americans, according to every poll — simply reflect a failure by everyone else to appreciate his accomplishments:

“I think the biggest impact on the psychology of the country has been COVID,” Biden said. “Almost a million Americans have died of COVID. And so, I think it’s hard for people to get their arms around the fact that we have the fastest growing economy in 40 years. Wages are actually up, not down. Unemployment’s the lowest it’s been under — you know, it’s just incredibly low, and it’s around in the three-point range. We find ourselves in a situation where…there’s a phenomenal negative psychological impact that COVID has had on the public and its psyche. And so you have an awful lot of people who are, notwithstanding the fact that things have gotten so much better for them economically, that they are thinking, but, how do you get up in the morning feeling happy? Happy that everything’s alright, even though your job is better, even though you have more income? …It’s difficult, especially for people who get up in the morning and get up for breakfast and sit across from an empty chair.

This astounding claim about voters’ delusions rings so false that it will likely harm his public image even further, given that his job approval rating is currently 19 points underwater (57% disapproval, according to the latest ABC News Washington Post poll of registered voters). Currently, Republicans lead on the generic congressional ballot by 7 points, a margin much larger than Republicans typically enjoy even in a good year.

No, people are not upset because they lack perspective; they do not feel so depressed from losing loved ones in the pandemic that they can’t appreciate how good they have it under Joe Biden. They just think he’s an idiot who has done a poor job, and there are several individual data points (starting with Afghanistan) that have led them to this realization.

Also, many of the things Biden said about employment are simply untrue. The unemployment rate is not the “lowest it has been,” nor is the employment count even as high as it was before COVID. More Americans were working in February 2020 than are working today. Biden is very prone to say things that aren’t true, and most voters have baked this into his presidency.

Also, even if it is a fallacy that the majority is always correct, one cannot delude voters about the quality of the economy over the long run. If the economy is good, this tends to be reflected in their perceptions and in the polling numbers. Even if they still hate the president (and they often hated Trump in good economic times), they will tell pollsters that the nation is headed in the right direction. Currently, only one-quarter to one-third of respondents in any given poll believe the nation is headed in the right direction. The polling on this question is quite instructive. The “right direction” number spiked when Biden was inaugurated to levels unseen in over a decade. It has since fallen far below the levels of the Trump years pre-pandemic. The only voter delusion appears to be the one suffered during Biden’s honeymoon period. It ended abrupt after his botched Afghanistan withdrawal.

Gaslighting: A famous aphorism holds that you cannot tell voters how they feel. Or in this case, you cannot tell them they are doing great — that they never had it better — when they feel the bite of inflation in their everyday lives.

This tack by Biden actually resembles a psychological abuse tactic — something popularly known in modern times as “gaslighting.” One strives, through the power of sheer assertiveness and perhaps even rage, to convince the abused person in a relationship that his or her experience of reality is fake and to intimidate him or her into accepting an alternative reality.

On a national level, it’s entirely possible that Vladimir Putin and similar dictators can use such tactics to convince their own populations. But given the healthy amount of political disagreement that goes on in the U.S., this tactic seems far more likely to anger voters in an election year than it is to convince anyone. Americans like to hear their politicians admit error but soldier on. Barack Obama, for example, understood the need to make some concessions when he became very unpopular in 2010. Biden, whose popularity is currently worse than Obama’s ever was, seems eager to be judged more harshly than his old boss.

Biden bubble: Following the failure of Biden’s deterrence tactics, Ukraine is, for the moment, holding out against a completely unprovoked Russian invasion. The smaller nation is dramatically overperforming expectations and also winning the PR war. It is making the larger power look somewhat overrated. This early success has apparently convinced both Biden and Europe to provide support that they should have provided months ago.

The only thing ridiculous about this very serious situation is the way Biden is hoping to exploit the situation to his political benefit. Certain Putin-loving Republicans seem eager to give him a hand, but it is highly unlikely to work.

For context, Biden spent months refusing to arm the Ukrainians with adequate weapons until he was shamed into it by Poland and the Baltic Republics. It was a humiliating but effective power play by the weaker NATO allies — and very good, in the long run, for U.S. interests that both Biden and Germany were, until the last minute, unwilling to defend.

Biden energy policy: Biden’s White House has, since the invasion of Ukraine, asserted in press conferences that the U.S. can somehow thwart Russian energy dominance by adopting renewable energy, not by producing more energy. This assertion is nonsense — a message whose credibility is so weak as to cause political problems.

Those actually involved in turning Europe against Russia –including Germany, which is only now waking up to the problem of an aggressive Russia — are talking about opening up new liquid natural gas terminals. This actually creates new opportunities for American producers to produce more fossil fuels — the sensible solution to the energy part of this equation.

If Biden wants to stop Russia, he needs to encourage American producers to create more fossil fuels. All other means of replacing Russian energy in Europe are laughable and illusory.

Biden is afraid. The far left of his party opposes fossil fuel production. On the other hand, American wealth and the world’s geopolitical situation both scream out for more American fossil fuels to be produced and exported.

In order to exploit Ukraine’s surprising success against Russia’s aggressive warmongering, Biden needs to make sure that fuels and weapons are there for the Ukrainians and for the Europeans whose attitudes could turn against them if Russia cuts off the gas.

But this would mean that Biden needs to do what’s right and turn his back on the Green movement — a political movement in the West that Putin has long funded in order to keep prices up for his own natural gas sales. If Biden keeps bowing to the Green mafia, he will continue to be viewed as a Putin-enabler long after the current conflict is over.

Texas: This week’s primary should see Gov. Greg Abbott easily win renomination for a third term. Democrats are expected to nominate former congressman and gun-grabbing enthusiast Beto O’Rourke. It is worth watching carefully how many South Texans vote for O’Rourke in the primary, because this could be the year Republicans make a giant breakthrough with Hispanic voters in November.

Oklahoma: The just-announced resignation of 87-year-old Sen. James Inhofe has, so far, drawn Rep. Markwayne Mullin and Inhofe staffer Luke Holland (who has Inhofe’s endorsement) into the race to succeed him.

Gov. Kevin Stitt has ruled out a run for the seat.

Lt. Gov. Matt Pinnell could get in. So could conservative former Oklahoma House Speaker T.W. Shannon, who became something of a television news celebrity in retirement after running for and failing to win the state’s other Senate seat in a 2014 special election.