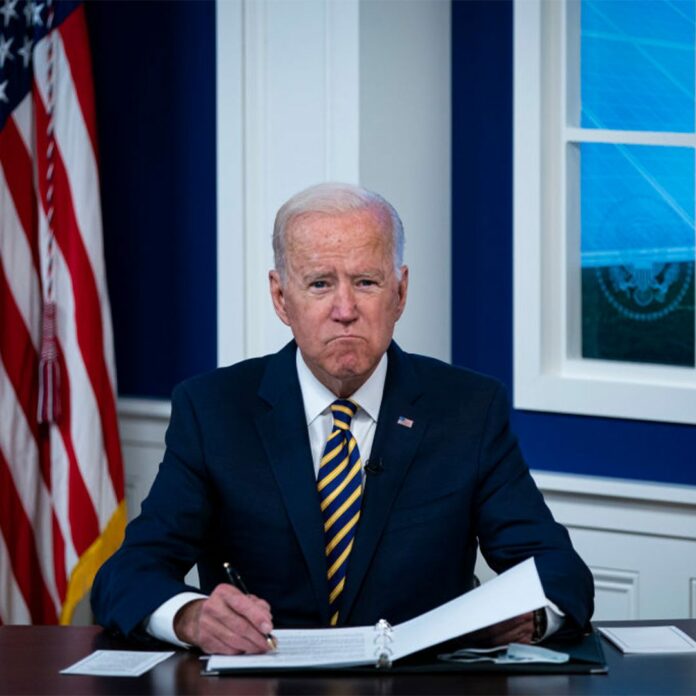 Lay of the land: With his popularity dwindling, Joe Biden’s legislative agenda is starting to look more and more like a longshot.

House leftists are currently sitting on the bipartisan infrastructure package, demanding that the Senate first pass the $3.5 trillion reconciliation-slash-social-change bills that the budget outline provides for. But Biden’s political problems make it a lot harder for Senate moderates to support such a massive expenditure, which will be used against many of the most vulnerable Democrats in both houses next fall.

Biden-era Democrats are about to face a similar and similarly effective pummeling. And there’s no reason if you are, say, Sen. Mark Kelly (D-Ariz.) to attach yourself openly to the anchor of Biden’s agenda if it seems likely that one or two senators will turn tail, killing it.

The potential effect of all this could be to prevent Biden from getting his agenda through a Congress that could be in Republican hands before he has a chance to accomplish anything lasting. That may help the Biden-era economy in the long run — inflation and massive deficit spending don’t usually go well together — but failure is never a good look in the political short run. It didn’t look good for President Trump when he failed to pass any sort of Obamacare repeal, and likewise this won’t look good for Biden.

In short, this sets up a potential cascade of failures — the administration’s early failures (such as Afghanistan, the border, inflation, COVID) set Biden up for legislative failure, which in turn sets him up for political and electoral failure.

The administration, for its part, seems to know that a lot hangs on the legislation, and that things aren’t going well. Biden’s social media handlers have now gone from his earlier claim that his overarching economic Build Back Better plan is “already paid for” to claiming that it’s “free.” The two are obviously inconsistent, and really neither of them is true, but the latter is kind of an insult to everyone’s intelligence. The sudden shift indicates some level of chaos and panic among his staff.

Poisoned ponds: As the above indicates, Democrats’ big problems go way beyond their current legislative agenda. They also face being turned out of office due to Biden’s growing unpopularity. The ponds in which they are fishing for 2022 votes are being poisoned by Biden’s administration right now.

According to the rolling online surveys conducted this year by Civiqs, Biden’s approval ratings keep finding new depths in a bevy of states, including several with important elections coming up this year and next year. Although these are not traditional polls, they indicate an ominous and ongoing trend against Biden, perhaps portending a 2022 catastrophe for his party.

For example, with the governor’s race only weeks away, Biden’s rating in Virginia has sunk to 41 percent approval, with 51 percent disapproving.

In New Jersey, Democratic Gov. Phil Murphy is expected to be a slam dunk for re-election. But even he cannot be pleased to have Biden’s approval/disapproval narrowing to just 47 to 44 percent. Remember, this is a very Democratic state.

In Arizona, where Democrats are also defending an incumbent senator, Civiqs has Biden’s approval down to 39%, with 54% disapproving.

In Georgia, where Democratic Sen. Raphael Warnock faces a tough re-elect, Biden is down to 36%, with 55% disapproving.

It doesn’t matter where you look — Biden is a liability for all Democrats running for office right now. If Republicans play their cards right, the potential for another 2010 or 2014 sweep is very real.

Virginia: A new poll by the University of Mary Washington is the first to show Republican Glenn Youngkin besting Terry McAuliffe for governor in Virginia. It has the Republican up by five points — 48 to 43 percent. This poll is currently an isolate, but with Biden’s ratings in free fall, it is not wholly implausible.

The first fact is that Iowa is no longer the swing state it once was. Voters there are moving rapidly toward the GOP. What began with Sen. Joni Ernst’s surprisingly big 2014 victory continued with Donald Trump’s blowout of Hillary Clinton in 2016 and his relatively easy nine-point win there in 2020. The Democratic wave year of 2018 was not enough to upend Republican Gov. Kim Reynolds or Republican control of the state legislature.

The Hawkeye State is known for competitive politics that come from the far ends of the political spectrum on either side. But Tom Harkin’s Iowa appears to have completely given way to Chuck Grassley’s or Terry Branstad’s Iowa.

The second fact is that if Biden is doing this badly in such a reputable poll in Iowa, how much worse are his numbers everywhere else? Which is to say there probably really is something to the Civiqs surveys cited above, even if they are not regular traditional poll results. (For the record, Civiqs has Biden at 33 percent approval in Iowa.)

Iowa is not Idaho, but these poll numbers really do look like it is. Pollsters elsewhere might just be missing how much anti-Biden sentiment there is nationally.

Currently, with Biden’s administration on the rocks, both Reynolds (who is up for re-election) and Grassley are looking pretty good for next fall. This poll has Grassley leading his most likely Democratic challenger, Abby Finkenauer, by 18 points, 55 to 37 percent.

One might be tempted to encourage the 88-year-old Grassley to retire, on the grounds that this would be a better year than most for Republicans to win an open-seat race. However, Grassley remains an icon in the state, and if he wants to run again it’s hard to say no. It’s just as easy to replace him with an appointment if he has to leave office for age- or health-related reasons later.