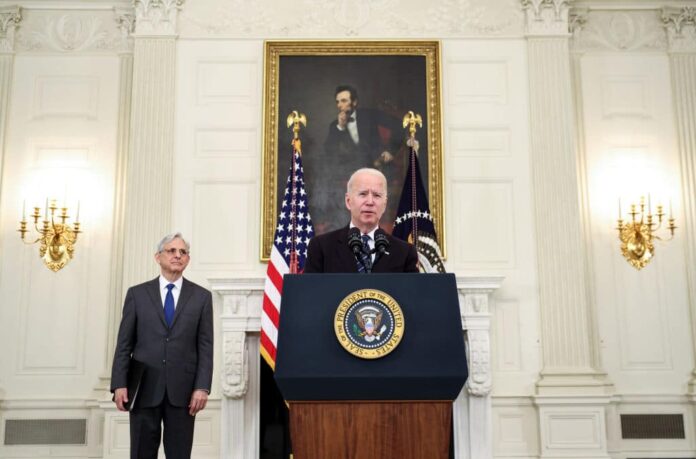 Crime vs. guns? Can Joe Biden and the Democrats defuse the ongoing national crime wave by turning it into a gun control issue?

Probably not. But that won’t stop them from trying.

There are a few telling and inconvenient facts about gun violence that give the lie to gun control as a solution.

First, Democrats’ myopic focus on certain, very specific types of rifles and rifle features (i.e., the so-called “assault weapons”) flies in the face of FBI data showing that rifles — all types of rifles — are used in only about 4% of gun homicides. A genuine focus on guns as a problem would be all about handguns, which account for the overwhelming majority of killings.

Finally, it is worth noting that the levels of gun violence in the various states has very little correlation with their gun policies. Depending on what year you look at, Texas and California are not that different in terms of guns being used against people, despite the fact that a lot more Texans own guns.

Crime, not guns: The old saying is really true — guns don’t kill people; people kill people. Mass shootings tend to occur in very specific scenarios, including when authorities ignore red flags (as in Parkland, Fla.). But mass shootings, despite being the inspiration for nearly all gun control proposals, have almost nothing to do with 99% of national murders. Most murders are related to common street crimes and committed with black-market handguns.

Another issue is that the guns were all there in 2017, but the crime problem only began later, when Democrats started defunding the police. Violent crime has skyrocketed in several cities as a result of this. The solution to the crime problem is not gun-control — it’s more aggressive policing. In 2022, Republicans really want to make this into a clear choice. You can either crack down with a stronger police presence and reduce crime in high-crime areas, or you can embrace politically correct nostrums, defund your police force, and watch homicides spike as you grasp at gun-control as an excuse for your own failures.

Democrats have a problem heading into the midterm. They have brought back urban decay. They have gone back to the very same soft-on-crime policies from decades ago that previously failed. People are starting to notice, and that makes it an election problem.

NYC election chaos: Weeks after voters cast their ballots, it is only now becoming apparent that former cop Eric Adams won the Democratic primary for mayor. This is the most damning testimony possible against ranked-choice voting. The process of sorting and ranking votes has taken forever and been full of errors. To add insult to injury, it has disenfranchised tens of thousands of voters (15 percent of all voters, in fact) who did not express any preference between Adams and Kathryn Garcia. This should provide a window into the weaknesses of ranked-choice voting generally.

California: Thanks to machinations by Gov. Gavin Newsom, D, and Democrats in the state legislature, the date for Newsom’s recall has been set for September 14, leaving only just over three months for the entire election to take place. This gives Newsom an advantage. His approval ratings have been rebounding from their COVID-era low-point, which had come about thanks to his arrogant refusal to follow his own ridiculously strict coronavirus lockdown rules. Newsom achieved this early date by changing the election rules in midstream so that the usual review of costs of the election can be waived.

Newsom is also trying in the courts to gain another important advantage that the law doesn’t provide for — to identify him as a Democrat on the recall ballot. The breakdown of the rule of law in this election is illustrative of how badly things can go in one-party states.

Texas: Gov. Greg Abbott, R, is taking very seriously a run against him by actor Matthew McConaughey, whose party affiliation is unclear. Early polling suggests that he is right to do so — he leads the “Dazed and Confused” and “True Detective” actor by one point, 39 to 38 percent, in a Dallas Morning News poll released a week ago.

Alaska: The state Republican Party is supporting Kelly Tshibaka’s conservative challenge against Sen. Lisa Murkowski, even as the NRSC continues to back the incumbent who voted against Justice Brett Kavanaugh.

Murkowski has called Tshibaka, a former commissioner of the Alaska Department of Administration, “somebody with a pulse.” But that might be all it will take to knock out the fortunate daughter who was appointed by former Gov. Frank Murkowski — someone with a pulse who is not a complete idiot.

Murkowski could well find herself at an even worse disadvantage than her previous primary loss to Joe Miller, thanks to Alaska’s new top-four jungle primary. As long as Tshibaka can avoid acting like a complete idiot like Miller, she should have a very good chance of defeating Murkowski.