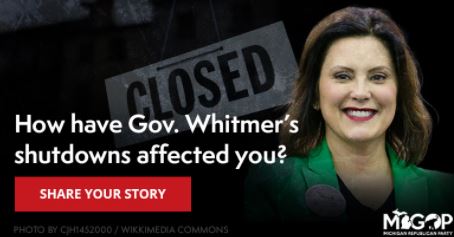 It’s now been over a year since the coronavirus shutdowns began, and the restrictions in Michigan have been among the most repressive in the nation.

Governor Whitmer’s shutdowns have crushed our economy and personally impacted millions of Michiganders, but she has refused to take responsibility.

Michigan Republican Party leadership has recently changed, and it appears the new team is finally holding Whitmer accountable for her actions.

They have launched a campaign called “Tell Your Story Michigan”, where Michiganders can record and submit a video to share how the restrictions and shutdowns have impacted them.

By visiting TellYourStoryMichigan.com, you can upload a video you’ve already recorded, or record a new video using a computer or mobile phone on the website.

“The effects of Whitmer’s shutdowns are going to be long lasting – business bankruptcies are still on the rise and restaurants are still being crushed by needless restrictions. Fighting back starts with spreading the word about how damaging and destructive these lockdowns are for Michigan’s economy and communities,” the Michigan Republican Party said in a statement.

It’s a brilliant concept. The jobs and businesses that have been lost are not just economic data and numbers to those who have been impacted. Michiganders finally have a platform to share their stories, and these stories will help us hold Whitmer accountable for her actions.

MIGOP is engaging in more than just this online effort. They were joined by GOP lawmakers who traveled to Comerica Park on Monday to call on Whitmer to increase capacity limits at Detroit Tigers baseball games.

It appears their efforts are paying off, because hours later the Tigers announced a comprehensive plan arranged over several months in coordination with Major League Baseball, state health officials, medical experts, and government leaders that will allow fans to confidently and safely return to the ballpark for the 2021 Detroit Tigers regular season.

The action MIGOP is taking on these important issues is a good sign for Republicans, and the work they are putting in early will help set the tone for the 2022 elections.