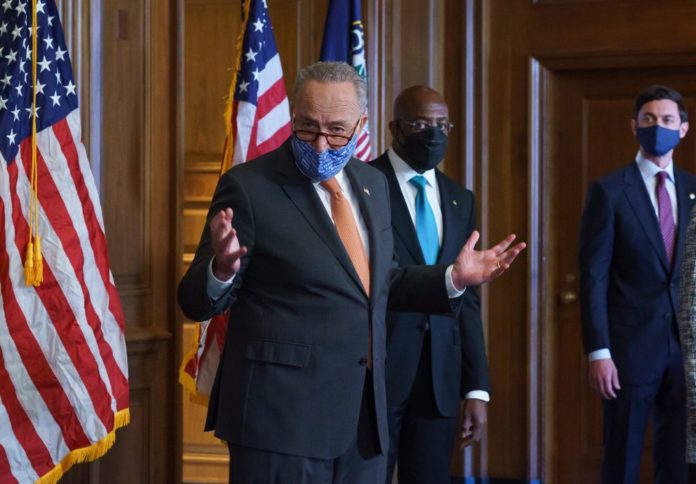 Democrats’ second impeachment of President Trump accuses him of being an insurrectionist who deserves to be blamed for the lethal Jan. 6 Capitol riot. There are plenty of problems with this accusation, as we noted last week. However, attention must now turn to the Senate trial that Majority Leader Chuck Schumer insists on holding, despite Trump’s exit from office. At stake will be not Trump’s removal (obviously) but his disqualification from holding future office.

This second impeachment is unprecedented. It also smacks of an obsession that could even endanger President Biden’s effectiveness in his early days in office.

Trump is gone, a majority of voters are satisfied with that outcome (even if they aren’t especially fond of Democrats), and it’s highly unlikely that he will ever run for office again. Yet he continues to live rent-free in congressional Democrats’ heads. In that sense — and it’s a very Trump-y sense indeed — one could say he is the most effective president in many decades.

If it turns out that Trump deliberately hindered a military response to the Capitol riots, or that he inappropriately pressured state and federal officials to violate their oaths of office, then it might be that an impeachment is merited. But this impeachment has not even attempted to establish any of those things. The House didn’t take the time to investigate anything — rather, the Speaker simply put an impeachment article on the floor and it passed, almost along party lines.

This procedure is unfortunate all on its own, because it creates an additional legislative precedent for political impeachments. But the underlying article is doubly unfortunate. The House is trying to criminalize politically dishonest rhetoric that almost everyone uses and should feel free to use, irrespective of how a few nuts might react to it.

It would be wrong — un-American, even — to tell Bernie Sanders that he has to stop talking about revolutionary change or claiming falsely that the entire American political system has been corrupted by malevolent millionaires and billionaires and multinational corporations. This should always be allowed, even though it was precisely this sort of rhetoric that probably led a gunman to try to assassinate the entire House Republican baseball team on June 14, 2017. It would be wrong, no matter how much one disagrees with it, to criminalize rhetoric about how America is irredeemably racist, yet this sort of rhetoric from American politicians almost certainly incites riots and violence of the sort we saw this summer.

So if Trump can be impeached for voicing political lies and urging followers to protest at the Capitol — even saying stupid things like “it will be wild” and claiming falsely that an election has been stolen, as many others have done — then what politician could ever meet this standard in the future? This particular formulation of an impeachment article is an affront to the First Amendment.

Democrats do have a plan here, but it may be a bit too clever. As with their first impeachment, they are trying to make it uncomfortable and even impossible for Republicans to defend Trump or anything about his administration without paying a political price. They believe that senators who vote against impeachment will be endangered.

They are probably wrong. When they tried this with his first impeachment, it backfired — they created enough sympathy for Trump that he almost certainly would have won re-election if not for COVID-19. They promised that they wouldn’t let anyone forget about Republicans’ votes against impeachment, yet they were so embarrassed about that impeachment by November that they barely mentioned it in their campaigns.

On the other hand, there will be some Republicans who support it, and there already were some in the House. There will surely be a reckoning between the Trump and anti-Trump wings of the GOP in some of these cases, such as a primary challenge to Rep. Liz Cheney and possibly other Republican House members who voted for the impeachment.

Arkansas: To no one’s surprise, former Trump spokeswoman Sarah Huckabee Sanders will be running for governor in Arkansas. This is a race where her service to President Trump will definitely be a plus, both in the primary and in the general election. General elections in Arkansas, by the way, have become one-party contests again, just as they were (albeit always Democrat-dominated) prior to 2010.

Between her association with Trump (who got 62% there in the election) and her father’s status as a pioneer of Republican dominance in the state, Huckabee Sanders will be very hard to stop.

New York Redistricting: If you want to understand just how serious Democrats are about gerrymandering and redistricting reform, just look at what they are doing right now in New York.

Previously, they had passed a nonpartisan redistricting reform plan when they thought it would help them seize control of the state Senate through redistricting. But in the time since, they have easily taken control of that body. In fact, they have won a supermajority. And that is what is now letting them hypocritically undo their own reforms.

They are now maneuvering in advance to change the rules of the commission and put their supermajority in a position to throw out whatever nonpartisan map it produces. Their measure will go before the voters in this year’s local elections, disguised as an obscure technical change that voters might well approve without thinking twice or understanding its full import.

The Democrats’ insincerity on this issue is remarkable, of course, but also beside the point. The point is that this is probably the Democrats’ only way of gaining new seats in 2022, just as it was in 2020.

Democrats are about to lose several House seats simply because of reapportionment. Illinois, Rhode Island, California, New York, and other poorly governed liberal states are going to lose seats to conservative states such as Utah, Tennessee, Montana, and Alabama. This puts a great burden upon New York’s legislature to create as many Democrat-friendly seats as possible, and that’s precisely what they intend to do.

Right now, New York’s congressional delegation has only eight Republicans (assuming Rep. Claudia Tenney, R, prevails in the 22nd district) and only nine or ten districts out of 27 in which Republicans have any chance of winning at all.

Sources in the state inform us that Democrats in New York’s legislature could conjure up as many as five additional Democratic-leaning districts if they put their minds to it and if they are willing to take some risks. The task becomes especially easy because the population of upstate New York has been hollowed out by Albany’s high taxes, poor handling of COVID, and environmental craziness. In short, at least one of the two districts New York is expected to lose could be Tenney’s, and its most liberal precincts (in Ithaca and Binghamton) can be divided up between other marginally Republican seats, giving national Democrats an instant net gain of three before they’ve even broken a sweat.

Democrats are likely to replicate this feat in Colorado and Virginia, but expect Republicans to strike back in Texas and Georgia (they still control the state legislature) especially, and to consolidate gains in Florida where possible. 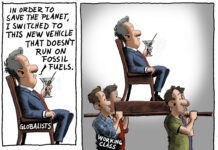