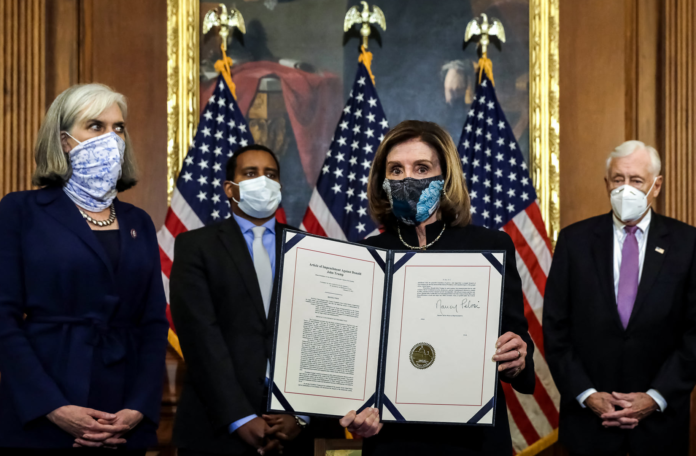 Democrats have impeached President Trump a second time, with the votes of 10 Republican House members. Although this impeachment process is less frivolous than the one they attempted to push through in early 2020, it is a rushed mess all the same.

The first Trump impeachment was a completely partisan affair involving what were never really illegal acts. There is no such federal crime (let alone a “high crime”) as “abuse of power,” for example. This time, incitement to insurrection is at least a real crime. But it is not self-evident that Trump committed it — some investigation and evidence is required, and no one seems interested in taking the time to do it. Considering that Trump will not be removed from office by a Senate trial, and that what’s at stake will be his ability to serve in offices in the future, there shouldn’t be any hurry to push him out now. The House and Senate should have waited and acted in a more considered manner. But the House rushed because the point of this second impeachment does not actually seem to be justice, but rather the conspicuous moral vindication of those eager to show that Trump is a bad guy.

Great Haste: A more serious impeachment investigation would have involved, for example, questions about whether Trump hindered the deployment of the National Guard during the attack on the U.S. Capitol. It would have looked more closely at precisely what Trump said and whether that encouraged violence, what he was doing during the raid, and any sins of omission in calming the rabble that might indicate a guilty conscience on his part. Instead, we get a hasty accusation, backed up by a general impression about Trump said or did. It must be noted, however, that encouraging protestors to go to the Capitol and raise Hell is not an unusual thing for politicians to tell perfectly peaceful protestors, whether they be March-for-Lifers or gun-control advocates.

As some House members noted during the impeachment debate, the insurrection had been planned on social media over the course of several weeks leading up to the Jan. 6 incident. This should be taken as evidence that the attack was premeditated, meaning that Trump’s off-the-cuff statements did not abruptly cause an outbreak of violence in the Capitol.

Any allegations that Trump was more extensively involved in causing the violence would therefore merit further investigation and an impeachment or criminal trial at some future date, not a hasty, conclusory impeachment vote before he leaves office, just to make a point.

On the other hand, it is fair to note that Trump has a history with incitement. During his 2016 campaign, for example, he promised to pay the legal bills of anyone who got in trouble for assaulting a heckler. It is not a frivolous question whether he ought to be punished by Congress.

However, that only means that an appropriate investigation should be conducted. And in Democrats’ rush to make a big show of punishing Trump before he leaves office, that isn’t happening. As with the first investigation, there is no consideration of the gravity of what the House has just done.

Inapt Rebel: Think what you will of Trump’s unwillingness to accept the Electoral College’s vote. That doesn’t in itself justify his exclusion from future office. This could be brought about with a simple majority vote in the U.S. Senate, as provided by a Civil War-era provision in the Constitution intended to exclude Southern Democrats from holding office after their participation in the Confederate rebellion.

The violence at the Capitol on Jan. 6 was obviously tragic, especially as it led to loss of life by policemen and others. But the idea that Trump participated in or caused an insurrection against the Union and should therefore have this provision applied to him seems a bit of an overstatement. The precedent being set here is unfortunate. It is likely that, in the future, partisan impeachments will be the norm, not the exception.

But at least Vice President Mike Pence avoided an even worse precedent. House Democrats had encouraged him to invoke the 25th Amendment and displace Trump in a palace coup on the false pretext that he was incapacitated and unable to perform presidential duties. This would have created an opening for ambitious future vice presidents to usurp their bosses. Again, this enticement from Democrats suggests such blind hatred of Trump that overall considerations of governance and constitutional order go out the window.

Iowa: In a state that has become more reliably Republican in the Trump era, one big question is whether the unlikely Internet star Sen. Chuck Grassley, R, will run again. Last year, he indicated that he would be delaying his decision for another year, and so the time to decide is coming quickly. Grassley, who turned 87 last fall, will be 89 by the time of the 2022 election. He would be seeking a six-year Senate term that will not end until he is 95 years old.

Pennsylvania: The rush to replace retiring Sen. Pat Toomey, R, is on, with Lieutenant Governor  John Fetterman, D, expressing interest earlier this month and quickly raising half a million dollars in three days. Several Republicans are also considering this race, which in Biden’s first midterm is likely to be one of the most competitive in the country.

Former United Nations Ambassador Nikki Haley, long rumored to be interested in the top job, has started a PAC — the Stand for America PAC — to help Republican House and Senate candidates. As with most presidential hopefuls, her organization will spend the midterm doing favors for important Republican officeholders, storing up treasure and building good will to gain key endorsements in the 2024 primary.

Expect to see many other Republicans take such measures, particularly given President-elect Biden’s advanced age and the likelihood that the 2024 election will be an open race.