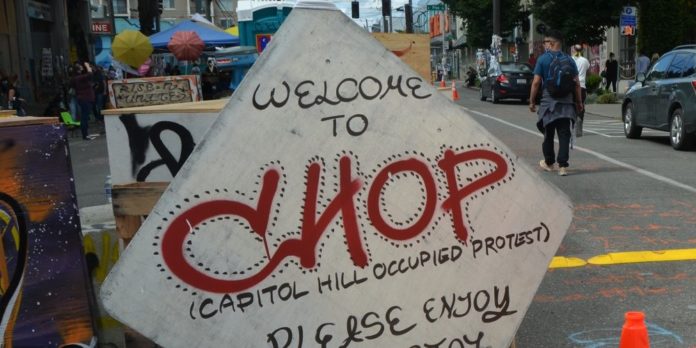 A happy Father’s Day to all our subscribers and their dads.

The Church of the Woke isn’t just out to pull down Confederate statues — or grave markers.

They’re actually out to destroy any remnant of history prior to about 2000.

The reasoning is as dumb and simplistic as the congregants themselves. People — especially white men — had less woke attitudes in the past than we do now. Therefore, all memory of those people must be obliterated.

If you see a statue of a white man, then it’s probably of someone who lived before 2000. Therefore, they must be a slavholder. Tear it down, for social justice’s sake.

And of course, if we have to tear down Lincoln, and others (like Matthias) far more committed to justice and freedom for slaves than any of these modern-day social-justice-wannabe protestors, then so be it. Who, they ask themselves, could possibly be more committed than we, who have never risked anything or had an independent thought that wasn’t inspired by the mob?

America is not evil: Let’s be real here. Even our greatest historical figures were not perfect men. If our Founding Fathers had been angels, to paraphrase James Madison, then our nation would not have needed a Constitution in the first place.

Many historical figures who did great and worthy things subscribed to moral ideas that today we reject. Their shortcomings don’t make them evil men or nullify the good things or which we memorialize them. (And even those who actively worked for evil causes don’t deserve to have their very graves desecrated.)

When it comes to slavery, there was a level of moral blindness in the United States prior to the Civil War — some of it willful blindness. It was based in part on profit and in part on peer pressure. Many people of that era lacked the courage to overcome the prevailing ideas. Some did — and of course today’s warriors of ignorance trash them along with the just.

But we don’t honor George Washington because he owned slaves. He went along with his peer group in that regard, failing to rise above the ideas of his era. But we do honor him for bravely challenging British authority, for honorably leading his men in war, for surrendering power to Congress after the revolution, and for serving as our first president.

We don’t honor Thomas Jefferson for owning slaves. We do honor him for writing the Declaration of Independence — risking death and proclaiming the equality of all men at a time when even equality for all white men was a revolutionary idea. To be sure, he should have known better, but he engraved the Founders’ commitment to “life, liberty, and the pursuit of happiness” into the national psyche with his historic declaration.

We don’t honor Winston Churchill for his casual racist attitudes toward natives. We honor him because his resolve in particular, and Britain’s refusal to stop fighting and make peace with the Nazis — foiled Hitler’s plans for Europe.

This is what’s so wrong with the current rash of iconoclasm. It is a case of profound ignorance masquerading as humane concern for fellow men.

Communities that want to stop honoring Confederates take the matter up through democratic processes. They have civilized conversations about it, and then they remove the statues if people agree.

Silent majority? The social justice mobs seem to represent a very loud minority of activists that thrives based on its ability to intimidate. They may or may not have public opinion on their side. To some degree, the mobs are succeeding in their intention of instilling fear, and that makes opinion hard to gauge. People are scared to talk or even to make the wrong gesture by accident, or to put up a social media post that could be read by the wrong person the wrong way.

In the long run, the only way to resist this trend is to defend the American founding and its ethos as a good thing, an expansion and advancement of the cause of human freedom. One need only reiterate what everyone seemed to agree on just a few short years ago — America’s worst historical flaws do not override or cancel out its unprecedented success in bringing people of all races together in numbers unheard of, to live in a harmony and prosperity that no other nation ever experienced.

In the meantime, however, the question for us is what sort of political reaction this gets. Is there a silent majority, horrified and ready to vote? Or is wokeness more popular than people thought? There is a chance that the intimidation, the accusations of racism, the non-stop media campaign to beat down President Trump, has made supporters fear to identify themselves to pollsters, creating a sort of Bradley Effect, by which his support in the polls is significantly understated.

So far, the polls look quite awful for Trump. He can’t necessarily count on a silent majority bailing him out, but there’s no one else to do it if he indeed does need bailing.

Kentucky: The Democratic establishment’s early backing for veteran and 2018 House candidate Amy McGrath to take on Senate Republican Leader Mitch McConnell has been punished again and again by their own candidate’s unsuitability. She has proven quite inept at forming a message that can sell both statewide in Kentucky and with the increasingly left-wing Democratic donor base.

Her repeated failure has massively raised the profile and hopes of state Rep. Charles Booker, a younger and more left-wing Democrat. (Given the current political zeitgeist, it doesn’t hurt either that he’s black.) Booker now enjoys the backing Secretary of State Allison Lunergan Grimes, the Louisville Courier-Journal, the Lexington Herald-Leader, Bernie Sanders, and Alexandria Ocasio-Cortez.

The final insult came last week when Sen. Elizabeth Warren, D-Mass., un-endorsed McGrath and threw her support behind Booker instead.

It is hard to imagine that Booker, with his meager fundraising total of less than $1 million as of the beginning of this month, could overcome McGrath and her $41 million haul. But keep imagining, because it appears to be a distinct possibility. He leads McGrath in one recent poll, pointing to a stunning finish and a badly missed chance for Democrats to give McConnell a tougher race.

And wow, in that case, wouldn’t Democratic donors like some of that McGrath money back to spend elsewhere?

Either candidate would start off trailing McConnell by a wide margin, but McGrath performs much worse, trailing by 20 points compared to Booker’s 15-point deficit. Likely Republican Retention.

Nebraska: Democratic nominee Chris Janicek sent “sexually inappropriate” text messages about a female staffer to other campaign staff. Now the state party is calling on him to drop out of the race and let someone else lose to Sen. Ben Sasse. Janicek, who ran and won the primary with 31 percent as a conservaDem, is refusing to drop out, and other Democrats are talking about running as write-in candidates. This is most likely a stop-gap effort to prevent Democratic turnout from plunging in an election year when the presidential outcome in one of Nebraska’s three congressional districts could be highly consequential.

New York-14: In 2018, Alexandria Ocasio-Cortez proved that crazy, unexpected things can happen in the primaries of one-party congressional districts when she came almost out of nowhere to defeat Joe Crowley, a member of the House Democratic leadership who seemed unaware that he faced a threat in the first place.

Now that she’s the incumbent, she faces her own primary challenge from former CNBC host Michelle Caruso-Cabrera. But lightning probably won’t strike twice. In the absence of polling, AOC is heavily favored to win, in spite of some locally controversial decisions (such as scaring Amazon away from her district) and her cultivation of a nationally focused persona.

New York-16: Longtime Rep. Eliot Engel, D, has called in every favor to stave off a left-wing primary challenge from Jamaal Bowman in his Democratic Bronx and Westchester County district. It probably won’t be enough.

Even Sen. Chuck Schumer got in on the act recently, publicly endorsing Engel. But Engel’s disadvantage among non-white Democratic voters may spell the end of a career that stretches back to the tail end of the Reagan administration. He trails by 10 points in a recent poll by a left-wing firm. For an incumbent in a primary, that’s an appalling number. This would be a massive win for the far-left social-justice movement in Congress.