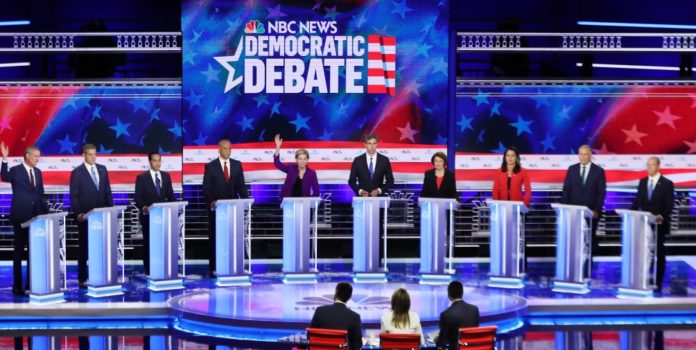 According to National Journal’s Josh Kraushaar, tonight’s Democratic debate promises to be a train wreck.

Instead of a winnowed field of candidates, the Democratic Party is faced with another crowded debate stage with few answers to important questions. Viewers of the last few debates have grown accustomed to one-liners and tepid answers rather than the candidates describing their policy differences. Nobody has been able to pull away from the pack, and as the primary drags out this will become a bigger problem for Democrats.

Two weeks ago, former New York Mayor Michael Bloomberg entered the race, promising to bring a moderate voice to the mix. Former Massachusetts governor Patrick Deval entered the race just last week. The reason for these new entries is that the Democratic field looks weaker and weaker with each passing day. The party has not coalesced around a candidate and instead the efforts and fundraising are spread thin. This weak field leaves the door open for any Democrat to enter the race. Voters are finding it harder to distinguish between the candidates and even Joe Biden doesn’t look strong in the face of this confusion.

With less than three months until the Iowa caucuses, Democrats are still desperately searching for their candidate.