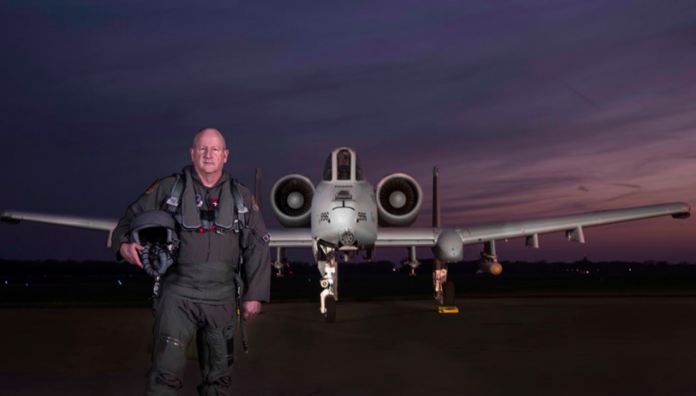 He’s running for Congressman Paul Mitchell’s seat, who announced earlier this year that he’ll be retiring after this term, leaving a vacancy for 2020.

The 10th District is expected to stay in Republican hands. Mitchell won the General Election by over 25 points in 2018 and over 30 points in 2016.

MIRS News reported that a self-funding candidate will also be entering the race.

The Air Force veteran and fighter pilot with over 35 years of military service has immediately become the frontrunner in the race. In Slocum’s campaign announcement video he says that serving the country and Michigan in uniform has been a privilege but “my mission is not yet done.”

“Washington is being overrun with politicians driven by their own self-interests and not the values I fought to protect,” Slocum said. “We need real leaders in Congress to work with President Donald Trump and stand up for the principles on which our country was built: defending life, securing our borders and growing a robust and vibrant economy.”

Slocum is well known in the district and across the state for his last assignment as the commanding general of the 127th Wing and Selfridge Air National Guard Base in Harrison Township.

He also served as the Director of Safety for the Air National Guard and was credited with leading the four safest years in the organization’s history. He created a program that worked to reduce human error in aircraft maintenance. It led to a 76 percent decrease in preventable mishaps that saved more than $78 million. Slocum was inducted into the Air Force Safety Hall of Fame in 2013.

Shortly after Slocum announced, he was attacked by State Representative Hernandez’s consultants for sitting with Democrats at Governor Whitmer’s first State of the State Address.

Although it has some conservative activists concerned, it might not be as big of a problem as some believe, considering the Democratic Governor Whitmer is commander-in-chief of the state’s military forces.

It will be interesting to see which individuals and organizations ultimately end up supporting Slocum. Any association with the “With Honor” group that elected Nancy Pelosi Speaker of the House would be a problem for him.

Conservative Intelligence Briefing outlined how this is a Democratic front group, bankrolled by wealthy liberals who are trying to interfere in Republican congressional primaries.

In the first ballot test question, respondents were told only their names as they would appear on the actual ballot. Hernandez and Slocum were neck and neck, with Hernandez receiving 17%, Slocum with 15%, and 68% undecided.

The poll then asked the same question again, but this time used their titles, “State Representative” for Hernandez and “Brigadier General” for Slocum. The new information changed the results significantly. Slocum took a double-digit lead and received 28%, Hernandez 16%, and 57% undecided.

It’s clear that voters prefer a military veteran to a politician and Slocum will be difficult to beat if he’s able to show this contrast.