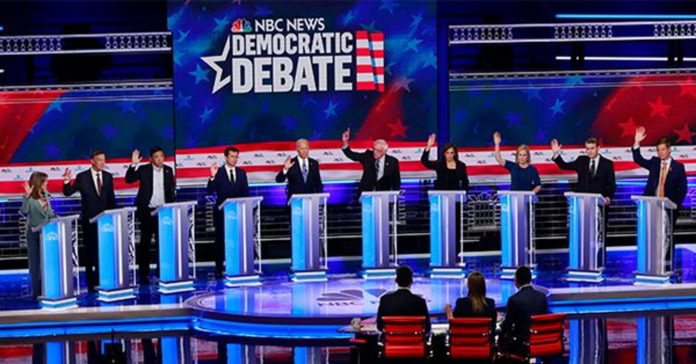 Happy Independence Day to our readers.

The Briefing will be off next week. We return July 15.

Democrats: Last week’s debates provided a good first look at the developing primary contest on the Democratic side. It’s a very, very left-wing field, shaped primarily by the white and well-to-do urban gentry and the woke Internet culture they have spawned.

Already, the debates have the Democrats getting suitably hostile toward one another and taking the gloves off. Below, in no particular order, is a look at how some of the best and worst Democratic candidates fared, and what we can expect as primary season continues.

Joe Biden: If not for the negative consequences inherent in not showing up, Biden would have been better off not showing up for his debate.

This debate was 100% unhelpful to his chances.

As with any frontrunner, he became smaller by standing on the same stage as hopeless blow-hards like Eric Swalwell and weird types like Marianne Williamson.

But beyond that, his relatively poor personal performance in the debate proved that he bleeds. It left Democratic watchers doubting his mental acuity and raising questions about his advanced age. And it gave Kamala Harris an easy, cheap shot at him for alleged racial transgressions (more on that below).

On the other hand, his best moment came when he attacked Harris’ Achilles heel: “I was a public defender. I didn’t become a prosecutor. I left a good firm to become a public defender when in fact my city was in flames because of the assassination of Dr. King.”

According to all of the polling, Biden remains the Democrats’ best chance at the presidency by far. Because of their overwhelming desire to defeat President Trump, this debate setback might not hurt his chances much. But his stature has diminished as a result of last week’s debate.

Biden continues to stumble. Even if he ultimately wins the nomination, his constant self-inflicted wounds will continue giving other candidates hope until the end.

Kamala Harris: She came away the clear winner of debate night two after moderators let her unleash a pre-planned set-piece against Biden on race. She savaged him for his erstwhile opposition to school busing and his talk of working together with segregationist Democrats in the Senate in the late 1970s.

Was it fair? Not really. As Rep. John Lewis, D-Ga., later pointed out, the facts of life required elected officials at that time to deal with segregationists, who controlled powerful committees. And Biden was not talking about agreeing with such pols about segregation, only about working with people he disagreed with to get things done — you know, what people have been pretending for years is an important thing to do.

But it has to be hilarious for conservatives to watch Biden, the Democrats’ best hope, hoisted by their own race-mongering petard. Will their attempt to racialize every disagreement finally backfire in this magnificent fashion? It couldn’t happen to a nicer party.

Bernie Sanders: He was arguably the biggest loser of either debate, for two main reasons that deserve some elaboration. The first (which we’ll return to) is that he did badly. But the second is that he is a victim of his own success. Sanders’ far-left influence on the Democratic Party has been so pervasive that his own candidacy is now unnecessary.

Nearly all of the Democrats now support Sanders-ism. Last time, his ideology was novel. This time, all or nearly all Democratic presidential candidates back some version of his plaform, perhaps with some tweaks — Medicare for All, zero deportations, taxpayer-funded abortions, free college, tax-funded childcare, etc., etc. These are all either his original ideas or offshoots of his philosophy.

But either way, the proliferation of Sanders-ism sounds the death-knell for Sanders. Here’s why: If you have a choice between a youthful and promising candidate and an octogenarian who believes exactly the same things — well, which one would pick? Sure, there are some “Sanders or Death” types out there, but it’s a safe bet that most of these care about socialism more than Sanders himself. He’s expendable. In the version of U.S. history that socialists would like to write, he has to be Moses, and he never gets to lead his people into the promised land.

As to the first reason for Sanders’ failure — his poor debate performance — don’t blame him. Blame the fact that socialism has been tried before or at least considered.

And guess what? The costs were so prohibitive that voters rejected the idea four-to-one in Colorado, and left-wing Democrats abandoned the efforts in Vermont (yes, Sanders’ Vermont) and California. In each case, the reason was that each statewide single-payer proposal would have cost two to three times the entire existing state budget.

Over the two nights of Democratic debates, John Delaney and Michael Bennet (who both have no hope of the nomination) brought up the major flaws in Medicare for All. And Sanders, sadly, had no answers to either of them, besides a rhetorical flourish about how it will work because the government will “tell insurance companies and the drug companies their day is gone, that healthcare is a human right.”

That and five bucks will get you a cup of coffee at Starbucks.

Democrats might never accept that Medicare for All won’t work, but they’d surely like a socialist champion who can at least give it a plausible excuse.

Elizabeth Warren: She has been emerging lately as the best alternative to Bernie Sanders. She did nothing in last Wednesday’s debate to harm her prospects in that regard. Conservatives may think she made a mistake in embracing the abolition of private health insurance, but at least for now, in the primary, this is a smart choice.

Aside from that, Warren did and said nothing remarkable, and that’s just fine. She has a very good shot at the nomination. Just let Sanders slowly decline, work on that Iowa operation, and pray that Biden continues to unimpress liberal-leaning but establishment Democrats.

Julian Castro: After his debate performance, the former HUD secretary’s candidacy can now be summed up in two words: Transgender abortions.

He literally came out in favor of abortions for biological men who self-identify as women. Don’t tell him “but they can’t have babies,” it makes you some kind of bigot.

His response to the police shooting in Pete Buttigieg’s South Bend thoroughly earned him the withering glare of death that the mayor shot back at him. “You should fire the chief,” Swalwell said, “if that’s the policy and somebody died.” He was referring to a case where a suspect allegedly attacked an officer with a knife. If that’s not grounds for using deadly force, there won’t be police officers because no one signs up for day-to-day suicide jobs.

It may be a mistake to spend this many words on Swalwell, whose name is sure to be forgotten soon enough, but his idiocy is a useful reminder of Democrats’ excesses when it comes to discussing police culpability. Although there are bad and poorly trained cops, most police shootings are justified, and no cop wants to be involved in a bad shooting.

Pete Buttigieg: Speaking of the mayor, his constant attempts to wax philosophical and sound wise beyond his years are typical of his academic upbringing and educational background. They are sure to be annoying for a lot of voters, but appealing for others.

They will probably not propel him to the nomination, but they will keep the money coming in to his campaign. That’s great news for him and terrible news for Kamala Harris, whose cash supply he is eroding. We will have to learn more about how this is going next month, then the second-quarter fundraising reports come out.

His troubles back home with a police shooting probably won’t affect his support, which generally comes from a whiter demographic within his party.

Cory Booker: With Kamala Harris taking over his attacks on Joe Biden, he remains as insignificant as ever. His performance was not noteworthy.

Beto O’Rourke: O’Rourke’s candidacy has been insignificant so far, and remains so after his not-too-bad debate performance.