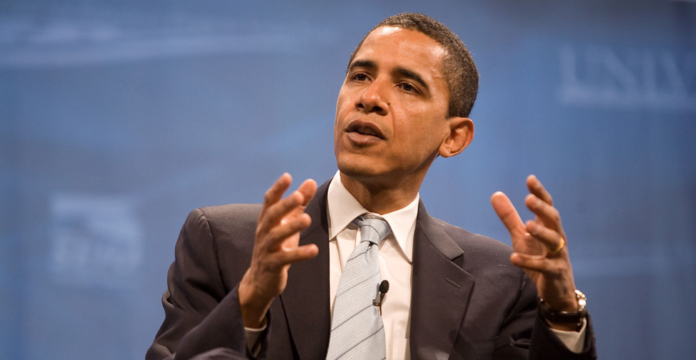 “One of the things I do worry about sometimes among progressives in the United States — maybe it’s true here as well — is a certain kind of rigidity where we say, ‘Uh, I’m sorry, this is how it’s going to be,’” former President Barack Obama said last week in Berlin. “And then we start sometimes creating what’s called a ‘circular firing squad’, where you start shooting at your allies because one of them has strayed from purity on the issues. And when that happens, typically the overall effort and movement weakens.”

Obama’s comments can be taken in one of two senses, and probably apply equally well in both.

The first pertains to the fanatical purging of longstanding moderate Democratic views from the party. As the Democrats lurch sharply left — preaching, for example, slavery reparations, packing the Supreme Court, abolishing the Electoral College, forcing men into women’s sports, and abortions up to and after the moment of birth — everyone left behind will face a choice of either joining the mob or quitting the party.

Unity 2020? The other way of reading Obama’s comments is the more obvious one for the presidential season. He is anticipating a sharp and biting Democratic primary, resembling the GOP presidential primary of 2016. He thinks that’s a bad thing for Democrats. And he’s wrong.

Between Obama’s re-election and Hillary Clinton’s expected coronations in 2008 (never realized) and 2016, Democrats have not had a truly wide open and competitive multi-candidate primary since 2004. A real knife-fight, Obama seems to fear, could shake and demoralize the faithful. It could go very negative, providing each candidate with multiple opportunities to shank the others for this or that transgression or deviation from orthodoxy.

But Obama, who never had to compete in such a clown-car environment, seems to underestimate the value of such a confrontation. After all, in 2008, he was uniquely blessed with an opponent who did the work of cutting her own throat for him.

Obama seems to think that a nasty crowded primary will lead to the nomination of a weakened candidate. To the contrary, it benefits everyone to air all the dirty laundry before the general election. Imagine, for example, if Democrats refrain from attacking former Rep. Beto O’Rourke, D, over his attempt to flee the scene of his drunken driving crash. If O’Rourke is able to win because of this politeness, Republicans will use this serious breach of judgment to tear him limb from limb. Thus, it’s best for Democrats if they shank each other now, to weed out the weak candidates in the 18-person field.

Consent of the rank and file: According to Obama’s theory, Republicans emerged weaker in 2016. Their fractious multi-way primary led from a theoretically strong and experienced GOP field to an amateur nominee.

But again, this fails to appreciate the nature of Trump’s rise. His nomination forced the Republican establishment to come to terms with just how far out of touch they had become from the party’s base. Everyone was anticipating that most base voters would favor a severe (for lack of a better word) conservatism along Tea Party lines. Instead, Trump kept winning pluralities in state after state. He was both bringing new voters into the party and proving that ideological rigidity is not necessarily the winning formula in a contest where personality matters most.

So, are Democratic politicians more in touch with the Democratic base than Republicans were with the Republican base in 2016? We suspect they are even more out of touch, if anything.

If the Democratic base — led by more moderate black and Hispanic voters — rejects the party’s current leftward lurch and nominates someone less extreme — say, Joe Biden, choosing not to care about his #MeToo behavior — then they will have sent a message to their party’s establishment very similar to the one Republicans sent to theirs in 2016.

Alabama: Despite the rumors Rep. Matt Gaetz, R-Fla., has no intention of carpetbagging across the border and running for Senate in Alabama, according to local news reports.

Maine: Sen. Susan Collins, R, whose enduring popularity we recently noted, will not have to face Obama-era UN Ambassador and National Security Advisor Susan Rice, D. Rice had earlier talked about making a run against her, but it has to be daunting, in light of Collins’ strong approval ratings.

Meanwhile, Sen. Joe Manchin endorsed Collins for re-election last week — a very unusual bipartisan move, something you really just never see. The most recent analogue is probably the Bush Administration’s support for Sen. Joe Lieberman, D, in 2006, but that was against a left-wing Democratic nominee.

New Hampshire: Republicans would love nothing more than to put this race on the board. In a cycle where Democrats have yet to exploit any of their best takeover opportunities with good recruits, they can put to rest Democrats’ hopes of a Senate takeover if they can do some solid recruitment of their own.

One instance of this probably means having Gov. Chris Sununu, R, challenge Sen. Jeanne Shaheen, D. It was rumored last week that Sununu had already ruled this out and intends to run for re-election. However, he denied this report when asked about it, stating, “Whether I run for reelection, the United States Senate or go back to the private sector — I will make that decision later this spring with (his wife) Valerie and the kids.”

Sununu has already dangled a possible run out there remarking pointedly about how “vulnerable” Shaheen appears. She very narrowly survived her 2014 race against former Massachusetts Sen. Scott Brown, R — one of the very few bright points for Democrats in that election. Shaheen announced last week that she had raised $1.4 million — a record, and on pace for what she’s going to need if she gets a real race.

It is unclear what significance, if any, to attach to Lara Trump’s comment that she believes Sununu should stay in New Hampshire and run for re-election. It could evince a belief by the Trump 2020 operation that it helps the president’s chances having Sununu at the top of the ticket.

If Sununu were to run for Senate, Former Sen. Kelly Ayotte, R, might run to replace him as governor.