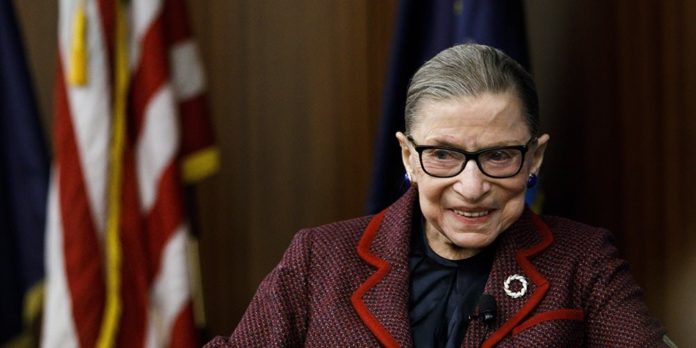 Justice Ruth Bader Ginsburg missed oral arguments at the Supreme Court for the first time in her 25-year career.

The Supreme Court spokeswoman, Kathy Arberg, and Chief Just Roberts both assured the press that Justice Ginsburg would participate in the Court’s activity remotely, The Hill reports:

“The Supreme Court justices were back on the bench Monday for the first time in the new year, hearing arguments in two cases.

The first case is a battle over the preemption of federal and state laws, and the second case is over fair debt collection laws and whether they apply to nonjudicial foreclosures, which do not require a court’s approval.

The Supreme Court could not say if Ginsburg will be out for the remainder of the week. The justices are scheduled to hear arguments on Tuesday and Wednesday.

Chief Justice John Roberts briefly announced Ginsburg’s absence from the bench at the start of Monday’s proceedings. He said Ginsburg is unable to attend the arguments, but would still participate in the decision of the case by way of briefs and transcripts.”

Justice Ginsburg, now 85 years old, broke three ribs in a fall at her residence in November.  Doctors discovered early stages of lung cancer during her treatment for the injury and she successfully underwent minor surgery to remove the growths in December. This was her third treatment for cancer, according to the Washington Post.