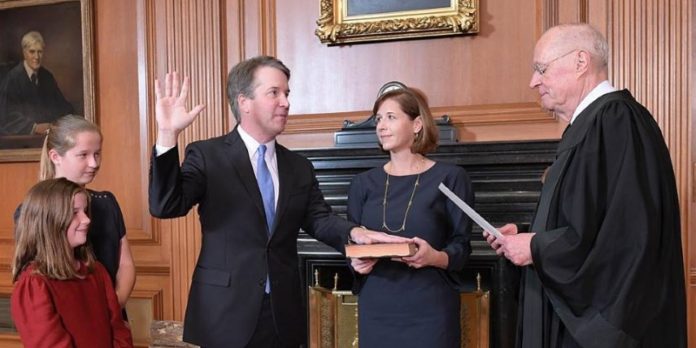 Something funny happened in the days just before Brett Kavanaugh’s confirmation to the Supreme Court. Republicans suddenly got a substantial and noticeable bump in Senate polls in a couple of the key races.

What’s more, they have closed the “enthusiasm gap” in the polls generally. Republican voters surprisingly now exceed the angry anti-Trump “resistance” in their desire and eagerness to vote. The Democrats’ built-in advantage, which underpins a lot of assumptions about voter turnout, could now be creating some questionable assumptions.

Counterintuitively — at least for those in the Beltway — women have led the way in breaking Republican. Quinnipiac’s poll showed the GOP now in a virtual tie among white women, whereas they had trailed by five points in the previous poll. The overall difference between the parties on the generic ballot had been 14 points in Democrats’ favor a month earlier; now it was just seven points.

FiveThirtyEight is skeptical that Republicans have accomplished much on the generic ballot, but they calculate that GOP odds of retaining the Senate have increased to about 77 percent, up from about 70, since before the first round of confirmation hearings.

So yes, the unsubstantiated attacks on Kavanaugh appear to have engendered a backlash of some kind. So did the the concerted attempt to frame any reasonable doubts about the accusations as anti-woman and pro-rape. The question is whether Republicans can make this backlash into something lasting enough to make a difference next month.

Presumption of innocence: The reason for the backlash is pretty obvious to anyone who watched the special hearing featuring Kavanaugh and his accuser dispassionately. For anyone with a brother, father or husband, it’s evident that anyone who lived in their vicinity decades ago could launch a similar accusation, vague as it was on dates and locations and with no corroborating witnesses.

Moreover, most people thus accused would probably have a lot less documentation than Kavanaugh did as to their whereabouts throughout an entire summer. In short, such accusations — true, false, or just mistaken — would be much more likely to destroy the average person’s life than Kavanaugh’s. (He’s surely very glad he kept those calendars.)

Democrats’ handling of the accusation, of course, was always a separate issue from the accuracy of the accusation itself. There’s no question at all that their decision not to investigate it quietly, but rather to hold it and leak it at the last minute was part of a cynical strategy to delay the appointment until after the election. What’s more, the additional and far less credible accusations that followed — each one designed to create an appearance of a pattern of behavior — actually had the opposite effect, diminishing the credibility of all the allegations. By the end, Democrats were cursing attorney Michael Avenatti for his intervention with a completely non-credible client and accusation. They actually blamed him for making Kavanaugh’s confirmation possible, which may be an exaggeration but only just. For her part, Sen. Susan Collins, R-Maine, cited Avenatti and his client in her speech explaining why she would be voting for the nominee. At the very least, he gave her sufficient cover to do so.

Role of the FBI investigation: The late decision by Sen. Jeff Flake, R-Ariz., to demand an FBI investigation turned out to be very prudent. Although Democrats naturally rejected and complained bitterly about the investigation that they had been demanding, its existence surely helped lead Collins to a decision she might not have chosen otherwise. Moreover, it further exposed the cynicism behind Democrats’ delay tactics. Their talking points — about the failure to interview Kavanaugh’s high school friend Mark Judge, for example — were laid bare as the distraction they had been the entire time.

If the Kavanaugh drama is behind the sudden surge in Republican fortunes, then this is probably why. And by bringing the vote and the victory closer to Election Day, the FBI investigation ended up working out pretty well for the Senate majority.

The other benefit, of course, is the simple morale boost from a big victory. In a sense, this was President Trump’s biggest victory yet. He has established what is expected to be a solidly conservative majority on the Supreme Court — something that so many Republican candidates had long promised and never delivered. It’s an historic accomplishment.

And if the GOP keeps the Senate in next month’s election, Trump may even have the chance to appoint another justice before the end of his first term in office.

Arizona: Republicans have not gotten the bounce they wanted in this race. Kyrsten Sinema continues to hold a narrow but persistent lead over Rep. Martha McSally, R. Democrats must win this seat, along with Nevada Sen. Dean Heller’s, in order to take the Senate. At the moment, they seem to be winning both. Leaning Democratic takeover.

Montana: This is still a very hot race, with outside ideological and corporate groups spending on all sides. In fact, between “Majority Forward” (a group allied to Harry Reid’s “Senate Majority PAC”) and the DSCC, Democrats poured in more than a million dollars last week, an enormous sum for such a small state. They understand that this one could yet go sideways for them.

The direction of this race hasn’t been tested in public since the ugly Kavanaugh saga got going in earnest. Tester’s “no” vote on the nomination was declared early on, but if the vicious campaign that took place is going to make a difference anywhere, Montana would be such a place. Leaning Democratic retention.

North Dakota: Democratic Sen. Heidi Heitkamp’s vote against Justice Kavanaugh is not the nail in her coffin — rather, it’s an admission that she’s behind and that the Democratic Party is on the point of giving her up for dead.

In the absence of party-based and large-donor funding, her only hope to keep her campaign up on air will be her appeal to the left-wing grassroots. Her vote against the new Supreme Court justice leaves her in a credible position to do that — indeed, within minutes of her vote, California Sen. Kamala Harris was already pumping her own email list for donations to Heitkamp. But it isn’t going to work wonders for her support from voters.

Rep. Kevin Cramer, R, now consistently leads the race, and Republicans had already cancelled ads in the state before she even announced her vote. There’s still a whole month left, but it’s hard to see how she comes back.

There are no certainties at election time. But if this one’s really in the bag, Republicans have the luxury of turning their sights to other races where small expenditures could matter, like Montana, where there haven’t been any new polls since the Democrats’ assault on Kavanaugh began. Likely Republican Takeover.

Tennessee: Despite Taylor Swift’s endorsement of Democrat Phil Bredesen over the weekend, Rep. Marsha Blackburn finally seems to be pinning this one down. That’s very good news for Republicans, as a win in Tennessee, combined with an increasingly likely win in North Dakota, means they are certain to keep control of the Senate, although perhaps very narrowly.

Outside Democratic money has nearly dried up in this race. Only two groups spent last week, and most of that was a modest online ad buy for a group supposedly doing only “nonpartisan voter registration work.”

This is one state where the battle over Kavanaugh definitely seems to have helped the Republican candidate — something Bredesen basically acknowledged when he endorsed the Supreme Court nominee on the eve of the Senate floor vote. Blackburn’s lead appears to be growing and almost comfortable, and she was tied or behind as of mid-September. Likely Republican Retention.