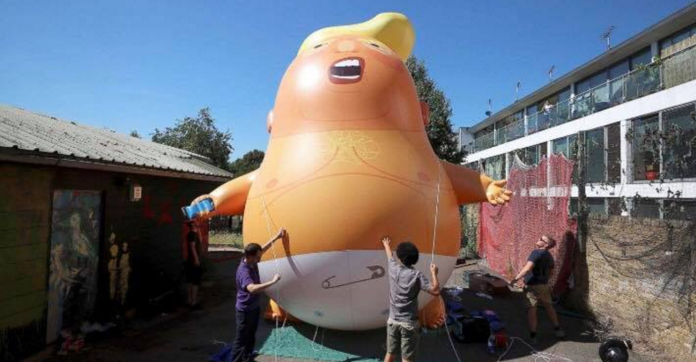 Leftist protesters, this time from across the pond, have come up with a rather childish—no, really—insult for President Trump’s upcoming visit to the United Kingdom. And the mayor of London gave the plan a green light.

London Mayor Sadiq Khan has approved the request of an activist group to fly a giant balloon in the form of a baby President Trump over Parliament Square during his visit to the UK this month, according to a report from Sky News.

The protesters bill themselves as “anti-fascists” and refer to President Trump as a fascist.

“Describing Mr Trump as a ‘dangerous excuse for a president’, the group’s spokesperson, Nona Hurkmans, said: ‘We are just a small group of friends who set out to show that fascists are not welcome in the UK.'”

The group’s Crowdfunder page explains the rationale for the blimp’s design: “Donald Trump is a big, angry baby with a fragile ego and tiny hands.”

“He’s also racist demagogue who is a danger to women, immigrants and minorities and a mortal threat to world peace and the very future of life on earth,” the description continues.

A spokesperson for Mayor Khan told the news outlet that London’s mayor “supports the right to peaceful protest and understands that this can take many different forms” and that the mayor’s “city operations team have met with the organisers and have given them permission to use Parliament Square Garden as a grounding point for the blimp.”