For decades, conservatives have longed for this opportunity. And here it is.

Kennedy surprisingly saved Roe from extinction in 1992. One could almost say that he personally established 50-state gay marriage in 2015. He also took the court in the direction of reading or deciding society’s perception on the death penalty as a form of cruel and unusual punishment.

But Kennedy was not an out-and-out liberal. He was a backer of the traditional American view of the First Amendment freedoms of speech, religion, and association. He embraced the old maximalist view of the Constitution’s first freedoms that is now coming under assault from an increasingly strident Left.

Kennedy’s impulses on the First Amendment motivated him to side with the court’s conservatives in favor of liberating people to join together and spend on political campaigns (in Citizens United), against Obamacare’s compulsory insurance ownership, against compulsory financial support of unions by workers (in Friedrichs, Knox and Janus) and in favor of business owners persecuted for refusing to provide abortifacient drugs (Hobby Lobby) or participate in gay marriages (Masterpiece Cakeshop).

With Kennedy’s retirement, conservatives are being given a chance at a game-changing upgrade. Liberals are freaking out, but they are absolutely right to freak out over this.

The magnitude of what Trump is about to do, and its potential effects on the nation, cannot be overstated. Conservatives are so accustomed to having liberal judges come up with specious reasons to strike down their attempted reforms, that they may not even be prepared for a world in which it stops happening.

Trump’s impression upon the court will be very long lasting. As he put it, he wants his next appointment to serve on the court for upwards of four decades.

He just appointed a 50-year-old to the court last year. The youngest person on his current Supreme Court shortlist is now 37 years old, although he is more likely to appoint someone closer to 50, such as Utah Sen. Mike Lee, Brett Kavanaugh, or Amy Coney Barrett. Trump’s justices — two or more — might still be serving on the Supreme Court in the year 2060. That’s good news for fundamental freedoms that seem to be in peril — specifically, the religious and speech freedom rights that the court decided in 5-4 decisions in this Supreme Court term now ended.

Those who argued in favor of supporting Trump in 2016 because of judges will be vindicated completely if he is the president who breaks the liberals’ stranglehold by replacing Kennedy with a conservative. The flipping of the Supreme Court has been so critical to conservatism’s success that Trump may succeed in unifying his party to a greater degree than he had previously.

Utah Senate candidate Mitt Romney, R, is reserving judgment on whether he will support Trump in 2020, but the fact is, this victory, if it becomes that, will force even hardened never-Trumpers to at least reconsider their antipathy toward Trump. 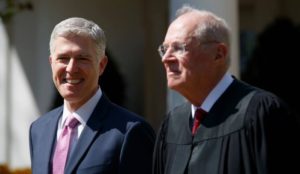 Meanwhile, in the short run, the vote on the nominee will put many Democratic senators in an awkward position. For at least five Democrats defending Red-state seats this year, a vote against Trump’s nominee would be damaging.

But some of these Democratic senators (such as Missouri Sen. Claire McCaskill and Montana’s Jon Tester) voted against Gorsuch. They will take additional flak from Republicans, but they will likely see no reason to change their strategy now.

The even greater danger for these Democrats is not that they will be criticized for voting against Trump’s nominee, but rather that their party will actually succeed (with the help of one or two Republicans) in borking the nominee this fall, within weeks of the election.

Such a spectacle could change the face of the coming election, galvanizing Republican voters everywhere and giving them much more incentive to turn out and vote than they have to this point displayed. This is why Trump’s nominee, if he or she performs well in hearings, is highly likely to be confirmed. And of course, looming in the background is the abolition of the judicial filibuster, which Democrats initiated in 2013 and Republicans expanded to include Supreme Court nominees last year.

Similarly, Democrats risk demoralizing their base if too many of them cross the aisle to help Trump’s nominee (three did so for Gorsuch — Sens. Joe Donnelly, D-Ind., Joe Manchin, D-W.Va., and Heidi Heitkamp, D-N.D.).

But in a day and age when abortion is arguably the most important and unifying value of the modern Democratic Party, many Democratic voters could despair if too many Democrats cross the aisle this time.

Another note: Because of Roy Moore’s loss in Alabama late last year, it will be a bit harder to move the new nominee through the process than it was to move Neil Gorsuch. Sen. Doug Jones, D-Ala., may have a limited lifespan in the Senate, but he will be there to vote against Trump’s nominee, whoever it is. That means Republicans can afford to lose on net no more than one senator. If Senators Susan Collins, R-Maine, and Lisa Murkowski, R-Alaska, both bail out because they are afraid of a reversal of Roe v. Wade, then Republicans must make up the difference by wooing Democrats.