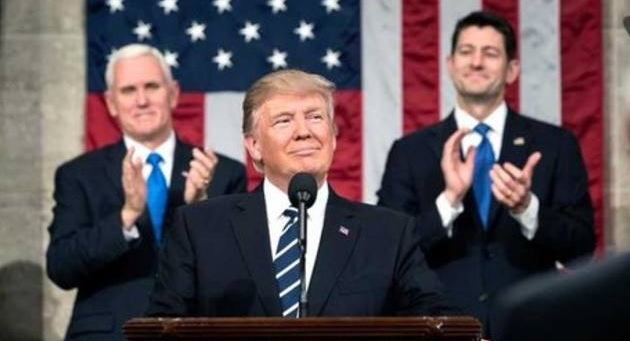 State of the Union: Trump’s State of the Union speech was a huge success, without question. Democrats could frown and sit on their hands all they liked, but it was among the better speeches he has given since entering public life, including his election night speech and his address to Congress a year ago.

Trump’s speech immediately resulted in a minor surge in his approval rating, back into the low 40s, putting him ahead of where he was on Election Day 2016.

The address reintroduced the impression of Trump’s reasonableness and seriousness, which he so often squanders on social media. This Trump, were he to persist for more than a few days, would have much better poll numbers, and much better chances of re-election.

On immigration, which will soon be the subject of a new shutdown-showdown, Trump continues to redefine the conversation. When the word “enforcement” is invoked, it is no longer just a buzzword as in past immigration debates, but an earnest proposal sure to be acted on. Trump deftly tied in the delicate problem of crime that results from illegal immigration by highlighting victims in the audience. And this position, long avoided by Washington’s establishment, has finally become a mainstream one.

Trump spoke at great length, delivering the longest State of the Union speech so far this century. In doing so, he avoided the pitfalls of other long speeches he has given — all the asides and ad hoc additions that he is famous for. He also had time to touch on critical issues of every nature, including infrastructure (likely the next big initiative of his administration) and North Korea, and to toot his own horn on the tax reform bill he recently signed, as well as the good-looking economic numbers in the areas of jobs, growth, and (even after the terrible week on Wall Street that followed) the stock market.

In short, Trump probably got about as much out of this opportunity as he possibly could have. Although his spontaneous and brash style worked mightily in his favor as he sought the presidency, his subdued and serious tone of last Tuesday night, as well as his sticking to the script, has proven to work very well for him in the White House whenever he has tried it. If he dares try it in the future, he might find it surprisingly useful to his presidency.

FISA Memo: Republicans in Congress finally managed to release the now-famous memo they’d spent so long talking about. It reveals abuses of the foreign intelligence surveillance courts by the Obama administration, but not necessarily in the sense they let on. The sad fact is, it takes nothing more than mere suspicion to obtain a foreign surveillance warrant, even where an American citizen is involved. This was the case before Obama and continues to be the case now.

Of course, the FISA memo is more politically charged than that related fact, but not much has changed as a result of its release. Democrats are still hoping against hope, just as before, that the Russia investigation will somehow bring Trump down. They don’t seem to care that this just isn’t going to happen, nor even that his replacement by Vice President Mike Pence might actually be the worst thing that could happen to them in what is so far.

What the memo shows is that the FBI relied upon the infamous Steele Dossier and derivative materials in order to get permission to spy on Carter Page. It additionally notes that the government did not make any note of the dossier’s unreliable nature, or doubts about Steele, in its application. In all honesty, it would not be normal for the government to do this in a warrant application. Still, it asserts that Steele might have actually lied to FBI agents about having leaked information to the media.

So no, this memo won’t create a political sensation, except with Trump’s closest devotees. But as we have long maintained, nor will the Russia investigation, in all likelihood. As we predicted, this is already looking like the Paul Manafort investigation.

Florida: With many things going wrong for Republicans at the moment, they don’t seem to be so bad in Florida. Gov. Rick Scott, R, has built up an impressive 58 percent approval rating. This will come in handy as he seeks to challenge Sen. Bill Nelson, D, as will Scott’s personal fortune.

If Republicans can put this race into play, they’re a very strong bet for keeping the Senate.

Missouri: Is Republican Rep. Ann Wagner thinking of getting back into the Missouri Senate race? The only solid indication of this is a telephone poll that was being taken in the state last month, which no one in the state seems willing to take responsibility for.

It would be bad news for Republicans if she is, after it appeared Attorney General Josh Hawley had cleared the field for his challenge to Sen. Claire McCaskill, D. But it remains unlikely.

New Jersey: Sen. Bob Menendez, D, was fortunate enough to have the charges against him of bribery and corruption dropped. The government will not retry him. But that doesn’t fix his atrocious and lowest-in-the-Senate 29 percent approval rating in the latest Morning Consult survey for the fourth quarter of 2017.

Utah: Mitt Romney will be making an announcement for this open Senate seat on February 15. In the meantime, weirdly, people are already talking about making him chairman of the National Republican Senatorial Committee for the 2020 cycle — that is, giving him an instant Senate leadership position. In fact, it appears that the current chairman, Cory Gardner, wants Romney to succeed himself.