Curb your voter enthusiasm: President Trump has a way of getting under Democrats’ skin. He does it effortlessly, but sometimes he also puts in quite a bit of effort.

And the irritation it has caused them is manifesting itself now in an unusually enthusiastic and involved Democratic electorate. With each low-turnout special election, it has been clear that Democrats are turning out disproportionately. Their backlash against Trump seems to be the main cause.

Still, it hasn’t done them that much good, aside from a couple of obscure state legislative races. Democrats’ near-victories in special congressional elections in Georgia, Kansas, Montana and South Carolina still all turned out to be losses — some of them very expensive losses.

Iron-’stache: And they aren’t about to give up with the uphill races, either. Here’s 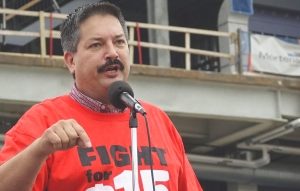 an interesting story about a 2018 race where Democratic fundraising is noteworthy. After extremely favorable media coverage this summer, a moustachioed fellow named Randy Bryce has raised $1.5 million for a congressional campaign in a single quarter. That’s impressive all on its own, but doubly impressive for an unknown candidate to raise that kind of money against the Speaker of the House.

Equally impressive, though, is the almost certain futility of this gesture. Paul Ryan’s district is definitely not where Democrats want to be concentrating their resources right now. There are 44 Republican-held seats where they have far more realistic chances of winning just by the numbers — never mind that Ryan is personally popular and would be even harder to beat than the partisan makeup of his district suggests.

The problem is that at the grassroots level, Democrats have stopped trusting their party committees. And left to their own devices, they are placing bets on candidates who are, in some cases, politely described as longshots with too much media exposure.

You can blame the Sanders-Clinton bitterness, or perhaps some other factor, but Democratic voters’ antipathy toward Trump has not translated into any sort of massive boost in small-dollar donations for the Democratic party committees that can actually make a difference in coming elections. The RNC is cleaning the DNC’s clock when it comes to small donor giving — $40 million to just $25 million. And bear in mind that this category of giving does not include the more mercenary large donors, only the small donors who give less than $200 each. This isn’t a shift by business interests seeking to curry favor with those in power — it’s a move by grassroots donors to keep their wallets closed.

To be sure, there are still plenty of signs that Democratic voter enthusiasm abounds. Polls currently show Democrats with something like a 10-point enthusiasm gap when it comes to the interest their voters are showing toward next year’s midterm elections.

The resignation of Rep. Tim Murphy, R-Pa., will likely give Democrats an additional shot at gaining a House seat in the coming months. As with the soon-to-be-vacant 10th District at the opposite corner of the state, this will provide Democrats with yet another chance to demonstrate the enthusiasm of their base and perhaps even pick up a seat that would be more of a longshot in a regular election.

Virginia: Lt. Gov. Ralph Northam, D, carries a clear lead into the last month of the 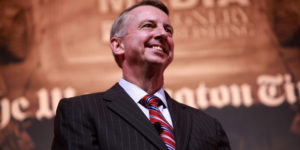 campaign. The new Washington Post poll has him 13 points ahead of former RNC Chairman Ed Gillespie, albeit with many softly committed or undecided voters. Importantly, Northam’s numbers are north of 50 percent in this poll of likely voters.

There are two recent polls from credible firms that suggest a closer race. But not a single poll since March has shown a lead for Gillespie. Which means that if Gillespie wins, it will have to be by confounding the turnout expectations of the experts. It will also require him to overcome a two-to-one fundraising deficit.

Maybe that sounds like a cop-out, but really it’s a more serious commentary than you might expect. In 2014, Gillespie was a huge underdog against incumbent Sen. Mark Warner, D, trailing him by about 10 points in every poll. He then came out of nowhere on election night and lost the race by less than one point. President Trump also kept Virginia unexpectedly close, although he did not do nearly as well as Gillespie had done in 2014.

Which is to say, recent experience suggests that Republicans might have better demographics in the state than many of the assumptions pollsters make. Gillespie is an underdog, to be sure, but Northam is not exactly Mr. Exciting, is far less popular than Warner, and will face a less Democratic off-year electorate. So don’t count Gillespie out completely. Leaning Democratic retention.

Indiana: In case Reps. Luke Messer and Todd Rokita become too lonely as the top dogs in the GOP primary for Senate, state Rep. Mike Braun has suddenly thrown $800,000 of his own money into the race, and raised another $200,000 to bring himself to $1 million.

That’s enough money at least to be taken seriously, although Braun is a less formidable candidate than either of the other two and still has less than half as much cash on hand as either of them.

But given the increasingly nasty public fight that’s developed between Messer and Rokita, it’s not completely out of the question that some third candidate couldn’t eventually benefit from a murder-suicide-type situation. Indiana’s primary comes relatively early next year, in May.

Grimm, a Republican, was forced to resign from Congress in January 2015 after pleading guilty to tax evasion. He had, incredibly, just won re-election in this fairly swingy seat despite being under indictment for the past eight months or so. A former FBI agent, Grimm then spent seven months in prison for tax evasion.

He has recently emerged as a pro-Trump commentator and will run at Donovan from his right, attacking him for being a bit of a squish. But Republicans in Staten Island and Bay Ridge are concerned that if he were to overcome his criminal conviction and win the primary, Grimm would lose the only Republican congressional seat left in New York City. This seat only slightly favors Republicans (its Cook Partisan Voting Index is R+3), and it’s the sort of seat that Democrats have to pick up if they want to win a House majority next year.

Ohio-16: If you’re interested in Republican NFL players (given the recent controversies) or in Hispanic Republicans, then here’s an item for you. Republican Rep. Jim Renacci’s run for governor has left this Republican-leaning district open. This week, former Indianapolis Colts and Ohio State wide receiver Anthony Gonzalez made clear his candidacy is serious by reporting $525,000 in donations and $100,000 more from the candidate himself, with a cash on hand total of $600,000. If this doesn’t make him the best-funded Republican candidate in the race, it will at least establish him as one of the top dogs.

Gonzalez is an outsider who grew up in and near the district but only recently moved back. State Reps. Christina Hagan and Tom Patton are also running. The local party establishment is expected to get behind Patton, who hasn’t yet released any campaign finance docs.