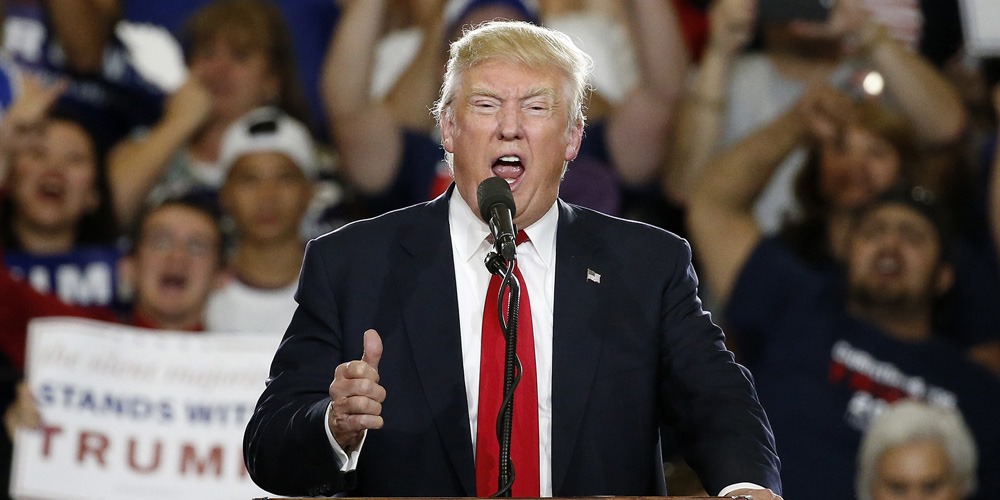 Trump sniping: Only a week ago, Donald Trump was sending a private message to Republican Senate candidates: Don’t worry, I won’t hold it against you if you refuse to back me.

The move seemed uncharacteristically mature for Trump. Up to now, he has tended to turn typical political behavior into a zero-sum ego game, in contrast with most politicians, who  know not to take things so personally.

Then again, this message was delivered by Paul Manafort, the same top aide who had promised earlier that Trump would pivot to behave in a more “presidential manner,” only to be overruled from within the campaign. Perhaps it was more Manafort’s wishful thinking than Trump’s true intention.

Sure enough, within days, Trump was spending his time on the stump savaging Republicans who have been avoiding him. On TK in Albuquerque, he took a shot at Gov. Susanna Martinez, R, the Republican Governors’ Association chair, who has pointedly refused to endorse and even criticized Trump during the primaries.

Just to round out the week, Trump added a late gratuitous shot at Ted Cruz, who had already dropped out of the race but has yet to make any official show of support for Trump:

“I wonder if I could say — you know, remember lyin’. Lyin’. I won’t say ‘Lyin’ Ted’ — I refuse to say it…Lyin’ Ted! Holds that Bible high, puts it down, and then he lies. Lyin’ Ted. Well, I’m going to retire that from Ted — I’m not going to call Ted that anymore.”

Let’s just set aside for a moment any pearl-clutching over the fact that Trump doesn’t seem to be honoring his promise. If it isn’t already clear by now that Trump’s word cannot be trusted on anything, it never will be. It’s a mistake even to attempt to ascribe meanings to the words that come out of his mouth — he merely says things to convey attitudes and provoke reactions.

So what sort of reaction is he going for here? It isn’t clear. Cruz won’t face re-election in Texas until 2018. Martinez, a second-term governor, is term-limited, having just been re-elected handily in 2014. Neither of them need to worry about Trump’s negative-coattail effect.

And in fact, Trump himself takes a risk in bashing them. Trump needs to win over as many Cruz supporters as he can, not only to guarantee a smooth convention but also to have a prayer in November. And the shot at Martinez at least doesn’t help if he’s trying to improve with women or Hispanic voters.

Beyond those two slights, though, Trump’s propensity to slam uncooperative Republicans raises once again the impossible-to-predict question of how he will affect the down-ticket vote.

Will down-ballot candidates hurt themselves by going against the Trump tide? Or will Republican voters largely not care, the same way most of them seem to be overlooking their own hesitations about Trump? Or will Trump’s sniping at them actually help them to burnish their credentials with other voters? Or will all of these effects just cancel each other out?

Keystone case study: The best example of a politician facing this question

is Pat Toomey, the conservative Pennsylvania senator who was narrowly elected in 2010 and still holds a narrow lead in most polls. In a normal year, he’d be favored to win in a close race.

But how will Pennsylvania’s Republican-sympathetic voters — i.e., the regular voters willing at least to consider voting GOP — respond to a candidate who fails to back Trump, especially if Trump doesn’t hold off with the sniping?

There does exist a template for this race, for how voters can respond differently to different Republicans on the ballot. In 2000, George W. Bush lost Pennsylvania with 2,281,000 votes, even as Rick Santorum, R-Pa., won re-election with almost exactly 200,000 votes more. Something similar happened in 2004 with Arlen Specter’s re-election, when Specter received roughly the same 2.9 million vote tally as John Kerry. But the parallel between candidates in 2000 is arguably much stronger. Still, there’s no one quite like Trump. It’s hard to cite historical parallels of any kind in 2016 with any reliability.

So yes, voters in Pennsylvania have been known to split tickets at the margins, and can sometimes do so in a Senate candidate’s favor, even if ticket-splitting seems like a thing of the past to many people.

It may be that the more reliable GOP voters (the ones who backed him in 2010) stick with Toomey, but he has never faced a statewide presidential-year electorate. That leaves an entire subset of nearly 1 million quadrennial GOP-sympathetic voters who haven’t voted for him before, but could well well turn out to vote for Trump.

It’s always worth noting that although Republican resistance to Trump has certainly weakened, there may be some significant number of Republicans who do not vote at all because of Trump. However, die-hard Never-Trumpers are probably among the most likely to vote (perhaps just not for president) out of anyone in the conservative universe. If Republican voters do refuse to turn out this year because of Trump, it will probably be the ones who follow politics less closely.

Trump is sure to compete for Pennsylvania, so if Toomey keeps his distance, will Trump get snippy about it? Will he lay off, but only on Senate candidates? And how would it affect Toomey?

On top of that, how will the new voters — the ones Trump promises he will bring into the process in November — react to Senate and other down-ballot races? Will they leave those races blank? Will they vote for a Democrat?

Or will Trump wise up a bit and make the case that he would be helped in office by having more Republicans in the Senate, even the ones who didn’t stand up to be counted for him?

Clinton’s emails: Hillary Clinton’s email problem isn’t just about her unprecedented handling of classified communications — it’s really a character issue. It’s about someone who views herself as above the law and frequently doesn’t tell the truth.

This fact was underscored by last week’s State Department Inspector General report. The report explains why, contrary to her arguments up to now, her actions were unprecedented, undertaken without the required permission, and violated State Department rules for complying with open records laws.

The report also shows that Clinton did this for the sake of privacy, not just convenience. In a previously unreleased email, she tells top aide Huma Abedin that she doesn’t want “any risk of the personal being accessible.” At the very least, this seems to hint that the by poring over Abedin’s emails, State IG found a work-related Clinton email that she hadn’t handed over. In fact, he seems to have found at least three and possibly several more, which raises still further questions about Clinton’s truthfulness in claiming to have handed over all work-related emails.

The situation is bad enough that now even Bernie Sanders, who previously claimed not to care, is treating it as a real issue.

Between Trump’s odd candidacy (he spent the latter part of Memorial Day complaining on Twitter about the judge in his fraud trial) and Clinton’s character problem, Americans seem rather depressed about the shape of this year’s election. An AP poll found that only 23 percent are excited, and only 13 percent are proud of how the primaries played out.

The AP story on the poll appropriately describes the condition as “malaise.” And when you think about it, the relentless negativity that everyone expects hasn’t even started yet.