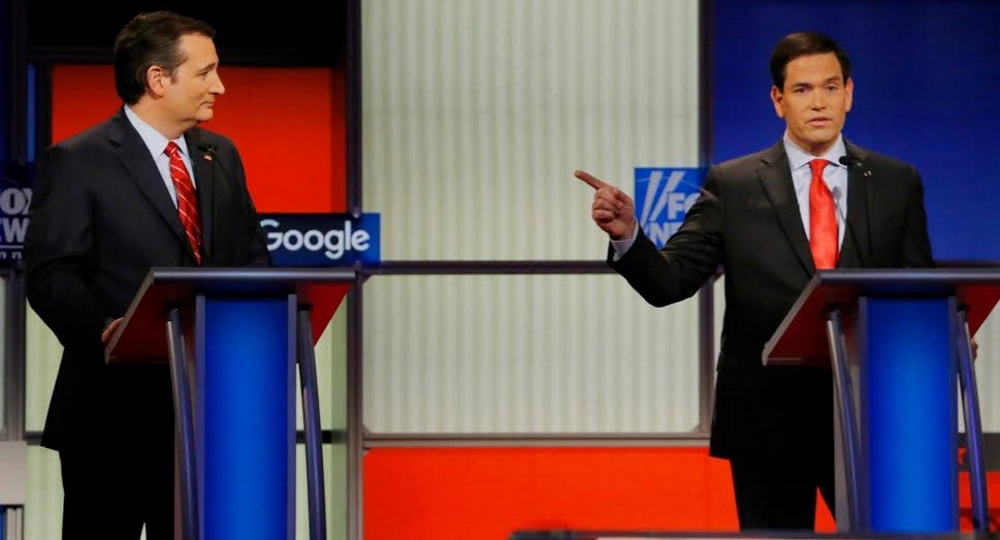 To: Our Readers
This week:

Thanks in part to Donald Trump‘s decision to boycott the only Iowa GOP presidential debate, the outcome of the caucuses tonight remains in doubt. There are late polls suggesting a tightening three-way race between Trump, Ted Cruz, and Marco Rubio. One of them, which excluded respondents who don’t know where their caucus site is, suggests something close to a three-way tie (20%-19%-19%). Another more conventional poll by a reputable pollster (Marist, for the Wall Street Journal) shows Trump 32, Cruz 25, and Rubio 18, which at the very least hints at a sharp late movement in the Florida senator’s direction.

But let’s face it — Trump’s utter lack of an Iowa ground organization is the only reason his victory in Iowa wasn’t already a foregone conclusion. If not for this, the other candidates would probably have given up by now.

In terms of raw numbers, Trump seems to have enough supporters out there to checkmate the GOP now and in the future — not a majority of the party, but certainly enough to change its course.

Trump’s candidacy has revealed an enormous fissure in the GOP. Can it be fixed? Is there any way to put the party back together again?

Whatever happens tonight at the caucuses across Iowa’s 99 counties, the Republican Party has an awkward moment coming up. It could come as soon as tonight — especially if Trump has a decisive victory or an unexpectedly brutal defeat. The day of reckoning will most likely be delayed at least a bit if he wins or loses narrowly, both more likely outcomes.

Either way, the day will come when the Republican Party has to figure out what exactly it is.

Prior to 2015, the answer seemed fairly clear. There had been a time when the Republican Party was the antislavery party. Later, it was the party of the country club and the Chamber of Commerce. Later, it was taken over by ethnic and staunchly anticommunist social conservatives .

With the rise of Ronald Reagan and the 1994 revolution, the GOP finally became a more ideologically coherent party. Even so, it was made up of loosely affiliated factions with related interests, who came together around a common set of ideas. There were always important differences between the factions that made up the Reagan coalition, and perhaps these differences best explain what is happening now.

As recently as 2014, the differences among conservatives seemed less obvious to the casual observer than the similarities. This remained true even during the very tumultuous and bitter intraparty fight over the 2013 government shutdown. As long as the GOP was divided between the true believers of conservatism and an establishment that just didn’t want to take those ideals quite as seriously, it was still a philosophically united party. The divisions were over second-order questions of courage or tactics, but everyone shared the same stated goal. Republicans still spoke the same language, but some spoke it more loudly (or as others might put it, more loudly).

Trump, on the other hand, has created a conflict within the party that is completely different from that “Tea Party versus Establishment” conflict. He has found a major fissure in modern conservatism and he is trying to widen it, breaking up the existing movement and perhaps reshaping it into something new.

If he succeeds, he will have demonstrated that the differences among various kinds of conservatives were much greater and more important than most anyone thought. Specifically, he will have shown the appetite for immigration restrictionism is strong enough to override all other conservative ideals — those involving religious traditions, the right to life, gun rights, foreign policy, personal liberty, economic and trade policy, tax policy, etc.

One way to illustrate this is to look at Ann Coulter’s famous comment after Trump’s campaign released its immigration white paper: “I don’t care if @realDonaldTrump wants to perform abortions in White House after this immigration policy paper.”

Surely, Coulter meant this in a tongue-in-cheek way. But still, it illustrates what is going on in the minds of those conservatives who are tempted by Trump. Immigration becomes a political obsession, to which all other conservative ideals — even the most important ones — are subordinated.

And that immigration issue, although it has had many conservative adherents in the past, was never really part of Ronald Reagan’s conservatism. So Trump is proposing a much larger change for the GOP than most of the mainstream media realizes, because it understands conservatism poorly, routinely assuming that actual conservative movements like the Tea Party are racist and xenophobic.

But if Trump is right, then when the many factions within conservatism are turned against each other, the passion that a plurality of Republicans can still agree on is hostility toward illegal (and/or legal) immigration.

Trump has an ace up his sleeve as he works to fracture conservatism. A significant number of Trump’s followers — perhaps even a majority — come from outside of it. Trump’s project is not merely to break up conservatism, but to take a chunk from it and weld it to a number of other politically homeless constituencies who make up the core of his following — Trump-celebrity followerism, trade skepticism, white nationalism, birther conspiracism, simple cynicism about politics, and a few other, smaller such -isms.

Can such a thing be done? No one has ever come as close as Trump has this cycle. But part one of the answer comes tonight, when Iowans decide.

More important than the question of whether it is possible is what form the Republican Party will take if it succeeds or fails. The answer to the question, and even the correct question itself, depend on what happens tonight and in the primaries that follow.

Let’s say the caucus-goers pick Trump overwhelmingly and he goes on to become the nominee. The question then becomes whether the rest of the conservative movement goes along with this major ideological change, or whether they will refuse to give up control of the Republican Party without a fight. And if they resist, what form will their resistance take? Will they wait until Trump loses the general election? Will they put forward a third-party or independent candidacy against him? Will traditional conservatism just become another small faction in the party, or will the conservatives reassert control at some later date?

On the other hand, let’s say Trump is crushed — he surprisingly finishes third tonight behind Cruz and Rubio, and his support elsewhere suddenly vanishes as the wheels come off the bandwagon.

In that event, what happens to all of his supporters? Sure, some never voted before, and many of those will go back to political non-participation. But can any of them be persuaded to stay involved? Would any of them want to support a Cruz or Rubio candidacy for the presidency? (There are hints that some might, as a recent poll suggests that a combined 37 percent of Trump supporters have Cruz or Rubio as their second choice.)

And what about the Trumpists who used to think of themselves as American-style conservatives — people who were persuaded to back Trump because they listened to too much Sean Hannity, Mark Levin, or Laura Ingraham? Will these go back to conservatism? Or will their experience in this new movement lead them instead to the ranks of alt-right and white nationalist organizations?

The harder questions emerge if Trump wins — the easier but still thorny ones if he loses. How do you hold together a coalition that formed long ago under different circumstances? How do you bring together a party for the general election that is having a true ideological war in the primary — with serious doctrinal differences that are of kind, not just of degree?