Trump’s downfall? Last week, Reuters came out with the latest installment of its rolling poll. It’s latest sample of 254 likely GOP voters nationwide (7-point margin of error) showed Donald Trump suddenly leaping to 42 percent, apparently on the heels of his Saturday Night Live appearance. And yes, that would make it an extreme outlier, nearly doubling up the support that Trump still maintains in most other polls.

Naturally, Trump has been quick to tout this poll. His lead in the polls often seems to be his best argument for his candidacy.

We recommend instead that you sell your stock in him now, for a number of reasons. The primary reason is the Paris attacks. We believe they will harden some of his supporters who view his anti-immigrant message as the answer, but it is more likely to set off a flight to quality (or seriousness) in the GOP nomination process. When Islamic terrorists murder more than a hundred people, it serves as a reminder that the American presidency is not a joking matter.

But the main reason we expect Trump to continue his stagnation in the more reliable polling is that before those attacks occurred, Trump did something more amazing and more Trumpian than he had done at any point before, once again showing his fondness for ignoring the conventional rules of the campaign trail.

As often as predictions of his demise have proven wrong, we view Trump as having already reached his peak, and believe that despite his seeming invincibility until recently, it will probably come back to bite him, at least ending his rise permanently and perhaps even causing him to lose support. You can watch it if you like — nine solid minutes of Trump riffing on Ben Carson‘s recollections in his own memoir of his anger problems in his youth (which he later overcame to become a world-class brain surgeon).

Carson has led in some recent polls, and at one point led in the RealClearPolitics average. He has led more consistently in polls some crucial states. But it’s worth pointing out that even those Republican primary voters who do not plan to support him have a highly favorable view of him. So does the public at large. The fav/unfav numbers from the most recent Quinnipiac poll are typical of what you’ll find in recent surveys– Carson has the highest net favorability among Republicans (an astounding +76) and the highest among all registered voters (+24) as well: 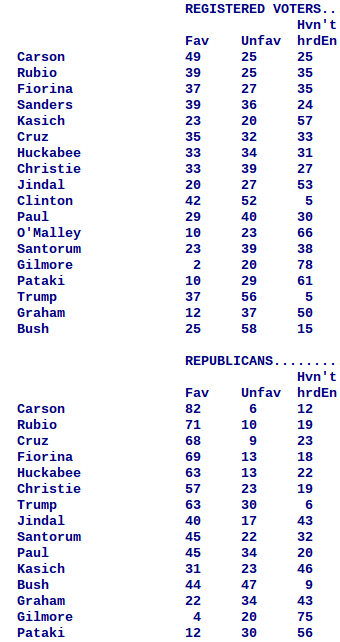 Carson’s numbers are only likely to improve after the recent attempt to chop him down with a botched story asserting his memoir is filled with fabrications. Consider this as you think about Trump’s nine-minute tirade about Carson. It was baffling to watch, not only because it was so characteristic of Trump, but also because it was so obviously not in Trump’s interest.

Negative campaigning works, but there are important caveats associated with it.

Rule number one is that negativity always redounds on the attacker in at least some small way. Negative attacks hurt not only the target but the attacker as well. This is the reason you will notice, in many races, that more desperate candidates with less to lose are the most likely to run negative ads themselves. Winning campaigns tend to stay positive as much as possible and let others — SuperPACs or party committees usually — take care of the negative advertising for them so that it doesn’t directly tarnish their candidate.

Rule number two is that the self-harm from a negative attack is directly proportional to the popularity of its target. If you attack Mother Teresa, you only hurt yourself. By the same token, a public figure or candidate with high unfavorables (say, Jeb Bush) is an easy target. To cite a non-Trump example, Matt Bevin recently won his Kentucky governor’s race in part by attacking President Obama and repeatedly tying Obama to his opponent, Jack Conway. Smart move — Obama’ fav/unfav percentages in the Bluegrass State were 35/60 in the last poll taken before the election. Bevin did minimal damage to himself despite all the negativity, and he drove up his opponent’s unfavorables.

Rule number three is that the self-harm from a negative attack is also directly proportional to the level of the attack’s negativity. When you go nuclear, you risk dying in the blast. There are several classic examples of this from recent years. The Aqua Buddha ad is more famous, but this one from Tennessee in 2010 is better because the charges it made — even against a not-super-popular opponent — were just so over-the-top. (Even though they were mostly true!)

Trump’s attack last week broke all of these rules. First, Trump launched it himself, in person, from his own mouth. It wasn’t just an allusion or reference disparaging of Carson, but a lengthy and sneering monologue about him. Second,  Carson is the most favorably viewed candidate in the GOP field, as noted above. Third, the charges of psychopathy, the references to child molestation, the mocking assertions that Carson is an unhinged lunatic and/or liar — well, it just doesn’t get any more nuclear than that.

So far, the attack seems to have made Trump seem petty and ugly, whereas Carson’s calm and patient response has made him seem more attractive. In CarsonWorld, they’re pretty sure Trump is setting himself on fire and they don’t want to do anything to stop him. Meanwhile, there are good reasons to doubt that attacks on Carson can help Trump much. His less devoted followers — the lowest hanging fruit to be picked — are probably the ones that will go on to back conventional candidates rather than Trump.

There haven’t been any new conventional polls released since last week. Perhaps Trump will somehow defy gravity once again and this mean-spirited attack on a beloved figure will cause him to skyrocket. What is more likely to happen, though, is that Trump will lose a small amount of support and linger in the low 20s, perhaps behind Carson, until more conventional politicians drop out and he is overtaken by Ted Cruz, Marco Rubio, or both.

Meanwhile, the question remains whether Carson will continue to pose a threat to Trump or whether his supporters will move on. If they move on, Trump has probably ensured they will be less likely to move in his direction.

Dem Debate: Democrats successfully hid their second debate, a milestone on the road to Hillary Clinton‘s nomination, by holding it opposite fifth-ranked Iowa’s barn-burner against the University of Minnesota. The debate attracted only 8.5 million viewers on broadcast CBS television — a bit more than half as many viewers as the Republicans’ recent Fox Business debate, which was on an obscure cable channel.

Part of this is surely a reflection of how uncompetitive the Democratic primary was already, but part of this was by design from the beginning. Nine months ago, when it seemed Clinton was on her way to a coronation and no one was talking about her honesty, there was never any desire at the DNC to give her any black eyes before she won the nomination.

Along those lines, the next Democratic debate will be on the Saturday night before Christmas, which also happens to be the first weekend after the release of the new Star Wars movie.

Not that it matters much, because Clinton’s only credible opponent — Bernie Sanders — showed once again that he just isn’t in it to win it. Instead of using Clinton’s scandals against her and pointing out the enormous distraction they will likely cause next year for Democrats, Sanders chickened out once again.

There were a couple of interesting answers given in this debate. One that caused immediate consternation was Clinton’s defense of all of her Wall Street donations. She noted that it was a reflection of gratitude for her excellent representation of that area in the Senate when 9/11 happened. Really.

The other noteworthy segment of the debate came as a result of the 11/13 terrorist attacks in Paris. Clinton was able to take the non-controversial position that the U.S. should not shoulder the main burden in fighting ISIS. But she was hit with a sharp question on Libya. Her answer about Libya, as in the first debate, consisted of slightly less bombastic boasting about how well things have gone there. “The Libyans turned out for one of the most successful Arab elections that any Arab country has had,” she said. “They elected moderate leaders.” She then just barely acknowledged there has been “turmoil” since then. (Libya is, of course, in total anarchy today.)

Bernie Sanders gave the most amusing answer of the night when he said that climate change is America’s greatest national security threat.

Meanwhile, moderators failed to ask questions that probably would have come to them easily, had they been quizzing Republicans. Given that single-payer health care was discussed, it seems like a glaring omission that Sanders was not asked about why his state abandoned its ambitious plan for single-payer (basically because the state’s Democratic leaders realized it would require a 100 percent tax increase).

And given that the Department of Veterans Affairs was mentioned during the event, it’s hard to imagine why Clinton was not asked about her recent remark that the VA scandal (which implicated officials at more than 100 VA facilities) was “not widespread” and basically nothing more than an overblown partisan witch-hunt by Republicans.

But only Republican debates are supposed to be cage-matches, so, of course.

Louisiana: If you’re looking for a silver lining for David Vitter in next Saturday’s runoff, we certainly haven’t found it yet. Various polls have him trailing by double digits. Perhaps there is a mysterious polling effect going on here and it’s just that no one wants to admit they’re voting for him. But one cannot make optimistic predictions based on such remote possibilities. Likely Democratic Takeover.