The first real numbers we will see for the 2016 Presidential Nomination are in Iowa on February 1, 2016. Most people know that Iowa uses a caucus system, but probably few know how many votes are expected to be cast in the Republican Caucus. In 2008, there 118,696 votes cast in the Iowa caucuses. In 2012, it was 121,590. For comparison, in an Iowa gubernatorial election, expect 1.1 million votes to be cast. In a presidential general election, there are roughly 1.5 million votes to be cast. A small number of people will be voting in the Iowa Caucuses. Turnout is about 5-6% of the voting population. This has a major impact on the race and helps candidates who can turnout motivated voters on a cold winter night in early February.

Sometimes, the Iowa caucus winner becomes the nominee, and sometimes, he/she doesn’t. In 1996, Bob Dole narrowly won the Iowa Caucuses with 26% over Pat Buchanan and Lamar Alexander in a nine candidate race. There were 5 participants that year. In 2000, George W Bush won Iowa with a plurality of 40% by 10% over Steve Forbes in a six candidate race. In 2008, Mike Huckabee won with a plurality of 34% (by 9%) over Mitt Romney, Fred Thompson, and the eventual nominee John McCain who did not really contest Iowa. That was an 8 candidate race. In 2012, Rick Santorum won narrowly over Mitt Romney (both 24%) and Ron Paul (21%) in an 11 candidate race.  The worst a candidate has done here since 1996 while still going on to win the nomination was John McCain in 2008, who received 13.11% without competing in the state.  While pundits are quick to say that you don’t have to win Iowa to be the nominee, it’s best to finish in the top three or four to get a ticket to New Hampshire and South Carolina.

In 2012, Rick Santorum was the “religious conservative” candidate with traction. Santorum outmaneuvered Michele Bachmann and others to become the “religious conservative” candidate here in 2012. Romney was the “establishment” candidate with traction. Ron Paul was the “outsider” candidate who specialized in caucus organization. Gingrich and Perry also got their share of votes but finished in the back of the pack. They worked to try to be the alternative “not Romney” candidate to appeal to conservatives but were not successful.  In the end, no candidate received 25% of the vote, but Santorum, Romney, and Paul, combined for 70.46% of the vote. Of the rest, most went to Gingrich (13.29%) or Perry (10.33%).

Counties won by Rick Perry in Black. County in Yellow was tied (Paul/Santorum) 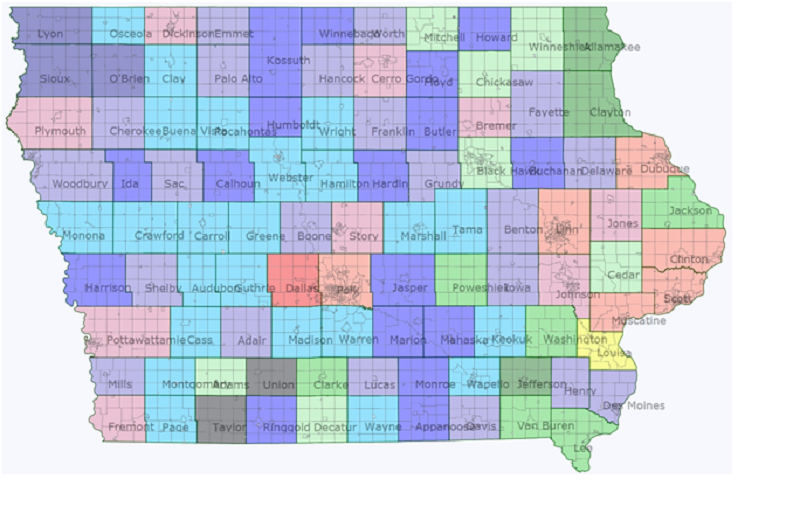 It will be interesting if the same patterns emerge in Iowa in 2016. Those light blue counties, light green counties, and pale violet red counties were close and could flip to a different type of candidate based on turnouts alone. There will likely be one main Evangelical Candidate and one main “Establishment” candidate. There will also be at least one outsider candidate that gains traction.

Organization is probably the biggest key in which candidate emerges as the favorite of their respective wing of the party. Crossover appeal among different wings of Iowa Republicans will be key as to which candidate wins in the end.  Less than 150,000 voters will be making decisions at a caucus, so do not expect a high turnout or a 1996 New Hampshire style of populist revolt from disaffected voters. That is more apt to happen in a primary than in a caucus. Longtime party Republicans will be making decisions there, and look for the most organized ground campaigns to do best.

Caucuses tend to be more “momentum-proof” than primaries, so at this stage it is better to look at organizational strength on the ground in Iowa rather than which way the wind is blowing in current polling.