NBC political analyst Chuck Todd isn’t pulling any punches when it comes to the reality of Obama’s negative impact on the electoral bids of his fellow Democrats, reports Newsmax.

Todd explained in a recent MSNBC interview, “He’s on the precipice of doing Jimmy Carter-like damage to the Democratic brand on foreign policy.” He continued:

“[But] it’s not just him. It’s actually impacting the entire party. We did some issue testing between, you know, who handles which issues – Democrats, Republicans. We took out Obama. Republicans lead by 38 points on the issue of ensuring a strong defense”

Obama’s numbers continue to dive with as much as 62% of voters disapproving of his job performance. And the utter about-face on responding to the ISIS threat likely is explained more by the polling numbers and less by a supposed change of heart on the threat of terrorism.

Whether Obama’s newfound aggressiveness on foreign policy will appreciably affect his polling and therefore have any down-ticket bump in the November elections remains to be seen. 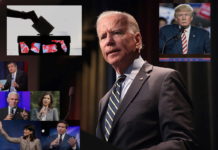