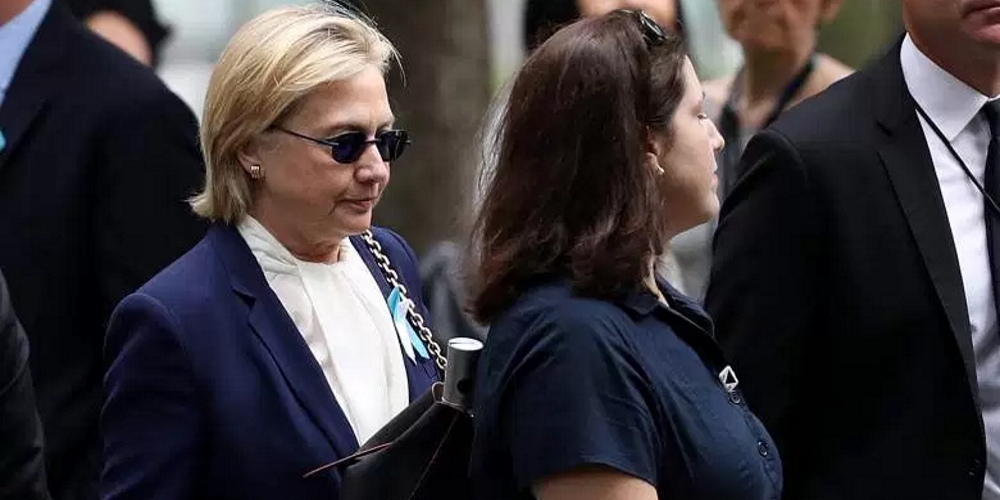 Yes, you may have noticed that all three bullet points above pertain to just one of the two candidates. That’s because the other one, for once, is finally seeing a few key things go his way.

Last week, we looked at the damning report that the FBI released on its investigation of Hillary Clinton. Here’s evidence that on top of everything else related to her emails, Clinton had lied to the FBI — unless, of course, she really didn’t know any of the basic concepts involved in doing her job, such as the classification of information.

But things wouldn’t get any worse for her after that, would they? It turns out she’s having a pretty rough month — one that could get worse if she cracks under pressure in the debates.

It was pretty obvious from the complaints of Clinton supporters that she did poorly in last Wednesday’s commander-in-chief forum, an event that allowed veterans to ask questions of the two major-party candidates. Her worst moment, of course, came when a veteran who had worked handling classified information pointed out that he’d be in prison if he’d done what she did with her emails.

The biggest problem for Clintonworld is that although Trump wasn’t necessarily stellar in the forum himself, Clinton was unable to get traction with a story about how he’d bombed horribly and demonstrated himself unfit for office.

One solution to this problem was to have Clinton hold a press conference the following morning. Because it was her first in nine months, it consumed a lot of oxygen, changing the story and giving the networks a lot of material to cover instead of focusing on her performance the night before. It was a clever move.

But Clinton’s team also took another angle. They assailed the moderator, Matt Lauer, for hitting her with hard questions and cutting offer her lengthy, filibuster-y answers. Of course, Lauer was pretty hard on Trump as well, so that’s pretty easy to dismiss. The real issue is that Clinton’s team is trying to game the refs ahead of the presidential debates, which begin later this month. If they can intimidate the moderators now and threaten to turn them into the next Candy Crowley, it might subtly affect how the debates go and how they are perceived.

One of the reasons Trump gets away with saying so many things that other politicians cannot is that he simply never (or almost never) apologizes for anything. This really sets him apart. It changes the expectations whenever you hear him speak. If he has a gaffe, he just rolls through it where others tend to let it take them off the rails.

Hillary Clinton had one of these moments on Friday when she declared that half of Donald Trump’s supporters are “a basket of deplorables.” She was at a fundraiser, and in the midst of flogging one of her campaign’s less effective attack lines, which she first went to several weeks ago, playing up the existence of Trump’s racist supporters in the so-called “alt-right.”

“To just be grossly generalistic,” she said, “you can put half of Trump supporters into what I call ‘the basket of deplorables.’ Right? Racist, sexist, homophobic, xenophobic, Islamaphobic, you name it. And unfortunately, there are people like that and he has lifted them up….Now some of those folks, they are irredeemable. But they are not America.”

This particular remark, given that it suggested half of Trump’s support comes from such people and that a large segment of the voters is “irredeemable,” arguably went too far, at least by conventional politician standards. After all, ever since the convention Clinton has been trying to carve out a majority or a large plurality vote by appealing to disaffected Republicans, some of whom are deciding whether they can pull the lever for Trump. This contradicts that strategy — it’s the kind of statement that hardens people in their partisan ways.

Clinton was ultimately forced to apologize after Trump’s side framed the remarks as an example of elite liberal disdain for working class Americans. Mike Pence gave the best direct (and conventional) response: “The truth of the matter is that the men and women who support Donald Trump’s campaign are hard-working Americans, farmers, coal miners, teachers, veterans, members of our law enforcement community, members of every class of this country who know that we can make America great again,” he said. (Trump handled it differently, going to ALL CAPS on Twitter.)

What’s incredible is that suddenly, Trump has Clinton on her heels for a controversial remark she made. It’s one more thing among many that’s gone wrong for her in the last two weeks.

Certain Republicans — usually the ones more aligned with Trump — have been trying to spread a lot of rumors about Hillary Clinton’s health. To be sure, she does have at least one medical problem (a thyroid condition) that everyone knew about before this week. But we’re not supposed to honor the perennial health scare tactic, right? Recall that this was used against President Reagan in 1984 (to no avail) and John McCain in 2008 (it probably didn’t have much effect), among others. But in Clinton’s case, there didn’t seem to be any reason to believe this stuff.

>Sure, people had been joking about her age for some months, but that was when Republicans expected to nominate someone substantially younger. Which they didn’t.

>But last week, Clinton had a massive coughing fit while delivering a speech. She made an effective joke of it, claiming that all talk of Trump made her allergic, but it was a scary moment for her campaign.

Scary enough that her people allowed her to attend a 9/11 commemoration ceremony. And then the worst happened — she collapsed in public.

The campaign’s initial reaction was to blame the temperature (it was the coolest day in New York City in a month), but that wasn’t going to fly. A public collapse immediately adds validity to every health rumor out there, true or false. After all, Clinton has a history of this — she fainted and sustained a concussion previously, a fact that formed part of the basis of all the health rumors in the first place. That incident, which supposedly also involved dehydration, sounds disturbingly familiar now.

Ultimately, the campaign was forced to issue a statement from her doctor — Clinton had been diagnosed last Friday with pneumonia, and was “recovering nicely” after collapsing in public.

What does it all mean? Pneumonia is a pretty serious condition — a temporary one, yes, but it’s the sort of thing that should probably take a candidate off the trail for a few days once diagnosed. Yet Clinton was there on Sunday. And that’s the most interesting fact of all.

It signifies that the health rumor-mongering up to now has really gotten under the skin of Clinton’s campaign team. Were they worried that people would speculate further about her health if she’d skipped the event, perhaps?

The coverup is always worse than the crime. In this case, the attempt to keep up appearances while suffering from an acute respiratory illness backfired, big time. Now there’s really a health issue, and it’s a big enough deal that the 9/11 anniversary was not dominated by coverage of Trump’s past flings with truther conspiracy-theorism. Now people are legitimately wondering if Clinton is healthy enough for the job of the presidency — not just Republicans and conservatives, but a lot of people with mushier ideas about ideology.