The feud with Donald Trump and Ted Cruz over their spouses just won’t go away.

“Donald Trump has intensified his feud with Ted Cruz over the Republican presidential rival’s wife after she slammed his statements for having “no basis in reality.”

Trump shared an image on Twitter around midnight Wednesday comparing his wife, Melania, a former model, to Cruz’s wife, stating, “A picture is worth a thousand words.”

“Donald, real men don’t attack women. Your wife is lovely, and Heidi is the love of my life,” Cruz responded in a tweet of his own.The retweet from Trump set off a firestorm, drawing a one word response from another woman who has feuded publicly with the billionaire.

CNN’s Kate Bolduan sparred with a Trump adviser over the tweet during an interview Thursday, calling it “demeaning to women.” 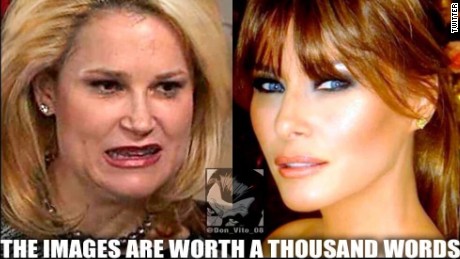