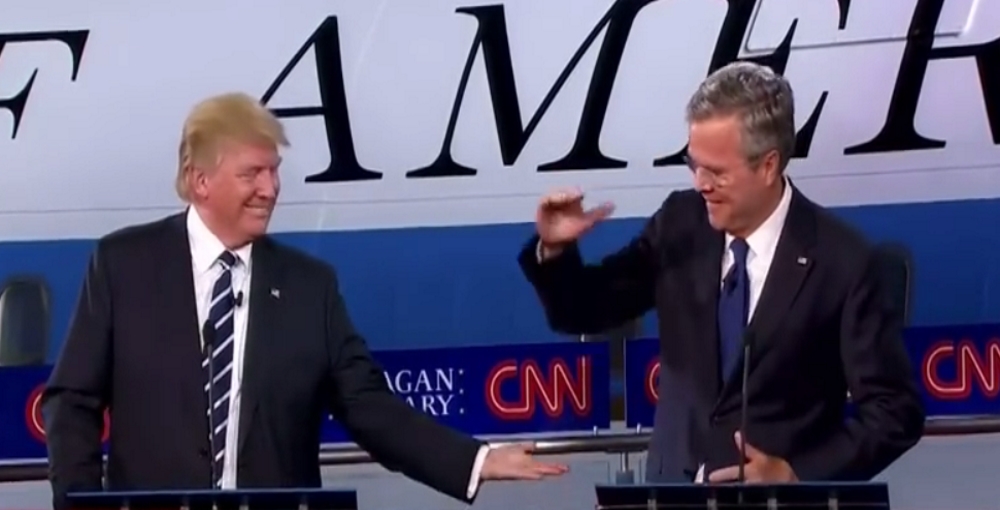 Iowa caucuses: Just a week left, and many of the leading lights of punditry are now convinced that Donald Trump is going to win in Iowa. The polls bear this out — although even now it is worth noting that last-minute surges in Iowa are the rule rather than the exception, and polls even just one week away from the election don’t tend to be predictive.

The odd thing is that establishment GOP hatred of Ted Cruz is so intense that leading establishment figures are now speaking as though they view a Trump victory as the best possible outcome at this point. It’s somewhat ironic, given Trump’s iconoclastic style, even if it fits Trump’s actual not-very-conservative ideology.

The various establishment players participating in this tomfoolery come at it from a few different angles. Perhaps they are working together, perhaps they aren’t. Although some anti-Trump conservatives view this as a conspiracy, it is sufficient to note what is actually happening in plain view and contributing to a possible Trump nomination.

On the one side, establishment Senate Republicans, past and present, are leaping in to say nice things about Trump, whom they should be shunning with crucifix and silver stake. But the fact is, Republicans like Orrin Hatch and Bob Dole and Richard Burr dislike Ted Cruz more than anything else in the known universe. And they have their personal reasons, sure. But their newfound Trump bromance seems like a case of hatred overriding rationality.  In reality, Cruz is unlikely to get the nomination even if he wins Iowa. Trump. on the other hand, could well prove unstoppable if he wins there.

The other group that has come to Trump’s aid is the Jeb Bush camp. As Robert Tracinski put it at The Federalist: “Jeb’s only chance, and his actual strategy, is that somehow every other alternative to Trump will implode, leaving Jeb as the only sane choice.” Or better, as Jeb SuperPAC strategist Mike Murphy put it, “I’d love a two-way race with Trump at the end.” This seems to be precisely what Murphy is trying to arrange. Begin with the token Jeb effort against Trump in Iowa — the billboard that quotes Jeb Bush saying that Trump is unhinged. If this isn’t designed to get Trump’s vote out, then nothing ever was. Jeb’s unfavorables are among the only ones that rival Trump’s, and Trump has gotten more mileage bashing Jeb than doing anything else in his entire campaign.

Murphy’s pro-Jeb organization, Right to Rise, is by now best known for proving that money can’t buy elections. But its pounding of Marco Rubio in Iowa — a state where Bush isn’t even pretending to compete at this point — demonstrates amply what’s going on. Jeb puts up token resistance to Trump in his rhetoric, but his money is aimed at derailing Rubio early, which of course helps Trump win Iowa.

So one group of old bull lawmakers goes after Cruz. Jeb’s money goes after Rubio. Only after Trump wins Iowa does the GOP establishment realize it has created a monster it can’t control. This puts the GOP on the verge of an ideologically and politically destructive Trump victory.

Iowa voter engagement: So what will happen to Trump in Iowa next week?

Given the common claim that Trump is bringing all kinds of new voters into the process, a look at voter registration in Iowa (courtesy of Iowa’s Secretary of State) would probably be helpful. 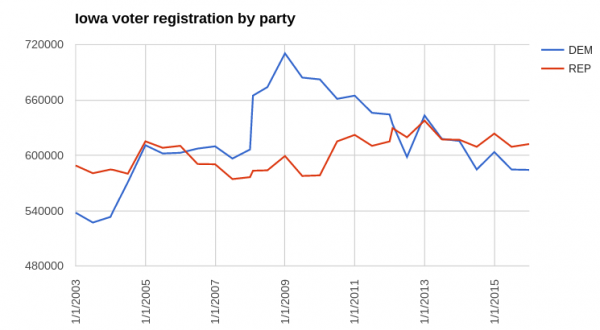 This chart runs up through New Year’s Day. The first thing you will notice is that there has been no big uptick in voters affiliating with the GOP in preparation for the caucuses. But the second thing you’ll notice is that it’s probably unreasonable to expect one. It doesn’t appear that this happened ahead of other caucuses either, at least not for the Republicans.

In each presidential year, the big (or not-so-big) move seems to happen on caucus night itself, when voters re-affiliate and the statistics show up in the numbers for the following month. (In 2008 and 2012, as with this year, that means they reaffiliated in January and it showed up in February). The larger jumps in registration seem to come with general elections, when the parties ramp up their efforts to get like-minded voters to the polls.

For campaigns in a hotly contested primary, voter registration is kind of a sucker’s game. New voters are far less likely to turn out for primaries (let alone caucuses), so why not just focus on contacting and winning the votes of those already registered with a history of turning out?

The third thing that stands out (or perhaps the first thing, because it’s the most distinctive feature of the graph) is the Democratic registration figures that jump out at the beginning of February 2008, the month after Obama won the caucus. The result suggests that nearly 60,000 voters reaffiliated as Democrats in order to participate in that lively caucus, the lion’s share going for Barack Obama. There was a corresponding drop of roughly 50,000 registered unaffiliated voters, plus a tiny uptick on the Republican side.

In all, about 17,000 new voters registered for the caucus itself — 10,000 for the Democrats, 7,000 for the GOP. In total, 240,000 participated in the Democratic caucus and 119,200 in the GOP caucus. And some part of that has to do with voters coming of age (anyone who will be 18 in time for the general election can caucus). So even a data-savvy Obama campaign was not able to do that much relatively speaking in terms of getting completely new and previously unregistered voters involved.

It is significant that that Democratic primary brought in about 10,000 new voters, but that’s clearly the exception. And even taking the Obama phenomenon into account, newly registered voters — or at least, net newly registered voters — historically play just a small role in the Iowa caucuses, not even in the two elections since Iowa adopted same-day voter registration in 2007.

So what does this tell us about 2016? A couple of things. One is that there isn’t proof yet that Trump’s task is impossible. The other is that Trump has a huge challenge ahead of him, one that very few have surmounted in modern times. Trump has poll numbers, but he has almost no organization on the ground in Iowa that can convert them into the sort of rare win that Obama obtained. Can he do it anyway?

In sharp contrast to Obama, Trump has captains for only a small fraction of Iowa’s 1600 precincts (it was less than 10 percent as of a few weeks ago), and most of those captains have themselves never even caucused before, which puts them at an even greater disadvantage. He also has a very modest data operation compared to what Obama had. Basically, what Trump needs is for tens of thousands of Iowans to break all the rules of what has happened in caucuses — and especially in Republican caucuses — during the 21st Century.

Can it happen? Well, Trump has broken many rules of politics so far, surviving in the polls what would kill most candidates dead. But polls are not real life. If Trump pulls it off in Iowa, it will be the first time he has actually succeeded in a real-world test. This is terra incognita, unless it isn’t. It will be fascinating to see what happens.