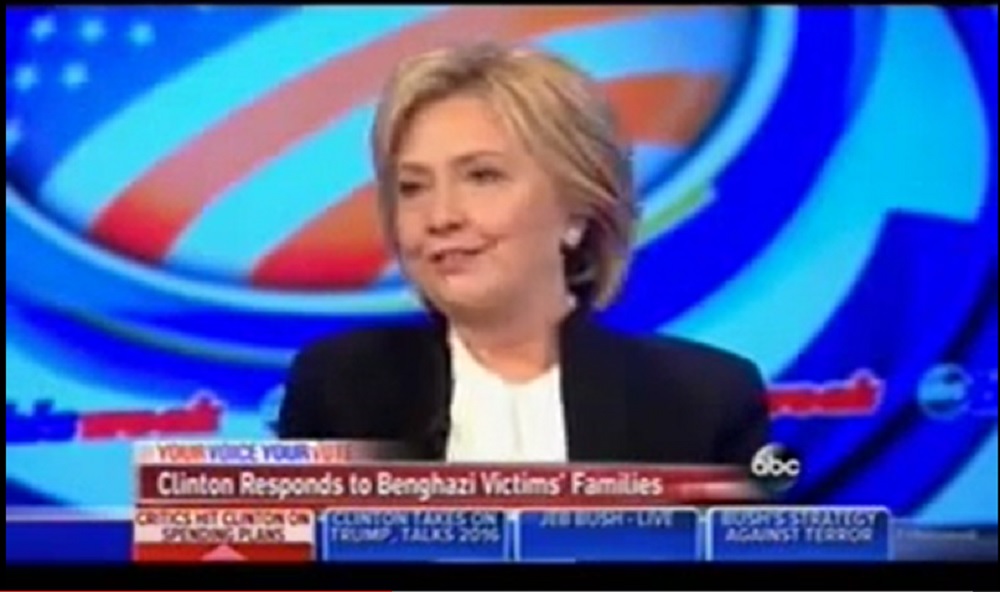 Former Secretary of State Hillary Clinton is under fire for calling the families of the four dead Americans in Benghazi liars.

Clinton claims she never blamed the incident on a YouTube video while talking with families, but they remember otherwise.

“Four different relatives of three separate victims have publicly shared that recollection, including one who jotted down notes shortly after the meeting:

“I gave Hillary a hug and shook her hand. And she said ‘we are going to have the film maker arrested who was responsible for the death of your son,'” recalls Tyrone Woods’ father, reading directly from his written record from that day. Sean Smith’s mother and uncle remember the same thing, as does Glen Doherty’s sister.

Now watch Hillary’s performance from this past Sunday.

STEPHANOPOULOS: “Did you tell them it was about the film? And what’s your response?”

CLINTON: “No. You know, look I understand the continuing grief at the loss that parents experienced with the loss of these four brave Americans. And I did testify, as you know, for 11 hours. And I answered all of these questions. Now, I can’t — I can’t help it the people think there has to be something else there. I said very clearly there had been a terrorist group, uh, that had taken responsibility on Facebook, um, between the time that, uh, I – you know, when I talked to my daughter, that was the latest information; we were, uh, giving it credibility. And then we learned the next day it wasn’t true. In fact, they retracted it. This was a fast-moving series of events in the fog of war and I think most Americans understand that.”