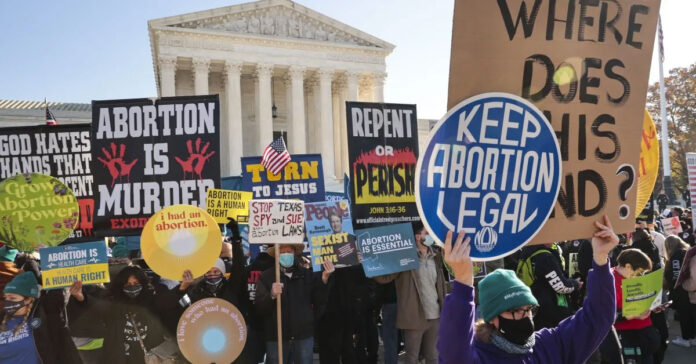 The leak of a draft Supreme Court decision overturning Roe v. Wade consumed last week’s political news in Washington DC. Conservatives hailed the draft as genuinely excellent, and were pleased to see that five of the court’s justices apparently voted for it. The decision eviscerates the idea that abortion was ever a constitutional right.

But the question here is what its political consequences will be.

Democrats are hoping that, at a time when Joe Biden and Congressional Democrats are getting crushed in most opinion polls, the possibility of Roe being overturned will awaken a sleeping giant and save the say for them. For decades now, Democrats have argued that everything will change the moment Roe is struck down — that suddenly, a pro-life position will be toxic to most voters, because it might actually have some consequences.

It is certainly too soon to draw any conclusions about this. However, there is one early data point, and a handful of recent events that are relevant by analogy.

First of all, exactly one poll has been taken and released since the draft decision was leaked on May 2. As it happens, CNN had also polled the generic congressional ballot just before the leak, and found that Republicans had a one-point advantage as of May 1. Their poll taken May 3-5, however, showed Republicans with a historic advantage of seven points — the highest-ever Republican lead in a CNN Congressional ballot poll, tied only by the results from September 1, 2010.

It is important to note that Republicans do not need to build up a large lead in congressional ballot polling in order to win big in midterm elections, based on the track record of most congressional generic ballot polls.

The other relevant fact has to do with the fact that Roe is not being suddenly destroyed all at once. The 2007 decision in Gonzales v. Carhart weakened Roe, allowing States across the nation to pass more stringent abortion laws. Republican states have been doing so ever since. And at no point since have Democrats successfully made this into an issue.

Perhaps the most dramatic example came in November 2021, when Virginia’s hotly contested gubernatorial election coincided with a massive national controversy over Texas’s new abortion law. Terry McAuliffe, the Democratic nominee, fashioned his entire campaign around the Texas law, warning that it would come to Virginia if he were to lose. In the end, voters chose his pro-life opponent. What’s more, exit polling showed, as it has in many elections over the years, that the voters most motivated by the abortion message were pro-life voters.

Thus, neither history nor current events point to an easy out for Biden and the Democrats based on the potential repeal of Roe.

This doesn’t mean it can’t happen — and it doesn’t mean that this isn’t an issue worth losing ane election over, either.

It is entirely possible that the immediacy of the threat of Roe’s disappearance will change the dynamic of the issue. But if this is going to happen, we’re going to need to see some evidence of it at some point soon. And the force of this political change will have to overcome the already powerful dynamic of Biden’s unpopularity and incumbency in a midterm election year in which redistricting did not work out especially well for Democrats.

Nevada: Having gained President Trump’s endorsement, moderate Clark County Sheriff Joe Lombardo is suddenly running away with the GOP primary, with a double digit lead over both former Sen. Dean Heller and party-switching North Las Vegas Mayor John Lee. Any of the three would be slightly favored to win over the extremely unpopular incumbent Gov. Steve Sisolak.

Pennsylvania: Retired Army Col. Doug Mastriano’s leap out to a narrow polling lead has alarmed some state Republicans, who believe that his eccentric behavior and QAnon associations will cause a down-ticket implosion, perhaps even handing Democrats the state House and Senate. This is why the Democrats’ leading gubernatorial candidate, Attorney General Josh Shapiro, ijs actually promoting Mastriano in his latest ad. But although Mastriano leads, he only stands at 20%, with a much larger number undecided. This is a race where President Trump could have helped with an endorsement to unite candidates around one alternative, but so far has chosen not to.

Alabama: Former Richard Shelby staffer Katie Britt appears to have jumped out to a sizable lead in the primary race — a double-digit lead, in fact. Although she appears unlikely to avoid a runoff, a recent poll showing her at 39% seems to cement her place in a runoff against Mike Durant. Durant had been surging until recently. Rep. Mo Brooks has completely fallen apart and sits in the low 20s. Whoever wins, this seat is almost certain to stay in Republican hands this fall.

North Carolina: With the endorsement of both the Club for Growth and President Trump, Ted Budd looks to be on his way to a convincing double-digit primary victory over former Gov. Patrick McCrory, and to supersede the 30% threshold that will allow him to avoid a runoff. He will also be favored this fall over the Democrats’ likely nominee, former state Supreme Court Chief Justice Cherie Beasley, who was ousted from office in a close 2020 election.

Ohio: As we expected, J.D. Vance entered the last stage of Ohio’s primary with all the momentum and won. The anti-Trump Matt Dolan also made a late run at it, but instead finished a close third. He failed to find his way through to a plurality in an otherwise strongly pro-Trump field.

Vance will face Rep. Tim Ryan, a formerly pro-life Democrat who now apparently plans to run on the issue of abortion, if and when the Supreme Court releases its expected ruling overturning Roe. It’s an uphill task in Ohio, where the legislature has been passing escalating restrictions on abortion for years without any noteworthy outcry.

Pennsylvania: Former Army Ranger and hedge fund manager David McCormick remains stubbornly in the thick of this race, despite President Trump’s endorsement of celebrity doctor Mehmet Oz. With two weeks to go, these two poll within the margin of error of one another in multiple polls, with each still in contention — very slight advantage Oz, whose celebrity is no doubt a turn-off for many conservative voters. Oz had Trump and J.D. Vance campaigning for him last week; McCormick has been campaigning methodically all over the state and making appearances on Fox News where possible. This one is going to be very close.

Texas-28: Jessica Cisneros is running an abortion campaign in a heavily Hispanic district that is rapidly reddening. If she succeeds in knocking off moderate and pro-life Democratic Rep. Henry Cuellar in the May 24 runoff, then this seat becomes a prime Republican pickup opportunity in the fall. Biden won less than 52% in this seat in 2020. Republicans’ runoff is between former senior Ted Cruz staffer Cassy Garcia and consultant Sandra Whitten.