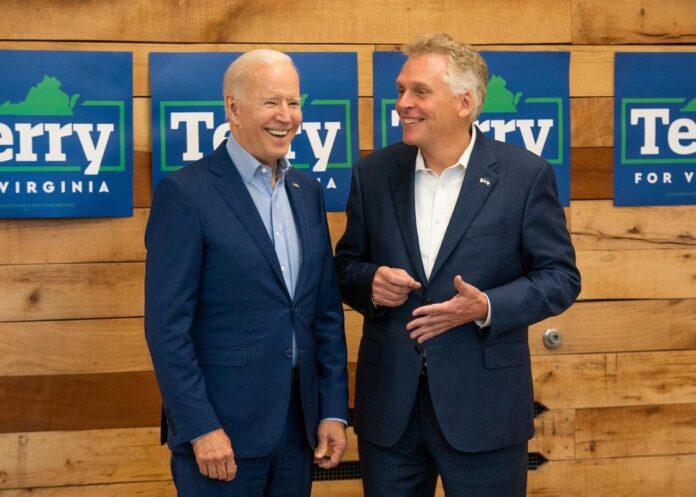 Biden spending package: Does Joe Biden have the deal he wants? As of Monday morning, it didn’t appear so.

His last-minute talks with Sen. Joe Manchin, D-W.Va., come just at the moment when Manchin wields his maximum power in Washington. He can single-handedly stop Biden’s entire agenda at this point if he wants to. He can also allow through exactly what he wants and none of what he doesn’t want. This is also occurring with a backdrop of rumors that he is about to switch parties and become a Republican. Although unlikely, such an outcome would not be impossible if Biden tries to push him too hard.

Manchin’s newfound power and importance has an expiration date. The 2022 election is almost certain to change the balance of power in Congress. At this point, a Republican takeover of one or both houses of Congress appears likely. But even if Democrats make gains, Manchin automatically becomes a far less important figure. So if there’s anything he really wants — say, pork for the home state or an appointment as ambassador to Tahiti — this is the moment to call in the favors and trade the horses.

That provides the strongest argument that Biden will end up getting a deal. On the other side, Manchin’s demands — including but not limited to restoration of the pro-life Hyde Amendment to the spending bill — may be too much for his increasingly left-wing party to accept as a condition of a deal. They may just be too far apart to get anything the Left will accept. Democrats have no margin for error because, even though many Republicans support the smaller infrastructure bill, Democrats can count on having no Republican support at all for the larger social spending bill that Biden has been pushing for under his “Build Back Better” label.

New Jersey: With everyone focused on Virginia’s gubernatorial election, this one was expected to be a real snooze-fest. But there are some late indications that it’s going to be a lot closer than anyone expected. A local media-commissioned poll by Emerson College shows Jack Ciattarelli within single digits and, when leaners are pressed, just four points behind Gov. Phil Murphy. Murphy is not especially popular right now and Democrats have reported a noteworthy lack of enthusiasm for next week’s election.

Indeed, as in 2009, when Chris Christie came seemingly out of nowhere to upset Gov. Jon Corzine, Ciattarelli has a late opportunity to capitalize on discontent with an unpopular Democratic president. Leaning Democratic retention.

Virginia: It doesn’t get much closer to this race. Both the polling and the magnitude of the parties’ last-minute effort reflects that fact.

Terry McAuliffe’s decision to go negative weeks ago reflected Democrats’ anguish over this race. His unforced error of disparaging parental involvement in their childrens’ education is important for two reasons. First, it has generated a strong attack that Republican Glenn Youngkin has been using against him to great effect. But second, it has taken the education issue, which Democrats typically dominate, and turned it against them. There could be a serious bloodbath down-ballot for Democratic delegates as a consequence, although their fresh gerrymander might spare them the worst of it.

Republicans are far more engaged and excited to vote, but it just might not be enough. Slight Republican takeover.

Florida: With his state’s coronavirus cases and deaths falling after the summer season, Gov. Ron DeSantis is offering police officers fired for refusing vaccinations a $5,000 bonus to relocate and apply to jobs in Florida. It is both good politics for a state that never embraced anti-police ideology and, at a time of labor shortages all around, good policy. This is the sort of smart play by someone thinking ahead to a possible presidential run, obviously.

New Hampshire: The news keeps getting worse for Democrats as Sen. Maggie Hassan’s bad polling from earlier was not a fluke. She remains stuck firmly in the low 40s — 42 to 44 percent — and trails Gov. Chris Sununu, R. She only leads former Sen. Kelly Ayotte, whom she narrowly defeated in 2016, by one point.

But again, the main problem she faces is that incumbents — especially incumbent senators who were previously governors — are already well-known and unlikely to gain ground from improved name recognition. Hassan has clearly upset voters in her state and the Biden administration’s ongoing train-wreck is not helping — her approval rating is upside down at 33%/51%, which is pretty bad for a politician not suffering any known scandal.

Ohio: A super-PAC supporting author J.D. Vance has produced a poll (scroll down here for the PDF) showing him within striking distance (16% to 19%) of the frontrunner in the GOP primary, former state Treasurer Josh Mandel. This comes just after Vance, a dogged supporter of both Trump and Trumpism now, was pilloried for his aversion to President Trump and his refusal to vote for him in the 2016 election. Of course, he is hardly alone there even among true conservatives, but just as Republican primary battles of ten years ago were about who really represented the “Tea Party,” so now are they really about who is the true “Trump” candidate and who will win Trump’s endorsement. That dynamic might make this open-seat race (along with North Carolina) one of the two most interesting Republican primaries of 2022.

For his part, Mandel has in recent weeks gotten himself thrown out of a school board meeting for speaking out against the teaching of racialist ideology. (It wasn’t anything bad for him — he was thrown out just for speaking as a non-resident of the area, although the rules do appear to allow him to speak.)

It was a pretty smart move by a candidate who is nonetheless a bit of an ideological chameleon — a Bush Republican through-and-through, an Iraq War vet who has adapted with the times and wholeheartedly embraced Trumpism at the most convenient moment.

Alaska-At Large: The apple sometimes falls far from the tree. Nick Begich III, the nephew of former Democratic Sen. Mark Begich and grandson of the late Democratic Rep. Nicholas Begich, turns out to be a Republican and maybe even a conservative — after all, he once worked for the Alaska Policy Forum, the state’s center-right free-market think tank.

It appears Begich will either be challenging Rep. Don Young in a primary or running for the seat if Young bows out. Young has not announced his plans, but the young Begich appears to be friendly with his staff and has hired at least one of them. So even if Begich can be trusted as a true conservative, this could be an attempt at a coronation among Alaska’s political aristocracy. Alternatively, he might be trying to establish himself as a leading candidate for future office with a trial statewide primary.