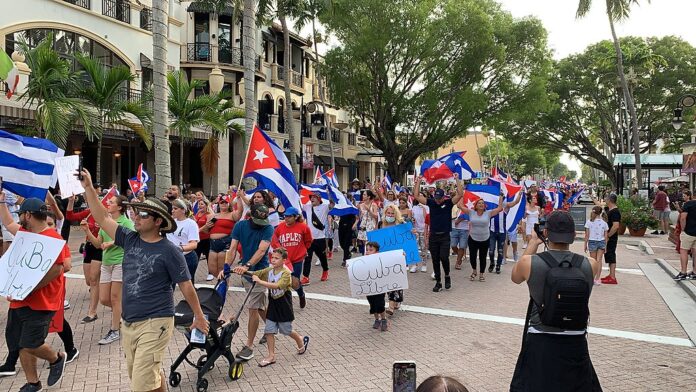 In an unprecedented show of defiance, Cubans took to the streets of many cities earlier this month to demand freedom from the Communist regime that imprisoned their island nation in 1959.

There is a long history behind Cuban repression and migration to the U.S. There is also a growing anti-Communist sentiment in an increasing number of Latin Americans migrating to the U.S. Specifically, many have recently experienced oppressive socialist governance in Cuba, Venezuela, Bolivia, Ecuador, and even in central American countries such as Nicaragua. This phenomenon is even more pronounced today, given the re-emergency of a Cold War with China the last nominally socialist superpower in the world.

Right now, Joe Biden has a problem — a problem big enough that he has launched a slick anti-Communist ad campaign in Florida. The problem is that his response to the demonstrations, and to the Cuban government’s violent suppression of the same, has been quite weak. The imposition of new sanctions against a handful of officials was a good start, perhaps, but Cuban activists want to see more. Biden might be having a moment much like the one Obama faced in 2009 in Iran. With Iran’s anti-American, theocratic government on the ropes, Obama basically let the protests and the protesters fail. The reason was that he wanted to reach a nuclear deal with the existing regime, and that would not be possible if it fell or was significantly weakened.

Biden would surely suffer much more serious political consequences if he did such a thing in Cuba — and it appears he is at least avoiding that trap. But will he do enough? So far, it doesn’t look like it. But Biden faces a squeeze here. He definitely needs to put the foot on the gas and show that his “solidarity” with Cuban protesters is more than just a show of support out of political necessity. However, the rabid far-left of his party continues to sympathize, make excuses for, and even praise Cuba’s communist regime. This was reflected in the Biden administration’s botched early response to the protests — administration officials, right off the bat, started by loudly claiming that the protests were about getting the COVID vaccine. The absurd suggestion was untenable in the long run, and the White House had to put a stop to it quickly.

But note that this is the instinct of many (although not all) Democrats. They view Cuba’s socialist healthcare system (a poor system that they nonetheless overrate and praise) as a model for the U.S.. Increasingly the Democratic Left is mainstreaming within the party the Cuban government’s affinity for censorship of unauthorized opinions on various topics.

This wing of the party can also be credited for the Biden administration’s initial messages discouraging Cubans from fleeing by sea to Florida — a policy with no justification, since it basically just sends them fleeing by sea to Mexico and then over the southern U.S. border.

Florida Follows: Now, the context for this Cuba situation highlights its unusually strong connection to U.S. politics, and specifically to politics in Florida.

After 2008 and 2012, Democrats were convinced that they were turning a corner with Florida’s traditionally Republican Cuban-American vote. President Barack Obama performed quite well with them as he carried the state — his supporters even claimed that he had won the Cuban vote.

This led to expectations — parroted by every major network on election night — that Hillary Clinton would finally clinch Florida in 2016 by dint of elevated Hispanic (both Cuban and non-Cuban) turnout. Those expectations, it turned out, were just wishful thinking. In the time since, Trump gained ground with Hispanic voters of all national origins, but one group that he really seems to have snapped onside is the Cuban vote.

President Biden managed to win the presidency without Florida in 2020, but the lack of Florida made it way too close for comfort.

Biden lost the Sunshine State by a decisive 3.4 point margin — the widest margin of loss for a Democrat since John Kerry lost it by five points in 2004.

Without Florida, Biden had to carry all of the old “Blue Wall” states just to scrape by. Yes, he managed to pad his victory with extremely narrow wins in Arizona and Georgia, making the Electoral College victory appear a bit bigger than it would have been otherwise. But these wins involved Biden taking advantage of Trump’s specific weaknesses with suburban white voters.

Despite his popular vote victory, Biden’s win was a close thing. In terms of the number of votes distributed in states that could have turned the Electoral College, Biden’s win was even narrower than Trump’s had been in 2016. Thus, it is not likely that Democrats will be able to repeat that accomplishment consistently.

Moreover, certain states — such as Michigan, Wisconsin, Maine, and Pennsylvania — appear to be gradually trending away from Democrats and back into Purple territory. This is why Florida is so important. Without it, Republicans basically cannot win the presidency, but with it, they have a lot of ways to win. Turn Florida Blue, and Democrats have a lock.

Unfortunately for Biden and any Democrat who would succeed him, turning Florida Blue sounds a lot easier than it actually is. In fact, Democrats have enjoyed very little success in Florida since the 2000 recount. Republicans now dominate the state at all levels, hold nearly every statewide office, and have an almost unanimous state Supreme Court majority, a total reversal from the Florida of the mid-1990s. What was once a very close state that mirrored the national popular vote is now a light-red Republican state that only goes Democrat in Blue tidal wave years such as 2008. Note that even the wave year of 2018 wasn’t enough to put Democrats there over the top.

Can Florida get Redder? Just imagine for a moment that Gov. Ron DeSantis becomes the Republican presidential nominee in 2024. That could take Florida right off the map. But it gets worse than that. Florida’s Democratic Party — one of the worst underperforming state parties in America — is now having trouble fielding candidates for U.S. House. Part of the reason is uncertainty based on redistricting, but another part is fear of the backlash from Biden’s bungling of the Cuba situation. Democrats already face big problems in 2022. But if Florida somehow turns into a Republican rout in 2024, Democrats are going to have a much harder time defending other states with scarce resources.

Given the results of the 2020 Census, Florida will soon have 30 electoral votes, making it even more influential in 2024 than it is now. This Cuba situation, then — and it could yet develop into a new post-Castro birth of freedom — represents some very bad timing for Biden. Like it or not, his ability to win Florida will be based not on some slick anti-Communist advertising campaign, but on the success that Cubans enjoy in overthrowing their tyrannical government. He could well be blamed for failure. He has every incentive to give this his all.

If his party’s increasingly influential Left prevents him from rooting out this last outpost of Soviet colonialism, then he will have missed an essential and unrepeatable opportunity to change his party’s fortunes.

California: The official list of candidates for the September 14 California recall election includes longtime conservative pundit Larry Elder, in addition to Caitlin Jenner and 40 others.

In the event that Democratic Gov. Gavin Newsom is indeed recalled, Elder leads the field of candidates with 16 percent support, according to a new poll. Note that Elder, a black conservative pundit who has been writing and speaking for decades now, could become governor with as small a plurality as you like — even just 20 percent of the vote, if support splits sufficiently.

Jenner, a breakthrough transgender candidate whose fundraising and celebrity profile have attracted much attention, languishes in the single digits with just 4 percent support.

Although the trend is positive for those hoping to recall him, that might not be enough. At the moment the polling points to Newsom’s survival — he has 48% to the recall’s 43%. Note that Newsom’s demise is not dependent on voters coalescing behind an alternative — the recall vote is a straight yes-or-no affair, irrespective of the votes for the various candidates.

Michigan: Former Detroit Police Chief James Craig has semi-officially joined a large Republican field to take on Gov. Gretchen Whitmer, D. His upsides will be his law-and-order brand, as well as his credibility as a non-partisan official and an African American. He already enjoys most of the Michigan state party’s support, but his politics remain somewhat unknown. He most likely will not be the Trumpiest candidate in next year’s primary — that distinction will surely belong to talk-show host Tudor Dixon — but there are no indications that he will be incompatible with Trump.

Of all the coronavirus-related political battles out there, this one and Andrew Cuomo’s re-elect battle in New York will likely be the most important. Also, the defeat of Whitmer would serve as both an important notch on the belt of Michigan’s Republican Party, and the strangling of one of the Democrats’ leading benchwarmers for a future presidential or vice-presidential run.

Despite Whitmer’s enormous financial advantage, Republicans genuinely think they can win this one. They hope to exploit Whitmer’s COVID hypocrisy and ongoing rancorous battles with the legislature over special pandemic powers.