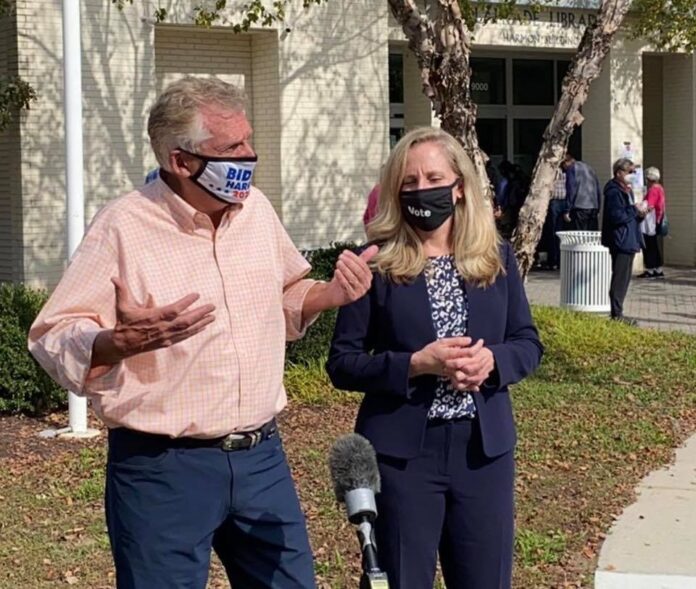 Georgia: Democrats are not satisfied with being humiliated by their lies in the debate over Georgia’s voting reform law. Instead, they have decided to litigate the matter in a court of law, where they will receive much less favorable treatment than they have in the court of public opinion.

President Joe Biden’s Justice Department is now suing Georgia over that law, which caused Major League Baseball to move the All Star Game in response to Democrats’ shameless lying about its contents.

At this point, the lies have backfired badly enough that Georgia’s failed 2018 gubernatorial candidate, Stacy Abrams, and Sen. Raphael Warnock have been forced to reverse their position on Voter ID, just because polls show that voters support it so overwhelmingly.

This isn’t just a local story anymore. Democrats nationwide have made what looks like a coordinated choice to drop their opposition to Voter ID. The first sign of this surprising development came in their national voting law (which failed anyway). They thought of this as a way to move their bill forward, but what it actually does is make them look extremely silly for their years of dogged opposition and insistence that Voter ID is a racist voter-suppression plot.

Given the time and an appropriate push for Voter ID laws nationwide, voters can be convinced that this is just one of many falsehoods they tell on this issue.

The Biden administration has chosen to help illustrate this with a court fight in which facts and details meet the cold light of day. They cannot be glossed over, manipulated, fabricated, and selectively presented the way they were in the court of public opinion, where a Democrat-friendly media was all too willing to run interference. This is a very bad idea for Biden, and potentially a very good development for Republicans in Georgia.

From time to time, The Briefing will look in on Republican presidential aspirants to see how they are doing in positioning themselves early to run and gain conservative support.

Abbott: It isn’t exactly clear how Gov. Greg Abbott, R, will keep his promise to continue building a border wall “hundreds of miles long,” but it is already clear that it’s smart politics. The idea is popular enough to have raised half a million dollars in private money. Just as importantly, the announcement has helped him put pressure on the Biden administration’s weakest point — his handling (or non-handling) of the border crisis. The issue got so bad for Biden that he sent Vice President Kamala Harris to defuse it — which she promptly failed to do effectively.

It is an additional master-stroke to have President Trump tour the border with him.

DeSantis: Gov. Ron DeSantis, with his bill requiring Florida schools to teach civics and the destructive effects of communism, is showing why he is the non-Trump frontrunner for the Republican presidential nominee in 2024. This a great answer to the current nonsense of school districts pushing critical race theory on and its racialist tenets on children. Florida’s Board of Education also unanimously banned the teaching of critical race theory earlier this month.

With cultural forces besetting conservatives on all sides — between forced acceptance of transgender ideology and critical race theory — they would really like to someone who is on the offense.

Other Republican candidates hoping to win the nomination should take note of this. It’s a space in which others will surely want to compete.

Virginia: The three top Democrats on the statewide ticket — Terry McAuliffe, Hala Ayala, and Mark Herring — conspicuously snubbed the Virginia Police Benevolent Association’s candidate screening event last Thursday, to which they had all been invited. Before the Era of Wokeness McAuliffe and Herring had attended the event. The Republican nominees for governor, lieutenant governor, and attorney general all made an appearance.

This seems especially unwise for McAuliffe, who incidentally seems eager to grab every lightning rod he can. He also recently told a questioner that Critical Race Theory, which has taken multiple Northern Virginia school districts by storm (Loudoun County is wasting millions on a curriculum that teaches it) is just a “right wing conspiracy…a conspiracy theory.”

Given the visible reaction by parents in many school districts to this very-much-not-a-conspiracy-theory, McAuliffe is taking a huge risk here. This sort of behavior might help him avoid criticism from the far Left, but there are enough cops and police family members, and parents who don’t want their children brainwashed with racialist nonsense, that this issue could really damage both him and his party in elections over the next two years.

Texas: A new poll shows that, whatever his faults, Republican Gov. Greg Abbott has a positive approval rating, and that’s more than one can say about many other statewide politicians in Texas.

The poll tested a mostly useless question about whether people would support him running again, and also whether they support bids by former media darling Beto O’Rourke and factory Matthew McConaughey. Basically, nobody wants anybody to run. But the more conventional fav/unfav shows Abbot at 49%/43%, which is not bad after seven years in office. Beto is hated more than he is liked (34%/42%). McConaughey at least intrigues people (42%/20%), although his party affiliation is not yet clear and a large number of voters don’t know anything about him.

Wisconsin: Former Lt. Gov. Rebecca Kleefisch, the running mate of former Gov. Scott Walker, is the first formidable Republican candidate to enter the race (all but officially) against Gov. Tony Evers. Unless someone else gets in (Reince Priebus is a possible candidate), she will probably dominate the field.

Evers’ aggressive COVID action has been a big issue in the state, and the cause of enormous conflicts with the Republican state legislature. But that doesn’t necessarily make him a dead duck in such a competitive state.

Assuming a strong Republican year for Biden’s first midterm, Republicans have a reasonable chance of taking out Evers just because he is in the wrong place at the wrong time in a tough state. But this won’t be some kind of cake-walk. It will be a very close-fought race like the one in 2018 in which he defeated Walker by a nose.