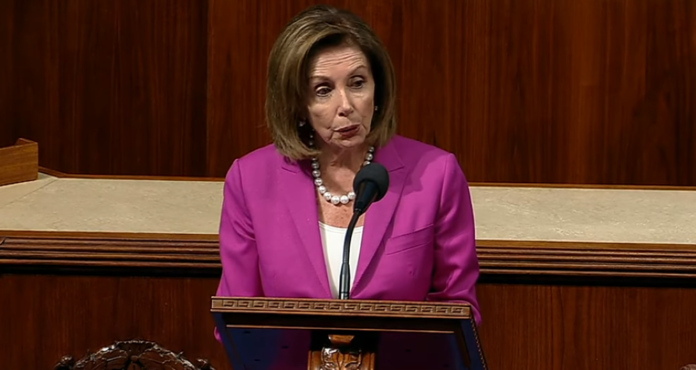 Feuding Dems: After a brief interlude in which Democrats united to attack President Trump, the woke foursome who have taken to calling themselves “the squad” went right back to accusing House Speaker Nancy Pelosi of both racism and sexism. Their appearance on CBS This Morning consisted mostly of Rep. Rashida Tlaib, D-Mich., interrupting the other three, and speaking about Rep. Alexandria Ocasio-Cortez, D-N.Y., as if she were a child, right in front of her.

But the most important part was this complaint about Pelosi: “I’ve done racial justice work in our country for a long time — acknowledge the fact that we are women of color, so when you do single us out, be aware of that and what you’re doing, especially because some of us are getting death threats, because some of us are being singled out in many ways because of our backgrounds, because of our experiences and so forth.”

Basically, here’s what happened: They chose to take public a disagreement with Pelosi. She disapproved of their social media attacks on other Democrats and called on them to stop it during a caucus meeting. They immediately responded by playing the race and sex cards.

Perhaps you have no sympathy for Pelosi, and perhaps she doesn’t deserve any, but this is much bigger than her. This ridiculous chapter in congressional history points to the unfortunate fact that this is how kids on college campuses are being taught to settle debates. Just call the other person a racist. No matter how ridiculous the accusation, it will put them back on their heels.

Americans of both parties who value freedom had better prepare themselves for the entry of this intellectually bankrupt mentality into the halls of power. The defense of Liberalism is going to require a bipartisan effort, and hopefully the Democratic Party’s leaders, now under assault, are starting to recognize that they have a real problem on their hands.

Democratic leaders are genuinely fearful about the effect these socialists are having on their party, to the point that they are leaking poll numbers showing how much damage the radical quartet is doing to the party’s image. The polling focuses on the non-college white voters — a demographic that backed Obama but then helped put Trump into office. Ocasio-Cortez and Rep. Ilhan Omar, D-Minn., had abysmal favorable ratings (22 and 9 percent, respectively) and high name recognition. Socialism was favored by just 18 percent of those surveyed.

For many election cycles in a row, Republicans have used Pelosi as their bogeyman while campaigning. But they may have found a new bogeyman.

Impeachment: “Resolved, that Donald John Trump, President of the United States, is unfit to be President, unfit to represent the American values of decency and morality, respectability and civility, honesty and propriety, reputability and integrity, is unfit to defend the ideals that have made America great, unfit to defend liberty and justice for all as extolled in the Pledge of Allegiance, is unfit to defend the American ideal of all persons being created equal as exalted in the Declaration of Independence, is unfit to ensure domestic tranquility, promote the general welfare and to ensure the blessings of liberty to ourselves and our posterity as…” et cetera, et cetera.

That’s a mouthful, and it’s only the preamble to Democratic Rep. Al Green’s impeachment resolution, which the House voted to kill last week.

As florid as that language is, the single article of impeachment is quite a bit more over-the-top. The resolution sought to impeach Trump for acting like an Internet troll. They especially didn’t like his language about having Rep. Ilhan Omar, D-Minn. (by implication he was referring to her) “go back” to Somalia and fix the problems there before telling him how to do his job.

Sure, the comments were inappropriate, xenophobic, and it was inevitable that someone would call them racist in this day and age, whatever Trump’s intentions. But they’re still just not good grounds for impeachment, as 137 Democrats, 194 Republicans, and Rep. Justin Amash, I-Mich., agreed.

There were 95 Democrats who voted to hold an impeachment debate on these grounds — nearly all of them untouchable in safe districts.Trump did what he could with this vote by publicly thanking Democrats for their support for his presidency — quite a hoot, really, and you can certainly imagine progressive primary challengers citing that in the future.

But this is going to happen again, and when it does, Republicans might want to consider a more aggressive strategy.

In 2007, Rep. Dennis Kucinich, D-Ohio, filed articles of impeachment against Vice President Dick Cheney. Although the House Democratic Majority’s leaders (the same ones as now) didn’t want to hold such a vote, House rules allow members to force votes on certain special or privileged resolutions like impeachment.

Democratic leaders moved for a vote to table (kill) the resolution. And Republicans voted with them….at first. Then, suddenly, dozens of GOP members changed their votes from “yea” (to kill impeachment) to “nay” (to debate impeachment). This caused an abrupt panic among Democrats, such that dozens of them started changing their votes, too. A few of them (including Rep. Green) wanted to end up on the winning side when the motion to table failed. More of them changed their votes from “nay” (to debate impeachment) to “yea” (against impeachment), when they realized the impeachment resolution was going to survive the motion.

Thus, the impeachment of Richard Cheney remained on the House floor. Democrats, who did not want to impeach Cheney, saved face by voting to refer the resolution to committee, where it died. But it was hilarious, and the 31 Democrats who changed their votes looked very dumb.

At that time, Republicans were beyond saving. None of this inside baseball was going to save them from the Great Recession that began a month later, or the Iraq War that seemed like it would never end. And Democrats were also a lot less “woke” back them. It was a lot easier for the party to hide a vote like this from its base.

This time, however, such a maneuver could be more effective. President Trump is more popular now — a lot more popular, actually — that President Bush was (close to 30 percent approval) at that point in his presidency. Moreover, Trump hasn’t started a major war and the economy is going really well.

So go ahead, why not hold an impeachment debate? It’s just a thought.

Kentucky: Democrat Amy McGrath’s entry into the race against Senate Majority Leader Mitch McConnell went so badly (we missed last week that she bailed on an MSNBC appearance) that she’s now drawing multiple primary challengers. It remains to be seen whether any of them catches fire, but retired Marine and farmer Mike Broihier officially got in last week. State Rep. Charles Booker, D, is also considering a run to be Kentucky’s first black senator, according to the local media. McConnell, though unpopular on paper (as in 2014), is overwhelmingly favored to win re-election at this point.

Maine: So far, Sen. Susan Collins, R, looks about as good for re-election as she can at this point, but billionaire presidential candidate Tom Steyer’s group, NextGen, is embracing her defeat as its “central goal.” The group plans to put at least $1 million into the state to get out the youth vote — although, as the Huffington Post wryly noted, Maine is the oldest of the 50 states on average.

Tennessee: Former Gov. Bill Haslam, R, announced he will not run for the Senate seat being left open by Republican Sen. Lamar Alexander’s retirement. Trump’s ambassador to Japan, Bill Hagerty, has resigned his position to run in the race. He already has Trump’s backing, although he might not have the primary to himself.

Iowa-4: It’s early to be looking too closely at House races, but this development is important. Bob Vander Plaats, president and CEO of the evangelical group The Family Leader, has officially turned against Rep. Steve King, R, and endorsed his Republican primary challenger, state Sen. Randy Feenstra.

King, who was elected to the House in 2002 as a standard-issue Christian free-market conservative, has in recent years come to defend and engage with white nationalists. It led to his being censured on the House floor and stripped of his committee assignments earlier this year.

This district, in Iowa’s northwest, is the only safe GOP House district in Iowa.