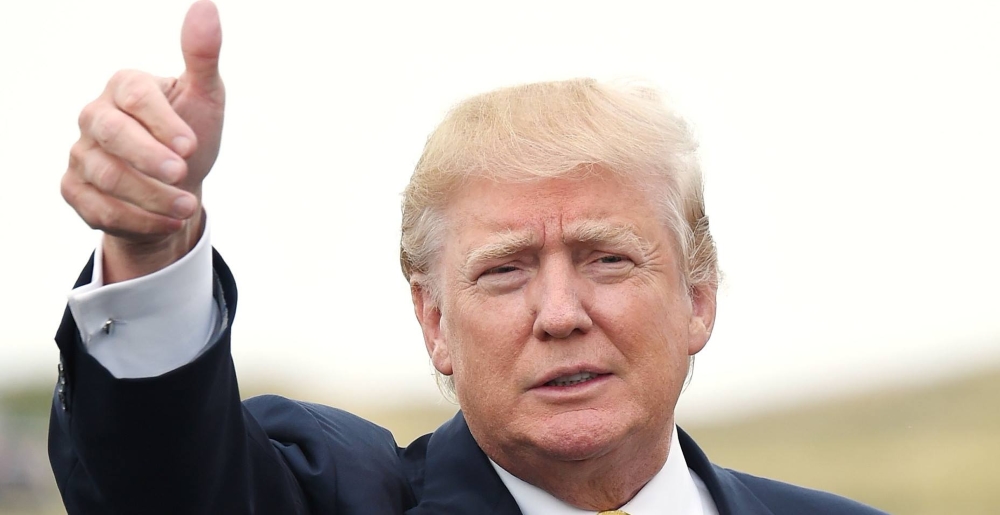 How many hundred times in the past year have you heard people write off Donald Trump over his latest outrage du jour, only to see him survive and even thrive over and over again?

We’ve come a long way since he called illegal immigrants rapists in his launch speech, insulted John McCain, and was forced into civil court over Trump University — just to name three out of more than a hundred applicable examples. Yet it’s now Fall 2016, he’s right there in the presidential race — not winning, perhaps, but well within striking distance in all the swing states he might need to become president.

Trump’s behavior and demeanor are unlike anything voters have seen before in a presidential candidate, at least in this country. And he’s managed to normalize himself in the public mind. Over and over again, he has sloughed off what seemed like a potential campaign-killer. And the public has largely learned to shrug off whatever his apparent problem happens to be at the moment.

So now that Trump is having arguably his campaign’s toughest week yet, we’re finally going to get an answer as to whether anything can stop the Donald.

Debate: The polls (the real ones, anyway) are univocal in stating that Hillary Clinton won the first debate. The real question is how much or whether it matters.

After all, when you’re dealing with a candidate as unusual as Trump, debate performance (like nearly everything else) becomes a much more subjective question. Clinton may be a better candidate for the debate team, but…so what? She’s debating Trump, and the fact that he acts like Trump is already priced in.

Only the scoreboard matters — it has to be left to the results in polls of the election itself, of which there have been only a few showing a slight uptick for Clinton.

The main event: Also, Trump didn’t necessarily need to win the first debate. As we put it last time, he just had to avoid any serious embarrassment. He pretty much did that, at least during the period in which the debate itself occurred, and in fact he had a few strong moments early on. It was later — early one morning later last week — that his more serious unforced error occurred.

As far as the debate itself goes, Trump’s biggest problem was that he missed so many opportunities to strike Clinton that he might have exploited a lot better with a bit more preparation.

Just to give one example: Sid Blumenthal’s participation in stoking rumors about President Obama’s birthplace in 2008 — the “racist birther lie” that Clinton kept referring to during the debate — is not an easy thing to explain to the layman. Blumenthal’s closeness to Clinton, the fact that she tried to bring him into the State Department after this happened, and the fact that she rewarded him anyway with a large Clinton Foundation paycheck when it didn’t work out are all important parts of the story. Trump wasn’t prepared to offer a short version. People familiar with the controversy surely understood what Trump meant when he called Clinton “holier than thou,” but Trump was reduced to pointing viewers to the Internet to look up facts — something he did more than once in this debate, always for the same reason.

Post-debate: The bar was higher for Clinton in the first debate, because she needed it to pull her campaign out of a serious tailspin that had been caused by her simultaneous outburst of legal and health problems. The worst result of the debate itself for Trump is that she got what she needed. The news cycle moves quickly, and Clinton’s above-adequate performance helped drown out a few of her more inconvenient problems.

Along the way, she’s gotten some big help from Trump himself. The most potentially damaging debate moment for Trump didn’t come until well after the event was over — Trump’s 3 a.m. Twitter tirade over a former Miss Universe whom he had called “Miss Piggy.” Clinton had brought her up apropos of nothing during the debate itself, and Trump’s reaction demonstrated that she had definitely gotten under his skin. It’s likely this issue would never have taken off without his help. Even if it doesn’t end Trump, it’s certainly a change from the pre-debate environment, in which he was pressing his advantages over her and posting strong poll numbers.

Tax docs: Trump has a reason for not releasing his tax returns — good or bad. But he probably didn’t expect the New York Times to get hold of his return from 1995, showing a loss of nearly a billion dollars. The Times noted that this could have allowed him to avoid paying taxes for 18 years, although there is no evidence that he didn’t pay any taxes during that period.

As bad as it looks, it is highly unlikely that his 1995 return is representative of too much — he’d probably be living under a bridge if most or even many of his ventures lost that kind of money. But the possibility that he paid no taxes certainly isn’t doing him any favors. Not that the issue necessarily carries quite the weight that some people would suggest, but Trump has only one good way to put it to bed: Release his tax returns.

Add this all up, and Trump had a really rough week. He’s been under the gun before, but usually not from so many directions with so many negative stories. Don’t be surprised if it shows up in a few upcoming polls. If not, then maybe he really is bulletproof.

Clinton-Sanders: Clinton did suffer a negative story this week when was secretly recorded audio from a February fundraiser was released, in which Clinton discussed the “lost generation” of Bernie Sanders supporters who are now “living in their parents’ basement.” Sanders was asked about this on Sunday. No sooner had he commented that yes, the quote concerned him, than Clinton backed out of the joint events they had been scheduled to do together this week. Sanders will instead stump for her alone.

Nebraska: One bit of positive news for Trump: A poll of Nebraska’s second congressional district has him up nine points. Between that and his double-digit lead in Maine’s second district, he stands to win two electoral votes that seemed in doubt.

Granted, a lot of other things would have to break his way — including Ohio, Florida, Iowa, Nevada, North Carolina, and a handful of other states besides, perhaps including Pennsylvania. But even if that seems like a lot, none of the dominoes that have to fall for him to win are unthinkable, at least in isolation. The electoral math for Trump is still difficult, but it’s not impossible. So there’s a small bit of consolation for Trump fans, then, after a difficult week for Trump himself.