Republicans are done in South Carolina. On to Super Tuesday, March 1, or the SEC primary, if you prefer. On the Republican side, more than 600 delegates are at stake — more than half of what a candidate needs to win the nomination. Material resources are running out for some of the candidates, but time is running out for all of them.

Both parties have a slight detour before this. Republicans caucus in Nevada on Tuesday. Democrats hold their vote in South Carolina on Saturday.

On the Democratic side, Hillary Clinton seems to have gotten her campaign in order. Her win in Nevada was not impressive, but it helps squelch a nascent threat just ahead of her expected win South Carolina.

On the Republican side, the establishment can’t get a firm hold of the race, but has at least seen some consolidation. Donald Trump won — again, not overwhelmingly, but convincingly. Some see a silver lining for Marco Rubio in his unexpected second-place finish, but the problem is that Trump has a “yuge” lead in what few polls there are of Nevada. If they can’t find a way to blunt his momentum before March 1, it won’t be easy for Rubio or Ted Cruz to stop him from steamrolling his way to the nomination.

Winners and losers from this weekend’s races.

Hillary Clinton: Winner. She got the win in Nevada, albeit a narrow one, 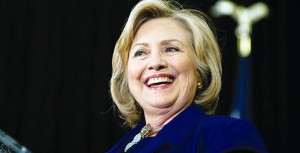 and that’s a big relief for her ailing campaign. It puts some wind in her sails going into this Saturday’s expected win in South Carolina, which will probably confirm her status as the indisputable frontrunner.

Maybe Michael Bloomberg will stop firing up the engines for his own third-party run.

The downside for Clinton (aside from her unimpressive performance with Hispanic voters there) is that turnout was so much lower this time than it has been in the past. In 2008, about 120,000 Democrats caucused.

In three states in a row, then, Republican contests have been setting records and Democratic ones have drawn less interest than in the past. This is a mirror image of what happened in 2008, at the end of George W. Bush’s second term. It just one of many indicators that the excitement and attention to the race are all on the Republican side, and that unless they blow it by nominating someone who can’t win, they have a decent shot at the White House.

Clinton’s main weakness for November’s election continues to show itself, too. Among those telling the exit pollsters that their big issue in the race is honesty, Bernie Sanders won by a 70-point margin. That margin is mind-blowingly large, but it just wasn’t enough in this Democratic contest.

Bernie Sanders: Loser. A near-tie isn’t that bad, but Sanders really could

have used a win in Nevada. Caucuses should benefit an enthusiasm candidate like him, and he just blew a chance at his second win in a row.

Now, assuming that no miracles occur in South Caroline, he’ll head into Super Tuesday with two consecutive losses, and a perception that it’s probably all done. He won’t be out of it completely, but he’s clearly missed a big opportunity.

Donald Trump: Winner. You can’t argue with success. His win in South

Carolina was smaller than some polls predicted, but it was a solid win of nearly ten percentage points. He did well throughout the state, but especially well in Horry County, home to Myrtle Beach. If anything, his recent tangle with Pope Francis helped him in a state that has very few Catholics and a long history of distrust for them.

Trump demonstrated on Saturday that he will be a formidable force going forward, nearly guaranteed to pull between 25 and 33 percent of the vote wherever he’s on the ballot. Unless something persuades Republican primary voters otherwise, and it’s not clear what that something (e.g., video of Trump murdering someone?) could possibly be.

Is Trump’s base good enough to win?  We shall see. But it was enough to win big in South Carolina, whose winner-take-all delegate rules are especially unforgiving — Trump won all of the delegates. That won’t be the case in many of the March 1 states, but some states have high thresholds for runners-up to take anything home.

Trump engaged in a great deal of clownish behavior before and after his victory. For example, he questioned Marco Rubio’s eligibility for the presidency in addition to Ted Cruz’s (he won’t have the opportunity to question Bush’s, but don’t put it past him). But his clownish behavior, as much as it would sink any other candidate, does not put off his supporters — in fact, they seem to revel in the fact that he says things he knows aren’t true. And that makes him an even bigger winner.

One potential weak point going forward is the revelation that Trump has been lying all along about his supposed opposition to the Iraq War. Newly uncovered audio shows that he supported it, albeit with some ambivalence. Even so, that would probably only deter a small number of his supporters.

Marco Rubio: Winner. It wasn’t the most triumphal recovery from his

disastrous performance in New Hampshire, but it was a recovery, and he’ll take it.

Jeb’s departure from the race doesn’t just free up his 8 percent (or whatever) of the vote. That will mostly go to Rubio, but the more important thing is that it also frees dozens of elected lawmakers in the Super Tuesday states, some of them influential, to back Rubio. They already began to do so in Nevada over the weekend, as Sen. Dean Heller and Rep. Mark Amodei announced their support.

Most importantly, it means that those millions in Jeb SuperPAC dollars that have been spent against Rubio up until now will be in his service, if they keep entering into the race at all.

As Rubio put in his speech after the results, it’s now a three-man race. Rubio is still not the frontrunner, and it will be no small task to assemble an anti-Trump coalition. But he has cleared his lane well enough that the path exists to a Rubio nomination.

The catch is, he has to start finishing first at some point. He hasn’t done that yet, but Nevada provides a clear opportunity.

Ted Cruz: Loser. The spin from his campaign about the result Saturday night

cannot be trusted. Here’s why:

Cruz has a harder path than Rubio going forward because Rubio can count on a certain amount of consolidation of resources and voters now that Jeb Bush is out. Cruz has nothing like that to look forward to as long as Trump remains in the race. Although most of Rubio’s supporters would choose him over Trump, there will always be enough money and probably enough voters to sustain an anti-Trump anti-Cruz candidate through June.

Jeb Bush: Loser. Well, obviously, he lost badly enough that he got out. It just wasn’t his year, and you can probably — strange as it may sound — blame Donald Trump for making it that way. The tone of this race has been such that all of his SuperPAC millions just weren’t going to do a thing for him. It would be difficult to find a clearer example of the fact that money alone doesn’t buy elections.

With the direction the Republican electorate is moving, it seems like it may never be Jeb’s year. But of course, that isn’t necessarily the case. People said such things about permanent political changes after Ross Perot disrupted the Republicans’ world in 1992, and his strange coalition is now a distant memory.