Chris Christie is laying the blame for attacks on cops in Nevada, Illinois and Texas at the feet of President Obama.

The New Jersey governor went on to say that he would reverse the trend of lawlessness should he become president:

Law and order will restore some sense of normalcy to people’s lives. And we’ll stand behind our law enforcement officers around the country.

Read the rest of the story from Politico here. 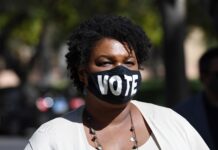